Zulema María Eva Menem (born 25 December 1970) is the daughter of President of Argentina Carlos Menem. To avoid confusion with her mother Zulema Fátima Yoma, since both could be called "Zulema Menem", the media refers to her as Zulemita.

After her parents' divorce, she assumed the role of First Lady of Argentina. [1] 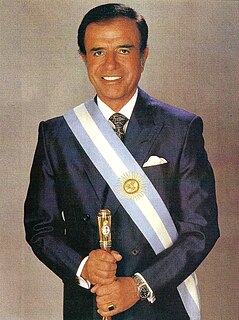 Carlos Saúl Menem was an Argentine lawyer and politician who served as the President of Argentina from 1989 to 1999. Ideologically, he identified as a Peronist and supported economically liberal policies. He led Argentina as president during the 1990s and implemented a free market liberalization program to establish a country chronically plagued by political and economic crises. He served as President of the Justicialist Party for thirteen years, and his political approach became known as Federal Peronism.

The politics of Argentina take place in the framework of what the Constitution defines as a federal presidential representative democratic republic, where the President of Argentina is both Head of State and Head of Government. Legislative power is vested in the two chambers of the Argentine National Congress. The Judiciary is independent of the Executive and the Legislature. Elections take place regularly on a multi-party system. 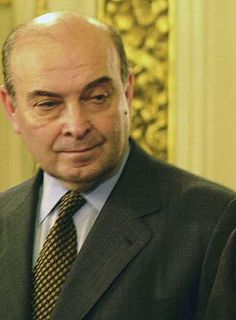 Domingo Felipe Cavallo is an Argentine economist and politician. Between 1991 and 1996 he was Economic Ministry of Argentina during Carlos Menem presidency. He is known for implementing the Convertibility plan, which established a currency board with the dollar and allowed the dollar to be used for legal contracts. This brought the inflation rate down from over 1,300% in 1990 to less than 20% in 1992 and nearly to zero during the rest of the 1990s. He implemented pro-market reforms which included privatizations of state enterprises. Productivity per hour worked during his 5-years as minister of Menem increased by more than 100%.

Eduardo Alberto Duhalde is an Argentine Peronist politician who served as the interim President of Argentina from January 2002 to May 2003. He also served as Vice President and Governor of Buenos Aires in the 1990s.

Néstor Carlos Kirchner Jr. was an Argentine lawyer and politician who served as the President of Argentina from 2003 to 2007, Governor of Santa Cruz Province from 1991 to 2003, Secretary General of UNASUR and the first gentleman during the first tenure of his wife, Cristina Fernández de Kirchner. He was President of the Justicialist Party from 2008 to 2010. Ideologically, he identified himself as a Peronist and a progressive, with his political approach called Kirchnerism. 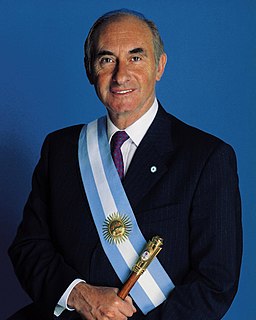 Fernando de la Rúa was an Argentine politician and a member of the Radical Civic Union (UCR) political party who served as President of Argentina from 10 December 1999 to 21 December 2001. De la Rúa was born in Córdoba; he entered politics after graduating with a degree in law. He was elected senator in 1973 and unsuccessfully ran for the office of Vice President as Ricardo Balbín's running mate the same year. He was re-elected senator in 1983 and 1993, and as deputy in 1991. He unsuccessfully opposed the pact of Olivos between President Carlos Menem and party leader Raúl Alfonsín, which enabled the 1994 amendment of the Argentine Constitution and the re-election of Menem in 1995.

Alfredo Enrique Nalib Yabrán was a businessman in Argentina, with close links with the government, in particular with the administration of Carlos Saúl Menem. 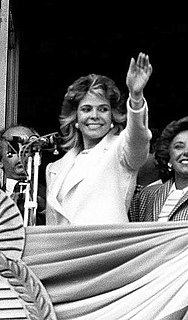 Zulema Fátima Yoma was the First Lady of Argentina from 1989 until 1991, when she got divorced from President Carlos Menem.

The Armenian community in Argentina is the largest in Latin America totaling approximately 120,000 members.

Arab Argentine refers to Argentine citizens or residents whose ancestry traces back to various waves of immigrants, largely of Arab ethnic, cultural and linguistic heritage and/or identity originating mainly from what is now Lebanon and Syria, but also some individuals from the twenty-two countries which comprise the Arab world such as Palestine, Egypt and Morocco. Arab Argentines are one of the largest Arab diaspora groups in the world.

Diplomatic relations between the countries Argentina and Lebanon, have existed for over a century. Both nations enjoy friendly relations, the importance of which centers on the history of Lebanese immigration to Argentina. There are approximately 1.5 million Argentines of Lebanese descent. The Lebanese community in Argentina is the third largest immigrant community in the country and Argentina is host to the second largest community in Latin America. Both nations are members of the Group of 24 and the United Nations.

The Argentine legislative elections of 1991 were held on four dates, 11 August, 8 September, 27 October and 1 December, though most polls took place on 8 September. Voters chose their legislators and governors and, with a turnout of 80%.

Federal Peronism, also known as Dissident Peronism and Menemism, are the informal names given to a political alliance between Justicialist Party figures, currently identified mostly by its opposition to ruling Kirchnerism, the left-wing faction.

Menem is a surname. Notable people with the surname include:

Zulema is a Spanish-language feminine given name that may refer to:

Amalia Beatriz "Amira" Yoma is an Argentine political advisor and restaurateur. She is best known for being the Director of Hearings in the presidential administration of her then brother-in-law Carlos Menem, and for being charged in the drug money laundering scandal which came to be called Yomagate.