Last updated May 02, 2020
For other uses, see Zulfiqar (disambiguation).

He comes from a Baloch, Khosa tribe. He was born in Bahadurgarh, Dera Ghazi Khan, Pakistan. He became the Tumandar of the Khosa in 1935 after the death of his father, Dost Muhammad Khan Khosa. [2] He was the Governor of the Punjab from 17 August 1999 to 12 October 1999. He is an incumbent senator from Punjab, Pakistan, since 2012.

He has three Sons

Khosa may refer to the following:

Mazari is one of the biggest tribe of Baloch mostly they live in Pakistan. Mazari is derived from the Balochi word mazar, which means "Tiger" in the Balochi language. Rojhan-Mazari, a town in the Rajanpur District of the Punjab near the inter-provincial borders of Balochistan, Sindh and Punjab, is the stronghold of the Mazari tribe.

Mengal is a Brahui tribe.

Pallandri, also spelled Palandri, is a town in Sudhanoti district of Azad Kashmir. It is located at latitude 33° 42′ 54″ N, longitude 73° 41′ 9″ E, 90 km (56 mi) from Islamabad, the capital of Pakistan. It is connected with Rawalpindi and Islamabad through Azad Pattan road. The main tribe of Pallandri is the Sudhan tribe. 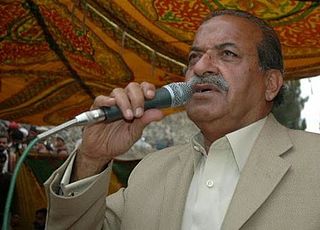 Mehtab Abbasi is a Pakistani politician from Abbottabad who began his political career as an independent candidate in the 1985 election. He won seats in both the provincial and national assembly. He also won all subsequent elections up to that of 2013.

Sardar Muhammad Yaqoob Khan Nasar is a Pakistani politician and current Member of the Senate of Pakistan. He was the Interim president of the Pakistan Muslim League (N) in 2017. He succeeded Nawaz Sharif after his disqualification by the Supreme Court of Pakistan. 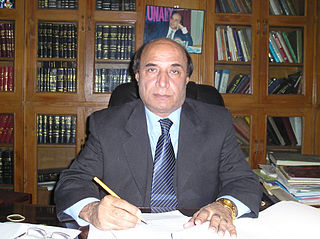 Muhammad Latif Khosa was the Governor of Punjab, and a politician representing Pakistan People's Party. A former senator and a former Attorney General of Pakistan, Latif Khosa was appointed as the Governor of Punjab by the President of Pakistan after the murder of late-Governor Salman Taseer on 11 January 2011. He was appointed the attorney general on 19 August 2008. Also served as chairman of the executive committee (CEC) of Pakistan Bar Council. He co-authored an electoral fraud report with former Prime Minister Benazir Bhutto shortly before her assassination in December 2007. Khosa was one of Bhutto's top aides.

Malik Allahyar Khan was a parliamentarian from Pakistan.

Sardar Ahmad Ali (1914–1993), was the only son of Sardar Muhammad Ali and the Chief of the Arain tribe. Like his ancestors he was the head of the Apex body of the Arain Clan called Anjuman-e-Arayan-e-Pakistan which was founded by his ancestors. Besides serving the country and its people, in various capacities, he served the cause of the Arain peoples throughout his life.

Muhammad Saif-ud-Din Khosa is a Pakistani politician who had been a member of the National Assembly of Pakistan from 2008 to May 2012.

The First Shehbaz Sharif provincial cabinet was formed by Shehbaz Sharif in 1997 to begin a new government following the 1997 Pakistani general election.

Sardar Muhammad Mohiuddin Khosa is a Pakistani politician who has been a member of the Provincial Assembly of the Punjab since August 2018.

Events from the year 2019 in Pakistan.