Zulu Clements (1 August 1876 – 14 December 1943) was the president of the California Federation of Business & Professional Women's Clubs. She was the traffic manager for the Leslie Salt Co, and touted as "Woman Salt Baron". [1]

Clements was the Traffic Manager for the Leslie-California Salt Co, the largest salt company in the United States of the time. She was known among the San Francisco women as the dollar sign: no matter how much money was needed or for what purpose, Clements produced it from some source. [2] [1]

She was a member of the Women's Traffic Club and the East Bay Country Club. [2]

A former resident of Chicago, Zulu Clements moved to California in 1910 and lived at 609 Sutter Street, San Francisco, California. [2] 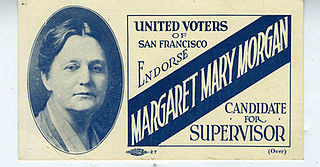 Margaret Mary Morgan was a U.S. suffragist, printing business owner, politician, child welfare advocate and, in 1921, the first woman ever elected to the San Francisco Board of Supervisors.

The General Federation of Women's Clubs (GFWC), founded in 1890 during the Progressive Movement, is a federation of over 3,000 women's clubs in the United States which promote civic improvements through volunteer service. Many of its activities and service projects are done independently by local clubs through their communities or GFWC's national partnerships. GFWC maintains nearly 70,000 members throughout the United States and internationally. GFWC remains one of the world's largest and oldest nonpartisan, nondenominational, women's volunteer service organizations. The GFWC headquarters is located in Washington, D.C. 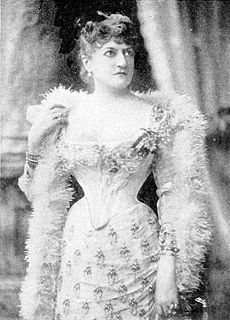 Miriam Florence Squier Leslie was an American publisher and author. She was the wife of Frank Leslie and the heir to his publishing business, which she developed into a paying concern from a state of precarious indebtedness. After her husband's death, she changed her own name to his, Frank Leslie. She made Carrie Chapman Catt a residuary legatee of her estate, to support enfranchising women. The activist established the Leslie Woman Suffrage Commission for this purpose.

Women have a long history in American baseball and many women's teams have existed over the years. Baseball was played at women's colleges in New York and New England as early as the mid-nineteenth century; teams were formed at Vassar College, Smith College, Wellesley College, and Mount Holyoke College. An African American women's team, the Philadelphia Dolly Vardens, was formed in 1867.

Leslie Michael O'Connor was an American lawyer and professional baseball executive. He was the assistant to the Commissioner of Baseball from January 1921 until the death of Commissioner Kenesaw Mountain Landis on November 25, 1944; then he filled the void as acting commissioner until the election of Happy Chandler as Landis' successor on April 24, 1945. After spending another six months in the commissioner's office as Chandler's top assistant, O'Connor became general manager of the Chicago White Sox of Major League Baseball from November 1945 through November 1948, and he later served as president of the Pacific Coast League. 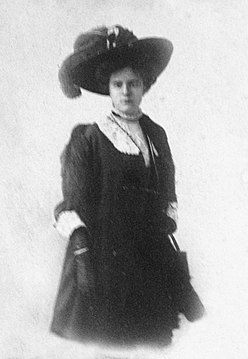 Alice Brown Chittenden was an American painter based in San Francisco, California who specialized in flowers, portraits, and landscapes. Her life's work was a collection of botanicals depicting California wildflowers, for which she is renowned and received gold and silver medals at expositions. She taught at the Mark Hopkins Institute of Art from 1897 to 1941.

Lillien Jane Martin (1851–1943) was an American psychologist. She published over twelve books. Martin experienced ageism and sexism as an early woman in psychology.

Martha Louise Rayne (1836–1911) was an American who was an early woman journalist. In addition to writing and editing several journals, she serialized short stories and poems in newspapers such as the Chicago Tribune, the Detroit Free Press, and the Los Angeles Herald. In addition to newspaper work, she published a guidebook of Chicago, etiquette books, and several novels. In 1886, she founded what may have been the first women's journalism school in the United States and four years later became a founding member and first vice president of the Michigan Woman's Press Association. Rayne was posthumously inducted into the Michigan Journalism Hall of Fame in 1998 and the Michigan Women's Hall of Fame in 2002.

Cora Louise Boehringer was the first female superintendent of schools in Yuma County, Arizona and the first woman to be elected to office in the state. She has been called "the mother of the Arizona educational system". In 2008 she was inducted into the Arizona Women's Hall of Fame. 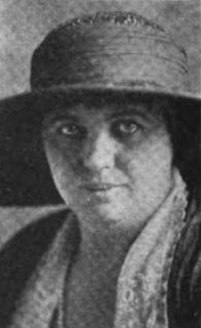 Oda Hunt Faulconer was an early 20th century lawyer and judge and the president of the Bank of Italy, San Fernando, and West Adams State Bank, Los Angeles.

Una Richardson Winter was a Southern Californian club woman, women's suffrage leader, and director of the Susan B. Anthony Memorial Committee of California.

Lotta Hetler James was a public speaker, active in civic, church and community projects, and was a candidate for Governor of California.

Abigail Keasey Frankel was a prominent club and civic worker of Portland. When the Oregon Federation of Business and Professional Women was formed, she was its first President. 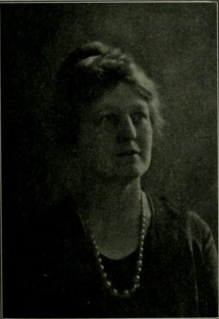 Caroline M. Estes Smith was the first woman manager of the Philharmonic Orchestra of Los Angeles.

Fannie Jean Black was the president of the San Francisco California Club from 1910 to 1912 and the chairman for San Francisco County on Woman's Auxiliary Board for the Panama–Pacific International Exposition in 1915.

Ada Margaret Brayton was a life member of the American Astronomical Society, and co-author of the monumental book, Spectroscopic Absolute Magnitudes and Distances of 4719 Stars that increased the number of stars of known distance one hundred-fold. 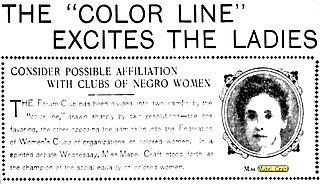 Mabel Craft Deering was a San Francisco Bay Area socialite, journalist and supporter of progressive causes such as women's suffrage and the admission of black women to a national women's organization. As a University of California student, she protested the awarding of a medal for scholarship that was given to a man instead of to her.