Zundui Naran (born 13 February 1967) is a Mongolian former cyclist. He competed in the team time trial at the 1992 Summer Olympics. [1]

Mongolia competed at the 1992 Summer Olympics in Barcelona, Spain. 33 competitors, 27 men and 6 women, took part in 31 events in 8 sports. 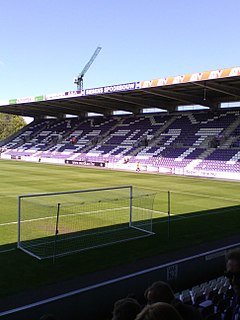 The Olympisch Stadion or Kielstadion[ˈkilstaːdijɔn]) was built as the main stadium for the 1920 Summer Olympics in Antwerp. For those games, it hosted the athletics, equestrian, field hockey, football, gymnastics, modern pentathlon, rugby union, tug of war, weightlifting and korfball (demonstration) events. Following the Olympics it was converted to a football stadium. Its current tenant is K Beerschot VA , a Belgian football club. There are no remnants of the Olympic athletics track.

Naran is a medium-sized town in upper Kaghan Valley in Mansehra District of Khyber Pakhtunkhwa province of Pakistan. It is located 119 kilometers (74 mi) from Mansehra city at the altitude of 2,409 meters (7,904 ft).It is located about 65 kilometers (40 mi) away from Babusar Top. It is a popular tourist attraction locally as well as internationally.

Naran may refer to:

Naran is a village in Shamil Rural District, Takht District, Bandar Abbas County, Hormozgan Province, Iran. At the 2006 census, its population was 137, in 30 families.

Naran is a village in Rud Ab-e Gharbi Rural District, Rud Ab District, Narmashir County, Kerman Province, Iran. At the 2006 census, its population was 713, in 166 families.

Naran-e Olya is a village in Sarduiyeh Rural District, Sarduiyeh District, Jiroft County, Kerman Province, Iran. At the 2006 census, its population was 148, in 34 families.

Naran is a village in Naran Rural District, in the Central District of Sanandaj County, Kurdistan Province, Iran. At the 2006 census, its population was 649, in 191 families.