The Zunfthaus zur Haue or Haus zur Haue is situated at the Limmatquai promenade between Münsterbrücke and Rathausbrücke. It is the guild house of the Zunft zum Kämbel, meaning the guild of the merchants and traders. Neighbored by the Saffran, Zimmerleuten, and Rüden guild houses, it is one of the historically notable buildings in Zürich, Switzerland. The building also houses the relatively expensive restaurant of the same name.

Zunft zum Kämbel was originally a guild of food dealers and wine merchants. Its first Trinkstube (tavern and association meeting place) was located near the town hall. In 1358, the Zürich knight Götz Mülner II had sold sovereignty rights granted by Emperor Louis of Bavaria to the city of Zürich. The newly acquired possessions were administered by an Obervogt with its administration centre in the "Haue" building. [1] Their guild house was first mentioned in a 1389 document as Kembel. [2] In 1442 the building was in the possession of salt merchants, and from 1450 it was known as the "Salzlütenhus", "Houw", or "Salzhouw". The term Houw is derived from the axe featured on the salt merchant's coat of arms. In 1487 the guild acquired the House zum Kämbel which is still located at the Münsterhof 18. The siting at the Münsterhof plaza is seen as a deliberate distancing from the noble guild houses of the more prominent guilds in Zürich. [3] In 1532, the cloth merchant Konrad Rollenbutz acquired the property and gave it to his two sons. From the second half of the 16th century, the "Haue" was in the possession of Salomon Hirzel-Rollenbutz (1544–1605) and his son, the Zürich mayor Salomon Hirzel (1580–1652). In 1781, the building was the home of Rudolf Hirzel Rordorf-Sprüngli. The Haue building was sold to the colonial goods merchant Beckert, being its last private owner, in 1878. On 31 May 1956 – 150 years after its formal dissolution – the newly established Gesellschaft zum Kämbel bought the Haue building. Since 1980, it has housed a restaurant (Weinstube).

The present "Haue" building at the Limmatquai was originally an ensemble of three formerly separate buildings: the upper and lower "Wetzwilerhus", first mentioned in 1373, and the "Ropoltzhus". All three were later rebuilt into the complex that is the building as it exists today. The buildings near the town hall at the present Limmatquai were among the most desirable private houses, the town hall being not only the political but also the economic center of the city. A memorial plate and the deer on the roof are reminiscent of times when the family of Salomon Hirzel was the owner of the house.

On the Murerplan of 1576, the building can be seen on the right shore of the Limmat, north of the Haus zum Rüden, on the so-called Reichsstrasse (imperial street) which later formed the present Limmatquai. Around 1878, the colonial goods merchant Beckert rebuilt the facade and decorated it with painted ornaments and Gothic windows. The prominent crow-stepped gables were built by Beckert's nephew, Albert Beckert-Irniger. The guild hall on the first floor was renovated by the architect Armin Meili in 1979, and a restaurant was established in 1980. 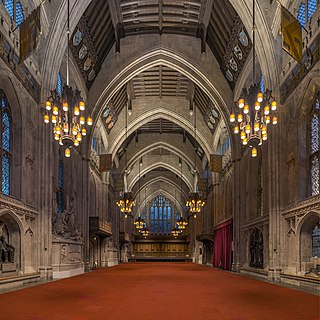 A guildhall is either a town hall, or a building historically used by guilds for meetings and other purposes, in which sense it can also be spelled as "guild hall" and may also be called a "guild house". It is also the official or colloquial name for many of these specific buildings, many of which are now museums. 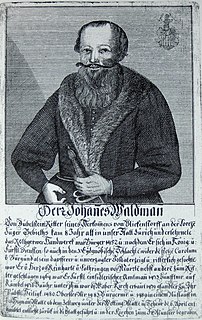 Hans Waldmann was mayor of Zurich and a Swiss military leader. Born in Blickensdorf near Zug, he married well and became Squire of Dubelstein. He served as Mayor of Zurich between 1483-1489 and was beheaded on the 6 April 1489 following a peasant revolt. 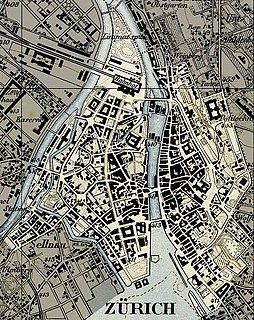 Die Altstadt in the Swiss city of Zürich encompasses the area of the entire historical city before 1893, before the incorporation of what are now districts 2 to 12 into the municipality, over the period 1893 to 1934. Die Altstadt approximately corresponds to the area enclosed by the former city ramparts, and is today within the administrative area of the city called Kreis 1.

The Lindenhof is a moraine hill and a public square in the historic center of Zürich, Switzerland. It is the site of the Roman and Carolingian era Kaiserpfalz around which the city has historically grown. The hilltop area—including its prehistoric, Roman, and medieval remains—is listed as a Swiss heritage site of national significance. 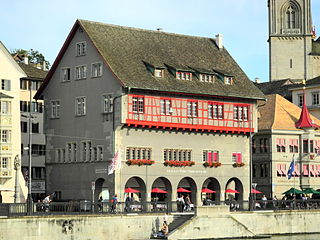 The Haus zum Rüden building is the assembly hall of the Gesellschaft zur Constaffel and one of the historically notable buildings in Zürich, Switzerland. It is situated at the Limmatquai promenade in Zürich, Switzerland, opposite of the Münsterhof plaza respectively the Zunfthaus zur Meisen, and neighboured by the Zimmerleuten, Kämbel and Saffran guild houses. 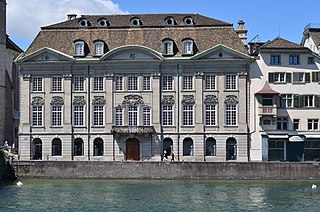 The Zunfthaus zur Meisen is the guild house of the Zunft zur Meisen. It is one of the many historically valuable buildings in the Lindenhof quarter in Zürich, Switzerland, and also housed the porcelain and faience collection of the Swiss National Museum by April 2018. It is situated at the Münsterhof and the Münsterbrücke, a bridge over the river Limmat, opposite the upper Limmatquai with the Constaffel, Zimmerleuten, Kämbel and Saffran guild houses. 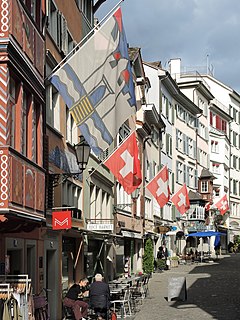 Augustinergasse is a medieval lane that today is part of the innercity pedestrian zone of Zürich, Switzerland. It is named after the former Augustinian Abbey that is now Augustinerkirche, the former church of the convent that was disestablished in 1525. Once, it was one of the nodal points of road and public transportation between Münsterhof, St. Peterhofstatt, the present Münzplatz plaza at the former abbey, and one of the gates and fortifications of the medieval town walls. Today, as well as the Limmatquai, Augustinergasse is a section of the southern extension of the Seeuferanlage promenades that were built between 1881 and 1887, and one of the best known visitor attractions of the oldest area of the city of Zürich.

Münsterhof is a town square situated in the Lindenhof quarter in the historical center of Zürich, Switzerland. Münsterhof is the largest town square within the Altstadt of Zürich, and is surrounded by medieval buildings. The area forms part of the southern extension of the Quaianlagen promenades of Zürich's lakefront.

The following is a timeline of the history of the municipality of Zürich, Switzerland.

Turicum was a Gallo-Roman settlement at the lower end of Lake Zurich, and precursor of the city of Zürich. Situated within the Roman province of Gallia Belgica and near the border to the province of Raetia, there was a tax-collecting point for goods traffic on the waterway Walensee–Obersee-Zürichsee–Limmat–Aare–Rhine. 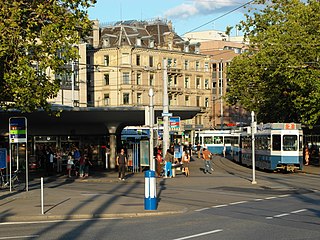 Bellevueplatz is a town square in Zürich, Switzerland built in 1856. Named after the former Grandhotel Bellevue on its north side, it is one of the nodal points for roads and public transportation in Zürich, as well as an extension of the quaysides in Zürich that were built between 1881 and 1887. 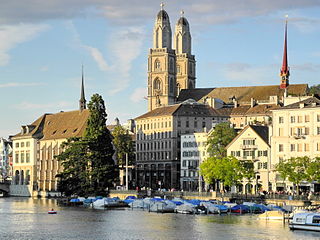 Limmatquai is a street in the Swiss city of Zürich. It is named after the Limmat, and it follows the right-hand (eastern) bank of that river for about 1 kilometre (0.6 mi) through the Altstadt, or historical core, of the city. The street was once important for both road and public transportation, but today sections of it form a pedestrian zone shared with Zürich's trams, effectively forming a northern extension of the Seeuferanlage promenades that ring the shores of Lake Zürich. 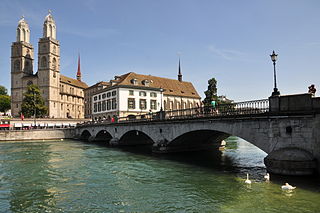 Münsterbrücke is a pedestrian and road bridge over the Limmat in the city of Zürich, Switzerland. It is listed in the Swiss inventory of cultural property of national and regional significance. It is indirectly named after two Münster (minsters), the Fraumünster and Grossmünster. 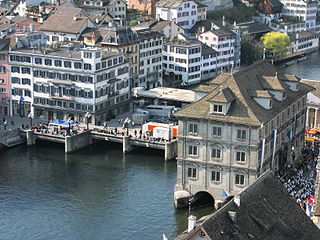 Rathausbrücke is a pedestrian bridge which crosses the river Limmat in Zürich, Switzerland. It is colloquially named Gmüesbrugg, and is a popular public square connecting Limmatquai, and the Weinplatz plaza and the historical Schipfe quarter.

The Zunfthaus zur Zimmerleuten at the Limmatquai promenade, situated between Münsterbrücke and Rathausbrücke, is the guild house of the Zunft zur Zimmerleuten, meaning the guild of the carpenters. Neighboured by the Saffran, Kämbel and Rüden guild houses, it is one of the historically notable buildings in Zürich, Switzerland. The building also houses the relatively expensive restaurant of the same name.

Zunfthaus Zur Saffran is a historically significant building in Zürich, Switzerland. It is located along the Limmatquai promenade between Münsterbrücke and Rathausbrücke. It is close to the Kämbel, Zimmerleuten and Rüden guild houses. The building is listed in the Swiss inventory of cultural property of national and regional significance as a major object of regional importance. 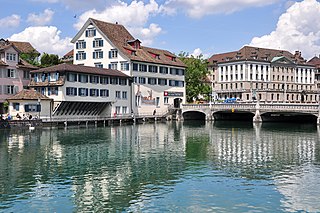 Oetenbach was a Dominican nunnery in the medieval municipality of Zürich in Switzerland. Oetenbach was named after the small stream of the same name at its first location at Zürichhorn, situated outside of the European Middle Ages town walls, but moved to the present Sihlbühl. The nunnery was abolished on occasion of the Reformation in Zürich – the Waisenhaus building is its only remained structure, now the headquarters of Stadtpolizei Zürich. 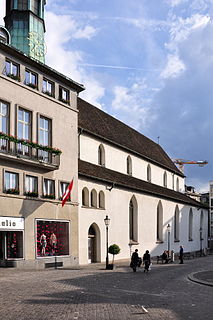 Augustinerkloster was one of the eight monasteries within the medieval city of Zürich in Switzerland. It was founded around 1270 as an Augustinian Order priory on the site of the present Augustinerkirche Zürich on Münzplatz, and was abolished in 1524.

Zunft zum Kämbel is a Zunft (guild) organisation in Zürich, Switzerland. The guild was established in 1336; their guild house, the Haus zur Haue building, is situated at the Limmatquai.

Weinplatz is a popular public square adjacent to the Gmüesbrugg bridge and the historical Schipfe quarter.