Zurab Adeishvili (Georgian :ზურაბ ადეიშვილი) (born July 27, 1972) is a Georgian lawyer and politician, serving as the Minister of Justice of Georgia from November 2008 to October 2012.

Adeishvili was born in the village of Mtisdziri in Qvareli district, then-Soviet Georgia. He graduated from the Faculty of Law, Tbilisi State University in 1994 and continued his training as a jurist at the Institute of State and Law in Tbilisi, Georgia and the University of Groningen in the Netherlands. He served as the leading specialist on constitutional law for the Parliament of Georgia from 1996 and 1999. He then worked in the NGO sector (such as the Georgian Young Lawyers' Association and the Liberty Institute) and briefly practiced law until becoming a Member of Parliament on President Eduard Shevardnadze-led Union of Citizens of Georgia (UCG) party ticket in November 1999.

Adeishvili was a member of an influential and vocal minority group of the UCG faction, dubbed as "reformers", which was led by Zurab Zhvania and Mikheil Saakashvili and called for more radical and Western-oriented political reforms. [1]

At the end of 2001, when the CUG was in the process of collapse, Adeishvili joined Saakashvili's New National Movement and became a member of its parliamentary affiliate, the Faction for Democratic Reforms, which were in opposition to Shevardnadze's government. [1]

After the bloodless "Rose Revolution" in November 2003 toppled down Shevardnadze and swept the "reformers" to power, Adeishvili served successively as Minister of Justice (December 2003 – February 2004), Minister for State Security (February–June 2004), Prosecutor General (June 2004 – January 2008), and Head of Administration of President of Georgia (January–November 2008). As an influential member in the government and a close ally of President Saakashvili, Adeishvili has become a subject of criticism from Georgian opposition, especially during his tenure as Prosecutor General. In the October 2008 cabinet reshuffle, Adeishvili was again put in charge of Ministry of Justice which had recently been merged with the Prosecutor General's Office. In his new capacity, Adeishvili said liberalization of the criminal code would be one of his priorities. [2] After the defeat of Saakashvili's United National Movement in the 2012 parliamentary election, Adeishvili was succeeded, on October 25, 2012, by Tea Tsulukiani, a member of the Georgian Dream coalition. [3] Adeishvili's term at the Ministry of Justice is associated with significant decrease of corruption and improved efficiency of civil and property registration services, which were further transformed into a new concept of Public Service Hall. [4]

Soon after elections, the new Government began to implement its campaign promise to “restore justice” by launching criminal prosecutions against officials of Saakashvili Government. [5] Those prosecutions were largely met critically by international community due to a concern for what appeared to be a selective justice, political retribution and intimidation of opposition. [6] [7] [8] After his meeting with the new Prime Minister Ivanishvili on November 12, 2013, President of European Commission José Manuel Barroso noted, that “situations of selective justice should be avoided as they could harm the country’s image abroad and weaken the rule of law.” [9] In April 2015, General Secretariat of INTERPOL revoked its red notice against Zurab Adeishvili. [10]

While publicly condemning Saakashvili's government and prosecuting its Ministers, the leaders of the new ruling coalition "Georgian Dream" often recognize Adeishvili for his personal ethics and his demonstrated commitment to fighting corruption. [11] [12] Mikheil Saakashvili is a Georgian and Ukrainian politician. He was the third President of Georgia for two consecutive terms from 25 January 2004 to 17 November 2013. From May 2015 until November 2016, Saakashvili was the Governor of Ukraine's Odessa Oblast. He is the founder and former chairman of the United National Movement party. 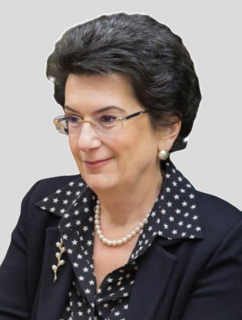 Nino Burjanadze is a Georgian politician and lawyer who served as Chairperson of the Parliament of Georgia from November 2001 to June 2008. As the first woman she has served as the acting head of state of Georgia twice; the first time from 23 November 2003 to 25 January 2004 in the wake of Eduard Shevardnadze's resignation during the Rose Revolution, and again from 25 November 2007 to 20 January 2008, when Mikheil Saakashvili stepped down to rerun in the early presidential elections. She withdrew into opposition to Saakashvili as the leader of the Democratic Movement-United Georgia party in 2008. In October 2013, she ran for president in the October 2013 election. She ran against 22 candidates and ended third with 10 percent of the vote. 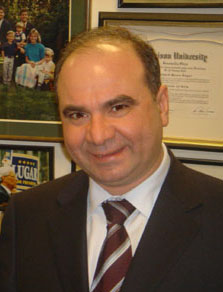 Zurab Zhvania was a Georgian politician, who served as Prime Minister of Georgia and Speaker of the Parliament of Georgia. Zhvania began his political career at young age, making his first political steps as a member of Green Party, in the beginning of 90s. In 1992 Zhvania was elected chairman of Eastern European Green's and was first Eastern European to serve at the post. In 1993 Zhvania made first serious steps in Georgian politics as he was elected as General Secretary of Citizen's Union. From that point Zhvania served important role in Georgian politics until his death in 2005. 1995 he became the chairman of parliament and maintained the post until his resignation in 1999, which was followed with discharge of other ministers, whom Zhvania suspected in Corruption. From 1993 till 2003 Zhvania remained in opposition fighting against Shevardandze's government. In 2003, Zhvania united with other opposition leaders, mainly Burdjanadze and Saakashvili, held non-violent protests against the government. Protests ended with resignation of Shevardnadze and election of Saakashvili as the president. Zhvania became prime minister and served the post until his death in 2005.

A presidential election was held in the Republic of Georgia on January 4, 2004. The election followed the resignation of former President Eduard Shevardnadze. As expected, the main opposition leader, Mikhail Saakashvili, was soon shown by exit polls to be heading for an overwhelming victory. According to preliminary results issued on January 6 by Georgia's Central Election Commission, Saakashvili won over 97% of the votes cast.

United National Movement is a political party in Georgia.

Zurab Tchiaberashvili is a Georgian politician and diplomat. He currently is a leading figure in the opposition European Georgia, after most recently serving as a governor of the Kakheti region. 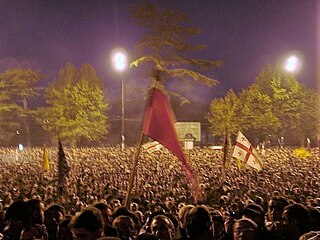 The Revolution of Roses, often translated into English as the Rose Revolution, was a pro-Western peaceful change of power in Georgia in November 2003. The revolution was brought about by widespread protests over the disputed parliamentary elections and culminated in the ousting of President Eduard Shevardnadze, which marked the end of the Soviet era of leadership in the country. The event derives its name from the climactic moment, when demonstrators led by Mikheil Saakashvili stormed the Parliament session with red roses in hand. 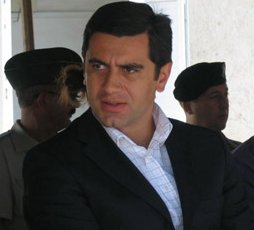 Irakli Okruashvili is a Georgian politician who had served on various important posts in the Government of Georgia under President Mikheil Saakashvili, including being the Minister of Defense from December 2004 until being dismissed in November 2006. 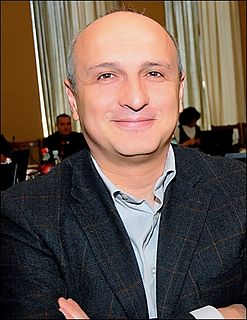 Ivane "Vano" Merabishvili is a Georgian politician and former Prime Minister of Georgia from 4 July to 25 October 2012. A former NGO activist, he became directly involved in Georgia's politics in 1999 and emerged as one of the government's most influential members after the 2003 Rose Revolution, especially as Georgia's Minister of Internal Affairs.

Zurab Nogaideli is a Georgian businessman and a politician who served as the Prime Minister of Georgia from February 2005 until he resigned, citing health problems, on 16 November 2007. In December 2008, Nogaideli withdrew into opposition, setting up the Movement for a Fair Georgia party. 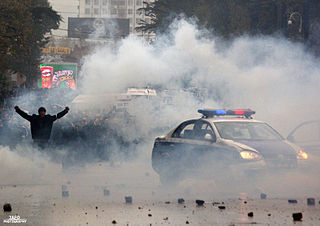 In 2007, a series of anti-government protests took place across Georgia. The demonstrations peaked on 2 November 2007, when 50,000–100,000 rallied in downtown Tbilisi, the capital of Georgia. People protested against the allegedly corrupt government of president Mikheil Saakashvili. Protests triggered by detention of Georgian politician Irakli Okruashvili on charges of extortion, money laundering, and abuse of office during his tenure as defense minister of the country were organized by the National Council, an ad-hoc coalition of ten opposition parties, and financed by the media tycoon Badri Patarkatsishvili. Demonstrations occurred both in September and November 2007 and were initially largely peaceful. The protests went downhill by 6 November 2007, but turned violent the next day when the police, using heavy-handed tactics, including tear gas and water cannon, unblocked Rustaveli Avenue, Tbilisi's main boulevard, dislodged the protesters from the territory adjoining to the House of Parliament, and prevented the demonstrators from resuming the protests. The government accused the Russian secret services of being involved in an attempted coup d'état and declared a nationwide state of emergency later that day which lasted until late 16 November 2007.

In 2009, a mass rally by a coalition of opposition parties in took place in Georgia against the government of President Mikheil Saakashvili. Thousands of people demonstrated, mainly in the capital, Tbilisi, starting on 9 April 2009, demanding Saakashvili's resignation. On the first day of demonstrations, up to 60,000 people gathered in Tbilisi. Opposition activists had expected some 100,000 – 150,000 participants. Protests continued for over three months, although fewer people participated as time passed than during the first days. On 26 May 2009, the Georgian Independence Day, 50,000 protesters took part. Although peaceful at first, there were incidents of fighting between the Georgian police and protesters. The daily rallies gradually dwindled and ended, without achieving any tangible results, on 24 July –107 days after they kicked off.

Kakha Kukava is a Georgian politician, former member of Parliament of Georgia and a leader of Free Georgia.

Vakhtang "Loti" Kobalia is a retired Georgian colonel involved in the civil war of the early 1990s in which he commanded forces loyal to the ousted President Zviad Gamsakhurdia.

The Ministry of Justice of Georgia is a governmental agency within the Cabinet of Georgia in charge of regulating activities in the justice system, overseeing the public prosecutor, maintaining the legal system and public order, protection of the public and instituting law reforms in Georgia. The ministry is headed by Tea Tsulukiani. 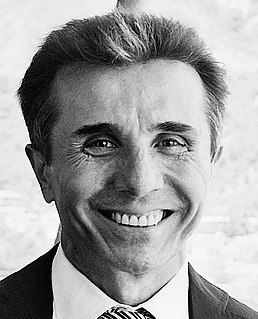 In 2013, Georgia finalized its first-ever peaceful change of power and transition to a parliamentary republic. The Georgian Dream-dominated government, which came to power after defeating, in October 2012, the United National Movement led by the outgoing President Mikheil Saakashvili, promised more democratic reforms. The Georgian Dream candidate Giorgi Margvelashvili won the presidential election in October 2013 and the new constitution significantly reducing the authority of the president in favor of those of the prime minister and government came into effect. In November, the leader of the Georgian Dream, Prime Minister Bidzina Ivanishvili announced his withdrawal from politics as promised earlier, and the Parliament of Georgia approved his nominee, Irakli Garibashvili, as the country's new head of government.

The following lists events that happened during 2015 in Georgia.