Zuver may refer to: 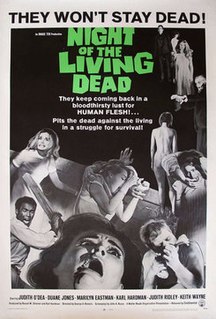 Night of the Living Dead is a 1968 American independent horror film written, directed, photographed and edited by George A. Romero, co-written by John Russo, and starring Duane Jones and Judith O'Dea. The story follows seven people who are trapped in a rural farmhouse in western Pennsylvania, which is under assault by an enlargening group of cannibalistic, undead corpses.

Warren Gard was an attorney, prosecutor, jurist and member of the United States House of Representatives from Ohio.

The 1975 Michigan Wolverines football team was an American football team that represented the University of Michigan in the 1975 Big Ten Conference football season. The team's head coach was Bo Schembechler. The Wolverines played their home games at Michigan Stadium.

The 1976 Michigan Wolverines football team represented the University of Michigan in the 1976 Big Ten Conference football season. In their eighth year under head coach Bo Schembechler, the Wolverines finished the season with a 10–2 record, won the Big Ten Conference championship, and played in the 1977 Rose Bowl. The Wolverines outscored their opponents 432 to 95 and ranked first in the country in total offense, scoring offense, and scoring defense. In the final AP and UPI Polls, Michigan was ranked #3.

Merle Zuver is a former guard in the National Football League. He played with the Green Bay Packers during the 1930 NFL season.

Zuver is an unincorporated community in Placer County, California. Zuver is located 3 miles (4.8 km) west-northwest of Devil Peak. It lies at an elevation of 3921 feet.

The South Bend News-Times was a daily newspaper in South Bend, Indiana, in the United States, from 1913 to 1938.