Zvezdan Terzić (Serbian Cyrillic: Звездан Терзић; born May 21, 1966) is a Serbian football administrator and former player. He currently serves as the general director for Red Star Belgrade of the Serbian SuperLiga.

Immediately after ending his playing career in 1997, he became involved with OFK Beograd in administrative role as the club's director. In January 2005 he received his doctorate from National University of Management, Cambodia and soon after he became the president of Serbian Football Association (FSS), [1] an organization that has in July 2006, after Montenegrin secession, become the country's top football governing body. He resigned the post in March 2008 amid controversy.

After being on the run from law since March 2008 following an arrest warrant issued for him in Serbia where he's charged for embezzlement and fraud in regards to transfers of OFK Beograd players, Terzić turned himself in to Serbian authorities on November 11, 2010. He was widely believed to be hiding in Montenegro where he has many personal ties and connections.

Although being of Montenegrin origin, he was born in Titov Vrbas, SR Serbia, SFR Yugoslavia.

Terzić played for AIK Bačka Topola and OFK Beograd (1989–1996) before transferring to Kastoria during the 1996–97 Greek Alpha Ethniki season where he finished out his playing career. [2]

Simultaneously with playing Terzić also pursued his education, earning a degree in economics from the University of Belgrade in 1995. Later, he got a master's degree from Braća Karić University. After retiring from playing football, Terzić joined his old club OFK Beograd in the role of general director. The club was in rough shape, financially strapped and competing in the second-tier level. However, not long after he joined, the club bounced back up to the top league and started producing young talent that was sold directly to foreign teams, thus bypassing the usual route of first joining one of the two big Serbian clubs (Red Star or FK Partizan) before going abroad.

By the mid-2000s, Terzić was an important factor in Serbian football. With his club a stable member of the top league and a slew of young OFK players that got their exposure through under-21 national team sold abroad, Terzić set his sights on the Serbian FA (FSS), which at the time had regional character only, under the umbrella of national Serbia-Montenegro FA (FSSCG).

Ahead of the FSS presidential race, Terzić got endorsed for the job by both Red Star and Partizan representatives. At the elections held on January 22, 2005, Terzić got unanimous delegate support after his only opponent Nebojša Leković dropped out of the race. [3] Not even 39 years of age at the time, Terzić fostered an image of a young, dynamic, modern, and reform-oriented football administrator.

On May 21, 2006, the state union of Serbia and Montenegro dissolved, thus suddenly turning FSS into the nationwide football association. Following the 2006 FIFA World Cup, Terzić assumed his job with newly expanded jurisdictions. As one of his first orders of business, he decided to show the door to national team head coach Ilija Petković and hire Spaniard Javier Clemente who thus became the first foreigner behind the national team's bench. Terzic also, the media pressure led by the journalist Mihajlo Todić, decided to change the colors of the national team from the traditional blue to red and insisted that the new national team jersey contain the state coat-of-arms instead of the FA logo.

In late September 2012, after two and a half years on the run, nine months in prison detention, and a full year out on bail, Terzić, who is awaiting trial, got voted to the position of OFK Beograd president. [4]

On 2 October 2014, Terzić who is acting general secretary was banned for six months for attacking referee Dejan Santrac. [5] On 26 June 2020, Terzić tested positive for COVID-19. [6]

Terzić's position at Serbian FA, as well as his past administrative posts in Serbian football, came under severe public scrutiny in early 2008 after B92 television's Insajder programme aired a six-part investigative series on corruption in Serbian football. Among the variety of individuals and events mentioned, Terzić was accused of fixing matches while at the helm of OFK Beograd during the early 2000s, often with his close friend Brano Mićunović, Montenegrin gangster and at the time FK Sutjeska Nikšić president. Terzić was also accused of strong-arming talented, young, and up-and-coming Serbian players from various domestic clubs into joining OFK Beograd by supposedly using his position at Serbian FA in order to block their access to the Serbia national under-21 football team unless they signed with OFK Beograd. Once they've joined OFK, he would make sure they get enough exposure through the u-21 team and sell them for sizable amounts to richer European clubs.

In late January 2008, at the height of the controversy and public scandal that erupted as a result of the TV program, Terzić left Serbia claiming he was in the United States to attend a "professional development course" at Northcentral University in Prescott Valley, Arizona, promising to be back in Serbia by February 27. [7] After not returning by the said date, he gave a phone interview in early March 2008 to the Večernje novosti daily newspaper now saying he'll first stop off in London to take care of a "skiing injury he picked up in early February" while once again reiterating that he'll be back in Serbia. [8]

Once again, he never showed up, and his whereabouts from this point until November 2010 are unknown, although he is widely believed to have spent that entire time in Montenegro where he has many personal ties and connections.

Terzić on the run: Arrest warrant and court case in absentia

On 4 March 2008 Serbian police issued an arrest warrant for Terzić on embezzlement charges. Police accused him of illegally receiving about $840,000 when he was the director of OFK Belgrade by selling Vanja Grubač to Hamburger SV in 1998. [9]

Terzić resigned his post as the Serbian FA president from an unknown location on 12 March 2008. [10]

On 14 April 2008, the District Persecutor's Office in Belgrade opened an investigation into the case against Terzić as it relates to the Grubač transfer. On 10 July 2008, the Serbian arrest warrant got Interpol-wide character.

On 18 December 2008, the Serbian police investigation against Terzić got expanded to look into charges brought in by the Serbian state persecutor's office that Terzić (along with Vladimir Bulatović and Dražen Podunavac) also illegally profited on transfer of Branislav Ivanović from OFK to Lokomotiv Moskva and Stevan Stošić from OFK to Málaga CF in 2006. [11]

On December 20, fugitive Terzić's letter got published in the Sportski žurnal daily sports paper. In it he defends his position by claiming he did things in line with what everyone else was doing at the time. [12] [13]

February 2009 arrest and release in Montenegro

On Saturday, 21 February 2009, Montenegrin police arrested a man believed to be Zvezdan Terzić at the friendly match between FK Mogren and OFK Beograd at the Jaz Beach sports complex in Budva. Shortly, Montenegrin police issued a press release saying that their action was a case of mistaken identity and that the man arrested was not Zvezdan Terzić. [14] The police did not, however, release the full identity of their "wrongfully arrested man", only his initials V.J. and his town of residence − Nikšić. On the other hand, many witnesses who saw the arrest during the match confirmed to various press outlets that the arrested man was in fact Terzić and that the Montenegrin police simply let him go shortly after taking him in. [15]

The entire fiasco led to speculation that Terzić enjoys protection from highest echelons of Montenegrin regime. [16]

On 5 April 2009, Terzić's lawyer Vladan Batić (also a politician and former Serbian Minister of Justice in the government of Zoran Đinđić) held a press conference during which he called on the Serbian persecutor's office to stop proceedings against his client due to "there not being any evidence that he made any illegal financial gains". He also called the case against his client "political", referring to the 6 December 2007 article in Politika daily as having been "planted by the paper's political mentors at the time". He also made several veiled references to the former Serbian Prime Minister Vojislav Koštunica and former Minister of the Interior Dragan Jočić being behind the "media witch hunt against Terzić". [17] [18]

In anticipation of the indictment against his client being unveiled, during June 2009, Batić offered to put up Terzić's house in Bačka Topola as a collateral his client would not run from law in return for being able to face the charges as a free man. [19] The authorities did not respond to the offer.

Indictment unveiled and Terzić turns himself in

After more than two years of information gathering, on 7 July 2010, the Higher Public Persecutor's Office in Belgrade submitted an indictment against Terzić and three other individuals (OFK Beograd officials Milovan Ikodinović and Vladimir Bulatović as well as player-agent Dražen Podunavac) over the misappropriation of funds during transfers of Vanja Grubač, Stefan Stošić, Branislav Ivanović, and Srđan Stanić. [20] [21] [22]

On 12 November 2010, Terzić turned himself in to the Serbian authorities. [23] He got placed in detention at Belgrade's Central Prison. In June 2011 he was released from detention after posting a €1 million bail. [24] 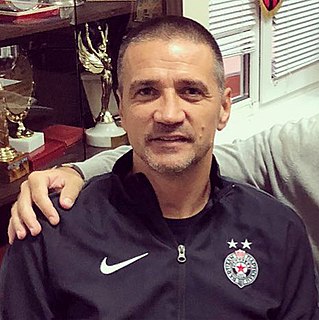 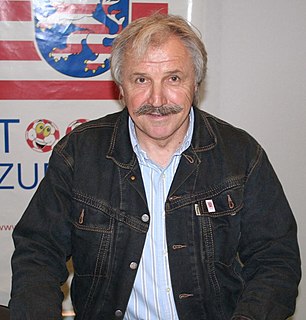 Ratko Dostanić is a Serbian former professional footballer who played as a defender and current manager of Zeta.

Aleksandar Kolarov is a Serbian professional footballer who plays for Serie A club Inter Milan. Although primarily a left-back, Kolarov can also operate as a centre-back and anywhere along the left flank and is known for his overlapping attacking runs on the wing, his powerful ball-striking ability with his left foot, and his accuracy from free kicks. He was named Serbian Player of the Year in 2011.

Vanja Grubač is a Montenegrin former professional footballer who played as a striker.

Nemanja Nikolić is a Montenegrin professional footballer who plays as a midfielder.

Rodoljub "Rođa" Marjanović is a Serbian professional footballer who plays as a forward. He also holds Croatian citizenship. 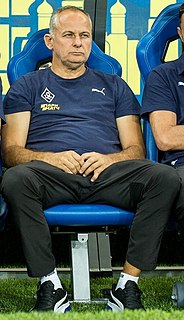 Saša Petrović is a Montenegrin football manager and former goalkeeper.

Tomislav "Tole" Karadžić is a Montenegrin Serb businessman and football administrator. From 2008 to 2016, he served in his second stint as the president of the Football Association of Serbia (FSS).

Nemanja Milić is a Serbian professional footballer who plays as a winger for BATE Borisov.

Uroš Račić is a Serbian professional footballer who plays as a central midfielder for Spanish club Valencia CF.