Arad held a variety of senior academic posts at Bar-Ilan University. He served as chairman of the Mathematics and Computer Science Department, Dean of the Faculty of Natural Sciences and Mathematics, Rector and President of the University (succeeding Ernest Krausz, and followed by Shlomo Eckstein). [3] Together with Professor Bernard Pinchuk he founded Gelbart Institute, an international research institute named after Abe Gelbart, and the Emmy Noether Institute (Minerva Center). Together with colleagues he established a journal, the Israel Mathematics Conference Proceedings, distributed by the American Mathematical Society (AMS). From 1984–1985 he served as a member of the Council for Higher Education of the State of Israel. In 1982 he was elected a member of Russia's Academy of Natural Sciences.

From 1994 he served on the editorial board of the Algebra Colloquium, a journal of the Chinese Academy of Sciences published by Springer-Verlag. He also serves on the editorial board of various international publications: South East Asian Bulletin of Mathematics of the Asian Mathematical Society, the IMCP of Contemporary Mathematics published by the American Mathematical Society, and the publication Cubo Matemática Educacional, Temuco, Chile.

He initiated numerous agreements of cooperation with universities and institutions throughout the world including academic institutes in the former Soviet Union, universities and research centers in America, Canada, Germany, the United Kingdom, Italy, Russia, China, South Africa, etc.

He was a member of Israel's first official delegation to the former USSR, under the leadership of President Ezer Weizman. In an official address, President Mikhail Gorbachev mentioned Professor Arad's contributions towards the establishment of scientific communications between Israel and the former USSR. In an effort to advance cooperation in research he has headed delegations of scientists to Russia, China, and East Germany.

Haaretz newspaper (January 21, 1998) described him as one of the pioneers of higher education reform in Israel. The Encyclopaedia Hebraica lists Zvi Arad as "fulfilling a key role in the development and advancement of Bar-Ilan University and in the establishment of the University's regional colleges in Safed, Ashkelon and the Jordan Valley)." For this achievement he was awarded a certificate of honor by the mayor of each city. The establishment of these colleges began in 1985 and went on to affect the whole of Israel. These colleges advanced the Galilee and Southern Israel and brought higher education to the peripheries of Israel.

In 1994, at the request of the mayors of the city of Netanya, Yoel Elroi and Zvi Poleg, Arad established the Netanya Academic College. He served as president of the college for 24 years. [4] A partner in the initiation and establishment of the college was Miriam Feirberg, who at that time served as head of the Education Department of the City of Netanya. Today the college is an accredited institute of higher education that grant first and second academic degrees in a variety of fields.

Together with his colleague Professor Marcel Herzog, Arad wrote Products of Conjugacy Classes, published by Springer-Verlag. The book facilitated the basis of the establishment of mathematical theory and today forms part of the branch of abstract algebra known as Table Algebras, and is attached to central branches in mathematics: Graph theory, algebra combinations, and theory presentation. Arad coauthored two other books on the subject of table algebra. In 2000 his book was published in the series American Mathematical Society Memoirs and in January 2002 another book on table algebras was published in the international publication, Springer. Arad was the editor of Contemporary Mathematics, Volume 402.

Tel Aviv University (TAU) is a public research university in Tel Aviv, Israel. With over 30,000 students, it is the largest university in the country. Located in northwest Tel Aviv, the university is the center of teaching and research of the city, comprising 9 faculties, 17 teaching hospitals, 18 performing arts centers, 27 schools, 106 departments, 340 research centers, and 400 laboratories. 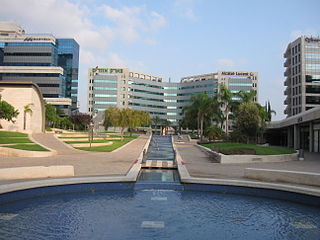 Petah Tikva, also known as Em HaMoshavot, is a city in the Central District of Israel, 10.6 km (6.6 mi) east of Tel Aviv. It was founded in 1878, mainly by Orthodox Jews of the Old Yishuv, and became a permanent settlement in 1883 with the financial help of Baron Edmond de Rothschild.

Gush Dan is a conurbation in Israel, located along the country's Mediterranean coastline. There is no single formal definition of Gush Dan, though the term is in frequent use by governmenting bodies. It ranges from combining Tel Aviv with cities that form urban continuum with it, to the entire areas from both the Tel Aviv and the Central District, or sometimes the whole Metropolitan Area of Tel Aviv, which includes a small part of the Southern District as well. Gush Dan is the largest conurbation and metropolitan area in Israel, with the metropolitan area having an estimated population of 4,054,570 residents, 95% of whom are Israeli Jews. Despite making up less than 8% of Israel's total land area, it houses about 45% of the country's total population. It is the second or third largest metropolitan area on the Mediterranean Sea.

Bar-Ilan University is a public research university in the city of Ramat Gan in the Tel Aviv District, Israel. Established in 1955, Bar Ilan is Israel's second-largest academic institution. It has 18,000 students and 1,350 faculty members.

Netanya Academic College is a private college based in Netanya, Israel. Established in 1994 by a team from Bar-Ilan University, it has an enrolment of around 4,000 undergraduate students. It was founded by Zvi Arad, who served as its president for 24 years.

Daniel Hershkowitz is an Israeli politician, mathematician, and Orthodox rabbi. He currently serves as Israel's Head of the Civil Service Commission. Previously he served as a professor of mathematics at the Technion, and is also rabbi of the Ahuza neighborhood in Haifa. He was president of Bar-Ilan University from 2013 to 2017.

Zvi is a Jewish masculine given name. Notable people with this name include:

Shlomo Morag, also spelled Shelomo Morag, was an Israeli professor at the department of Hebrew Language at the Hebrew University of Jerusalem. Morag founded the Jewish Oral Traditions Research Center at the Hebrew University and served as the head of Ben Zvi Institute for the study of Jewish communities in the East for several years. He was a member of the Academy of the Hebrew Language and the Israel Academy of Sciences and Humanities, and a fellow of the American Academy of Jewish Research.

Noah Dana-Picard is an Israeli mathematician, professor and Talmudic scholar who has been the president of the Jerusalem College of Technology (JCT) since 2009.

Arad (אָרַד) is a surname from the Hebrew word for bronze. Notable people with the surname include:

Abraham Markham Gelbart was an American mathematician, the founding dean of the Belfer Graduate School of Science at Yeshiva University and the namesake of the International Research Institute for Mathematical Sciences at Bar-Ilan University in Ramat Gan, Israel. 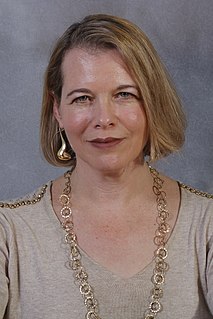 Ruth Halperin-Kaddari is an Israeli legal scholar and international women's rights advocate who is known for her work on family law, feminist legal theory, women's rights in international law, and women and religion. She was a member of the United Nations Committee on the Elimination of Discrimination against Women from 2006 to 2018, and was the committee's vice chair during several terms. She is Professor of Law at the Bar-Ilan University and is the founding Director of the Ruth and Emanuel Rackman Center for the Advancement of the Status of Women. She is also involved in international academic collaborations on the theme of women, state, and religion, and participates in international litigations as an expert on Israeli family law. 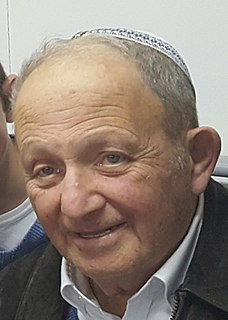 Harold Basch was a Professor of Chemistry who specialized in Computational Chemistry.

Oved Ben-Ami was an Israeli politician and businessman. He was one of the founders of the cities of Netanya and Ashdod and was a longtime mayor of Netanya. He was also among the key founders of the Israeli diamond industry and the Maariv newspaper.

Ernest (Kopul) Krausz was an Israeli Professor of Sociology, Rector, and then Acting President at Bar Ilan University, and taught as well as a Professor at the Netanya Academic College.

Shlomo Raber Eckstein was an Israeli economist, and President of Bar-Ilan University. 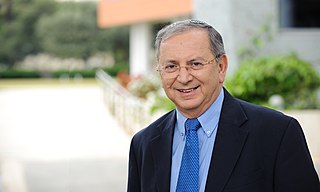 Moshe Kaveh is an Israeli physicist and former President of Bar-Ilan University.