Zvi Hendel (Hebrew : צבי הנדל‎, born 16 October 1949) is an Israeli politician who served as a member of the Knesset for the Tkuma faction of the National Union between 1996 and 2009.

Born in Transylvania in Romania, Hendel made aliyah in 1959 and in his military service he served as a Gadna instructor. In his reserve duty he served as part of a reconnaissance unit in the Israeli Artillery Corps and took part in the Yom Kippur War.

In 1977, he moved with his family to the Israeli settlement of Ganei Tal, part of the Gush Katif bloc in the Gaza Strip.

In the early 1990s, Hendel was elected to the head of the Hof Aza Regional Council, and was first elected to the 14th Knesset in 1996 as a National Religious Party representative. Towards the end of his term, he left the party along with Hanan Porat and formed the "Emunim" faction, which soon after changed its name to Tkuma. As part the Tkuma party, he joined the National Union list, and was elected to the fifteenth, sixteenth, and seventeenth Knessets.

In the 15th Knesset, he served as chairman of the Aliyah, Absorption, and Diaspora committee.

During Ariel Sharon's second term as Prime Minister of Israel, Hendel served as Deputy Minister of Education, Culture, and Sports until the National Union party was dismissed from the coalition on 6 June 2004 prior to a vote on the disengagement plan.

A significant part of his parliamentary career was devoted to efforts for the residents of Gush Katif (where he himself resided), and strengthening the right wing in the Knesset. In this context, he also coined the phrase "כעומק החקירה, כך עומק העקירה" ("As deep the investigation is, so is the uprooting"), commenting on the legal investigations ongoing against Sharon at the same time Sharon changed his political views and decided on the Disengagement Plan.

Hendel also served as head of the Agricultural caucus in the Knesset.

In 2005, Hendel was evicted from his home along with fellow residents of Ganei Tal as part of the Disengagement Plan. Him and his family's dealing with the eviction was the subject of the documentaries "Katif", and "Last Katif".

In 2006, Hendel submitted a bill proposal that would tie an oath of loyalty to "a Jewish and democratic Israel" and to the laws of Israel, to the right to vote. The Bill was turned down by a vote of 45-17. [1]

After Knesset, he became the head of the Israel Anti-Drug Authority. In this role, he vigorously opposed cannabis legalization and was criticized for a dispute with Knesset member Tamar Zandberg. [2]

Likud, officially the Likud – National Liberal Movement, is the major center-right to right-wing political party in Israel. A secular party, it was founded in 1973 by Menachem Begin and Ariel Sharon in an alliance with several right-wing parties. Likud's landslide victory in the 1977 elections was a major turning point in the country's political history, marking the first time the left had lost power. In addition, it was the first time in Israel that a right-wing party won the plurality of the votes. However, after ruling the country for most of the 1980s, the party lost the Knesset election in 1992. Nevertheless, Likud's candidate Benjamin Netanyahu did win the vote for Prime Minister in 1996 and was given the task of forming a government after the 1996 elections. Netanyahu's government fell apart after a vote of no confidence, which led to elections being called in 1999 and Likud losing power to the One Israel coalition led by Ehud Barak.

The National Union was an alliance of right-wing and nationalist political parties in Israel. In its final full form, the alliance consisted of four parties: Moledet, Hatikva, Eretz Yisrael Shelanu, and Tkuma. Leading up to the 2013 Knesset elections, only Tkuma remained, and joined The Jewish Home. During its existence, it had also included Ahi, Herut – The National Movement, the Jewish National Front, and Yisrael Beiteinu.

The National Religious Party was a political party in Israel representing the religious Zionist movement. Formed in 1956, at the time of its dissolution in 2008, it was the second-oldest surviving party in the country after Agudat Yisrael, and was part of every government coalition until 1992. Traditionally a practical centrist party, in its later years, it drifted to the right, becoming increasingly associated with Israeli settlers, and towards the end of its existence, it was part of a political alliance with the strongly right-wing National Union. The 2006 elections saw the party slump to just three seats, the worst electoral performance in its history. In November 2008, party members voted to disband the party in order to join the new Jewish Home party created by a merger of the NRP and most of the National Union factions. However, most of the National Union left the merger shortly after its implementation. 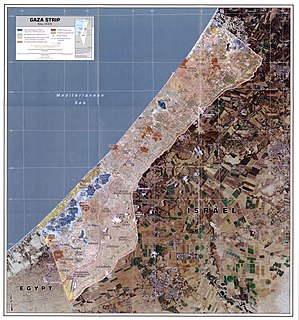 The Israeli disengagement from Gaza was the unilateral dismantling in 2005 of the 21 Israeli settlements in the Gaza Strip and the evacuation of the settlers and Israeli army from inside the Gaza Strip. 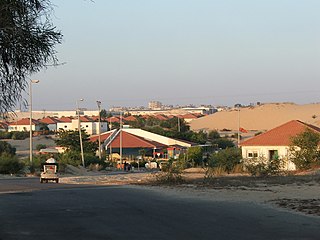 Gush Katif was a bloc of 17 Israeli settlements in the southern Gaza strip. In August 2005, the Israeli army carried out the Cabinet's decision and forcibly removed the 8,600 residents of Gush Katif from their homes. Their communities were demolished as part of Israel's unilateral disengagement from the Gaza Strip. 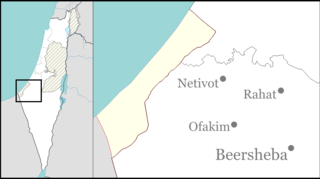 Ganei Tal was an Israeli settlement in the south of the Gaza Strip, located in the Gush Katif settlement bloc. It was under the jurisdiction of Hof Aza Regional Council.

Elections for the 16th Knesset were held in Israel on 28 January 2003. The result was a resounding victory for Ariel Sharon's Likud.

Tel Katifa, was a small Israeli settlement located in the northeast end of the Gush Katif settlement bloc of the Gaza Strip, and evacuated in Israel's disengagement of 2005.

Michael Nudelman was an Israeli politician who served as a member of the Knesset for Yisrael BaAliyah, Aliyah, the National Union, Yisrael Beiteinu and Kadima between 1996 and 2009. 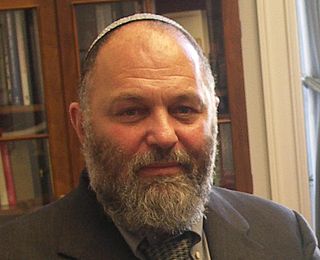 Efraim "Effi" (Fine) Eitam is an Israeli Brigadier General, former commander of the 91st Division, and a politician. A former leader of the National Religious Party, he later led a breakaway faction, Ahi, which merged into Likud in 2009. He served as a member of the Knesset between 2003 and 2009.

Rabbi Menachem Froman was an Israeli Orthodox rabbi, and a peacemaker and negotiator with close ties to Palestinian religious leaders. A founding member of Gush Emunim, he served as the chief rabbi of Tekoa in the West Bank. He was well known for promoting and leading interfaith dialogue between Jews and Arabs, focusing on using religion as a tool and source for recognizing the humanity and dignity of all people. Together with a Palestinian journalist close to Hamas, Rabbi Froman drafted a ceasefire agreement between Israel and the Hamas government in the Gaza Strip, known as the Froman-Amayreh Agreement. The agreement was endorsed by Hamas government, but it did not receive any official response from the Israeli government. 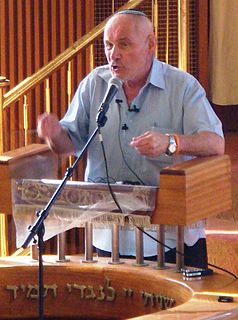 Hanan Porat was an Israeli Orthodox rabbi, educator, and politician who served as a member of the Knesset for Tehiya, the National Religious Party, Tkuma, and the National Union between 1981 and 1984, and between 1988 and 1999.

The thirtieth government of Israel was formed by Ariel Sharon on 28 February 2003, following Likud's comprehensive victory in the January elections. His coalition initially included Shinui and the National Union, holding 60 of the 120 seats in the Knesset, whilst the two-seat Yisrael BaAliyah merged into Likud shortly after. The National Religious Party also joined the coalition on 3 March 2003, taking the number of seats it held up to 66.

Rafael "Rafi" Peretz is an Israeli Orthodox rabbi and politician. A former military officer and helicopter pilot who also served as the Chief Military Rabbi of the Israel Defense Forces, he was the leader of the Jewish Home party. Peretz was a member of the Knesset for the Yamina alliance until he separated from the faction in order to join the Netanyahu-led government.

Gush Katif Airport was a small airfield in the Gaza Strip approximately 2 miles (3.2 km) north of the town of Khan Yunis, and adjacent to the UNRWA Khan Younis refugee camp. It was immediately west of the former Israeli settlement of Ganei Tal, and named after the former Israeli settlement area of Gush Katif. Following the destruction of the Yasser Arafat International Airport it was briefly the only usable runway in the Gaza Strip, but in 2004 it was abandoned, and was overbuilt by 2015. 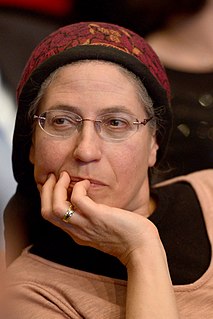 Orit Malka Strook is an Israeli politician. She served as a member of the Knesset for Tkuma between 2013 and 2015. Strook is also among the leaders of the Jewish settlement in Hebron, and she established the Israeli non-governmental organization Human Rights Organization of Judea and Samaria, which she headed between 2004 and 2012.

The Legal Forum for the Land of Israel is a professional legal non-governmental organization incorporating hundreds of lawyers and jurists, aiming to preserve Israel's democratic and Zionist identity, to ensure sound governance, and to balance between the legislative, executive and judicial powers of government in order to protect human rights and promote national interests through legal, parliamentary and public actions.

Yamina or Yemina is an Israeli political alliance of right-wing parties that was originally configured as the New Right and the Union of Right-Wing Parties. The current incarnation of the alliance includes the New Right while The Jewish Home left the alliance on 14 July 2020 and the Religious Zionist Party left on 20 January 2021.