In 1991, the band released a live compilation album consisting of selected live recordings made from 1988 until 1991 entitled Retrospektiva '88-'91 (A Retrospective '88-91), after which the band lineup had changed and on the departure of the remaining members, Todorović, with KBO! members Saša Vujić "Vuja" (guitar) and Slobodan Vujić "Boban" (drums), continued working, but moving towards a more melodic punk rock sound.

The new lineup started recording new material at the Kragujevac Češnjak studio, owned by the Vujić brothers. [1] The recordings resulted in the release of the second demo album Inženjeri ljudskih duša (Human Soul Engineers), which got the name by a Stalin's definition for artists, which beside their own material also featured cover versions of the Devo song "Mongoloid" and the Termiti song "Vjeran pas" ("Faithful Dog").

Two years later, in 1994, the band released their first studio album, Mrzim svoju mesnu zajednicu (I Hate My Municipality), released by Take It Or Leave It Records on both MC and 300 copy limited edition LP, featuring a cover version of the Paraf single "Moj život je novi val" ("My Life is New Wave"). The album, recorded at the Češnak studio from December 1993 until March 1994 and produced by Saša Vujić, also featured the original band members Dragan Vesković "Vesko" (harp, oboe) and Dejan Novaković "Fumarone" (bass). [2] In order to promote the album, the band recorded their first promotional video, for the track "A slanina, slanina forever" ("But Bacon, Bacon Forever").

In 1996, the band performed at the Belgrade KST at a concert organized by the TV Politika show Paket Aranžman (Package Deal), featuring prominent Serbian bands performed cover versions of punk songs, and the live versions of "Moj život je novi val", "Mongoloid" and "Vjeran pas", recorded at the event, were released on the live various artists compilation Punk You All by Hi-Fi Centar. At the fifth anniversary celebration of the Paket Aranžman TV show, the band appeared as one of the performers and the live versions of the songs "Balkanski varvari" ("Barbarians from The Balkans") and "Aluvijalne ravni" ("Alluvial Plains") appeared on the live various artists compilation Svi protiv svih (Everybody Against Everyone), released in 1998 by Hi-Fi Centar. [3]

During the same year, the band founded their own independent record label Neprijatelj Prelazi Rijeku Records (The Enemy Is Crossing the River Records) under which they released their second studio album Gavrilov princip (Gavrilo's Principle, a pun for Gavrilo Princip's name), produced by Saša Vujić, which, beside the three, also featured the bassist Nenad Jakovljević "Jakob". Not minding the witty titles, the material, including "Toširo Mifune A Kolo", "Koka Kolo", "Ska kolo" and "Dilerovo kolo", dealt with serious social topics.

In 2002, Todorović and Saša Vujić had cameo appearances in the Ðorde Milosavljević movie Ringeraja , performing a cover version of the Indexi hit "Bacila je sve niz rijeku" ("She Had Thrown Away Everything Down The River").

In the autumn of 2014, the band participated in a tribute album to Novembar, entitled Tako mlad i tako čist (So Young and So Clean), with a cover of Novembar song "Buntovnik" ("Rebell"). [6]

Atheist Rap is a Serbian punk rock band from Novi Sad, formed in 1989, which has released six studio albums, one compilation album and one live DVD. Their music is often characterized as "fun punk" due to its cheerful music and vocals. Their lyrics are usually critical of society and politics and are often humorous accounts of everyday events. 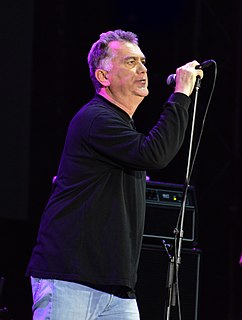 Paket aranžman is a new wave music compilation album released in 1981 by Jugoton. Featuring eminent Belgrade acts Šarlo Akrobata, Električni Orgazam and Idoli, it is considered to be one of the most important and influential records ever made in SFR Yugoslavia. In addition to critical praise, it reached a cult status among the audiences and continues to be popular across the countries that emerged after the breakup of Yugoslavia.

Šarlo Akrobata were a seminal Serbian new wave/post-punk band from Belgrade. Short-lived but extremely influential, in addition to being one of the most important acts of the Yugoslav new wave scene, the three piece left an indelible mark on the entire music scene of former Yugoslavia.

Novi Punk Val is a compilation album of punk rock and new wave music from the SFR Yugoslavia. It covers the period from 1978 till 1980. It was released by ZKP RTLJ in 1981. It includes songs by notable Slovenian and Croatian artists from the former Yugoslav punk rock and new wave scenes including: Pankrti, Paraf, Prljavo kazalište, Termiti and others.

KBO! is a Serbian punk rock band from Kragujevac, Serbia. They are one of the first hardcore punk acts on the former Yugoslav punk scene. Since the very beginning, the band accepted the DIY ethic by forming their own record label KBO! Records, through which they have released all their official releases. The band have toured across several European countries including Hungary, Austria, Greece, Belgium and Netherlands and shared the stage with acts such as Gorilla Biscuits, Babes in Toyland. They released several studio and live albums, some of them for foreign record labels and were included in numerous international punk compilations featuring eminent bands.

Artistička radna akcija is a new wave and punk rock compilation album released in 1981 by Jugoton in SFR Yugoslavia. It presents a snapshot of the early 1980s Belgrade underground music scene through bands Radnička Kontrola, Bezobrazno Zeleno, Profili Profili, Defektno Efektni, Urbana Gerila, Petar i Zli Vuci, U Škripcu, Pasta ZZ, VIA Talas and TV Moroni, all of whom took part in the compilation as means of showcasing their material to a wider audience.

Električni Orgazam is a Serbian rock band from Belgrade. Originally starting as a combination of new wave, punk rock and post-punk, the band later slowly changed their style, becoming a mainstream rock act. They were one of the most notable acts of the former Yugoslav rock scene. 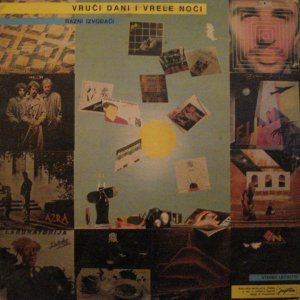 Vrući dani i vrele noći was a compilation album released by Jugoton in 1982 in the former SFR Yugoslavia. 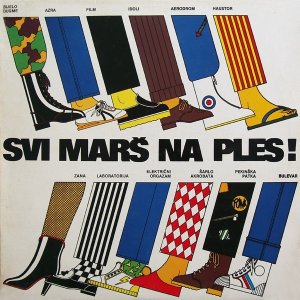 Svi marš na ples! is a compilation album released by Jugoton in 1980 in SFR Yugoslavia.

Goblini are a Serbian punk rock band from Šabac.

Direktori is a Serbian oi! punk/ska group from Belgrade.

Trula Koalicija are a Serbian punk rock supergroup from Kragujevac. 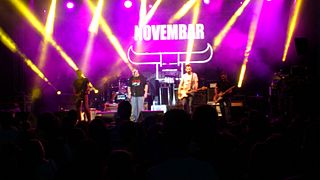 Novembar is a Serbian punk rock band from Niš.

VIS Simboli are a fictional band from the Yugoslavian film Strangler vs. Strangler. 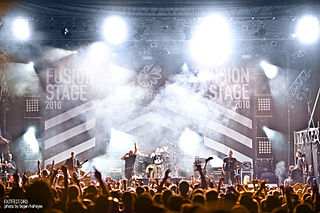 Ritam Nereda is a Serbian and Yugoslav oi!/punk rock band from Novi Sad.

Urgh! is a Serbian grindcore/alternative rock band from Belgrade.