Last updated December 24, 2021
For the given name, see Zygi (given name). For the ancient tribe on the Black Sea, see Zygii.
Place in Larnaca District, Cyprus

Zygi (Greek : Ζύγι; Turkish : Terazi) is a small village on the south coast of Cyprus, between Limassol and Larnaca. Before 1974, Zygi had a mixed Greek- and Turkish-Cypriot population. [1]

The Evangelos Florakis Navy Base explosion of 11 July 2011 damaged every house in the village.

In 2018, the village was the site of protests supported by anti-immigrant party ELAM and members of the local council against the building of a centre for unaccompanied refugee children. [2] [3] Other residents disputed the protest. [4]

This controversy led to some Cypriots calling for a boycott of the village, which is famous for its taverns. Notably, a trip to the village by a nearby school was cancelled, after students refused to go, as they considered that their immigrant classmates wouldn't be welcome. [5]

Cyprus is a member of the United Nations along with most of its agencies as well as the Commonwealth of Nations, World Bank, International Monetary Fund and Council of Europe. In addition, the country has signed the General Agreement on Tariffs and Trade (GATT) and the Multilateral Investment Guarantee Agency Agreement (MIGA). Cyprus has been a member of the European Union since 2004 and in the second half of the 2012 it held the Presidency of the Council of the European Union.

The United Nations Buffer Zone in Cyprus is a demilitarized zone, patrolled by the United Nations Peacekeeping Force in Cyprus (UNFICYP), that was established in 1964 and extended in 1974 after the ceasefire of 16 August 1974, following the Turkish invasion of Cyprus, and the de facto partition of the island into the area controlled by the Republic of Cyprus and the largely unrecognized Turkish Republic of Northern Cyprus in the North. The zone, also known as the Green Line, stretches for 180 kilometres from Paralimni in the east to Kato Pyrgos in the west, where a separate section surrounds Kokkina.

Cypriot refugees are the Cypriot nationals or Cyprus residents who had their main residence in an area forcibly evacuated during the Cyprus conflict. The government of Cyprus also recognizes as refugees the descendants of the original refugees in the male line regardless of place of birth.

Immigration to Turkey is the process by which people migrate to Turkey to reside in the country. Many, but not all, become Turkish citizens. After the dissolution of the Ottoman Empire and following Turkish War of Independence, an exodus by the large portion of Turkish (Turkic) and Muslim peoples from the Balkans, Caucasus, Crimea, and Crete took refuge in present-day Turkey and moulded the country's fundamental features. Trends of immigration towards Turkey continue to this day, although the motives are more varied and are usually in line with the patterns of global immigration movements. Turkey's migrant crisis was a period during 2010s characterized by high numbers of people arriving in Turkey.

New Internationalist Left is a Trotskyist political organization in Cyprus. It was affiliated to International Socialist Alternative until 24 June 2021. It is not represented in parliament or other government bodies. 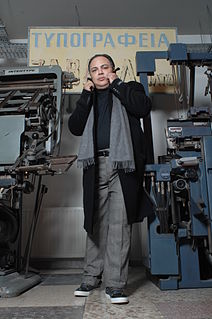 Andreas Paraschos is the former director of Kathimerini, a daily morning newspaper published in Nicosia.

People Against Suffering, Oppression and Poverty (PASSOP) is a community-based, grass roots non-profit organisation fighting for the rights of asylum seekers, refugees and immigrants in Cape Town, South Africa.

Neo Chorio is a village in the Nicosia District of Cyprus, 2 km south of Kythrea. De facto, it is under the control of Northern Cyprus.

Arminou is a village in the Paphos District of Cyprus, located 5 km north of Salamiou on the F617 road from Filousa to Mandria. The village is on the Dhiarizos River which is second in terms of flow river in Cyprus. The Arminou Dam, an earthfill structure, is built in the Diarizos river and was inaugurated in December 1998. According to data provided by the Ministry of Agriculture, Natural Resources and Environment, the dam’s capacity is 4.3 million cubic metres, with a height of 40 metres and a length of 194 metres.

Niyazi Kızılyürek is a Turkish Cypriot political scientist. He is, as of 2016, a professor of political history in the University of Cyprus, specialising on the political history of Turkey and Cyprus, and the Dean of the School of Humanities there.

Tochni massacre refers to the killing of 84 Turkish Cypriots from the village of Tochni, Larnaca, Cyprus by Greek Cypriots members of EOKA B during the Turkish invasion of Cyprus in the Summer of 1974.