Zygmunt Henryk Berling (27 April 1896 – 11 July 1980) was a Polish general and politician. He fought for the independence of Poland in the early 20th century. Berling was a co-founder and commander of the First Polish Army, which fought on the Eastern Front of World War II.

Zygmunt Berling was born in Limanowa, then part of the Austro-Hungarian Empire, on 27 April 1896. [1] He joined the Polish Legions of Józef Piłsudski in 1914, serving in the 2nd and 4th Legions Infantry Regiment (Pułk Piechoty Legionów). Between the "oath crisis" of June 1917 and October 1918 he served in the Austro-Hungarian Army. At the end of the World War I he joined the reborn Polish Army, becoming the commander of an infantry company in the 4th Infantry Regiment. During the Polish–Soviet War, he gained fame as an able commander during the Battle of Lwów and received the Virtuti Militari medal.

After the war, he remained in the military and in 1923 he was promoted to the rank of major, first serving on staff of the 15th Infantry Division of V District Corps Command in Kraków. In 1930, he was promoted to lieutenant colonel and started his service as a commanding officer, first in the 6th Infantry Regiment and then in the 4th Infantry Regiment. Berling retired from active duty in June 1939 because of divorce problems and conflicts with his superiors. [2]

Berling did not participate in the Polish defence effort during the Invasion of Poland in 1939. After the city of Vilnius was occupied by the Soviet Union under the terms of the Molotov–Ribbentrop Pact, Berling, along with many other Polish officers, was arrested by the Soviet secret police (NKVD). He remained in prison until 1940, first in Starobilsk and later Moscow, eventually agreeing to cooperate with the Soviets. [3]

After the Sikorski–Mayski agreement of 17 August 1941, Berling was nominated to be chief of staff of the recreated 5th Infantry Division, and later commander of the temporary camp for Polish soldiers in Krasnovodsk. Berling refused to leave the Soviet Union with the army led by Władysław Anders, of which Berling was formally a member. Along with two other officers, he was tried in absentia before an Anders' Army court which sentenced them to death. [3] The sentence was vacated by General Kazimierz Sosnkowski, the Polish commander-in-chief of forces loyal to the London government in exile.

From 1940, Berling had been involved in efforts to create a Polish division in the Soviet Union, at first within the Soviet Red Army. In September 1942 and during the following months, he and Wanda Wasilewska appealed to Joseph Stalin for permission to establish the Polish division. On 8 April 1943, Berling proposed the establishment of a new Polish army; permission was granted after the break in Soviet-Polish diplomatic relations. [4]

In May 1943, the communist-led Polish People's Army was created in the Soviet Union. It was a new formation of Polish Armed Forces in the East. Berling was nominated to be the commander of its first unit, the 1st Tadeusz Kościuszko Infantry Division, and was promoted to general by Stalin. [4] He became the overall deputy commander of the Polish Army on the Eastern Front on 22 July 1944.

On 1 August 1944, the underground Polish Home Army, loyal to the Polish government-in-exile in London, began the 63-day long Warsaw Uprising, an attempt to free the city from the occupying German forces before the arrival of the Red Army. On 15–23 September, when the uprising was in its later phase, with his First Polish Army on the east bank of the Vistula River and the Praga district of Warsaw already secured, Berling led a rescue effort that involved crossing the Vistula and establishing a bridgehead on the west bank. The failed operation, possibly not fully consulted with Berling's Soviet military superiors, resulted in heavy Polish Army casualties and may have caused Berling's dismissal from his post soon thereafter. [5] He was transferred to the War Academy in Moscow, where he remained until his return to Poland in 1947. In Poland, Berling organized and directed the Academy of General Staff (Akademia Sztabu Generalnego). He retired from the military in 1953.

He is buried at Powązki Military Cemetery in Warsaw.

Zygmunt Szendzielarz was the commander of the Polish 5th Wilno Brigade of the Home Army, nom de guerre "Łupaszka". Led the Dubingiai massacre of at least 20-27 men, women and infants. After the fall of communism, in 1993, Szendzielarz was rehabilitated and declared innocent of all charges.[1] On 2007 Polish president Lech Kaczyński posthumously awarded Szendzielarz with the order of Polonia Restituta.[6] He was executed in the notorious Mokotów Prison as one of anti-communist so-called Cursed soldiers following the Soviet takeover of Poland at the end of World War II. 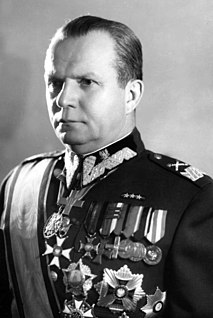 Michał Rola-Żymierski was a Polish high-ranking Communist Party leader, communist military commander and NKVD secret agent. He was appointed as Marshal of Poland by Joseph Stalin, and served in this position from 1945 until his death. He supported the 1981 imposition of Martial law in Poland.

Karol Wacław Świerczewski was a Polish and Soviet Red Army general and statesman. He was a Bolshevik Party member during the Russian Civil War and a Soviet officer in the wars fought abroad by the Soviet Union including the one against Polish as well as Ukrainian Republics and in Republican Spain. In 1939 he participated in the Soviet invasion of Poland again. At the end of World War II in Europe he was installed as one of leaders of the Soviet-sponsored Polish Provisional Government of National Unity. Soon later, Świerczewski died in a country-road ambush shot by the militants from OUN-UPA. He was an icon of communist propaganda for the following several decades.

General Leopold Okulicki was a General of the Polish Army and the last commander of the anti-Nazi underground Home Army during World War II. He was arrested after the war by the Soviet NKVD and murdered while imprisoned at Butyrka prison in Moscow.

Juliusz Zulauf was a Polish Army brigadier general. A recipient of the Virtuti Militari, he fought with distinction during World War I, the Polish-Ukrainian War, the Polish-Soviet War, and the 1939 invasion of Poland. 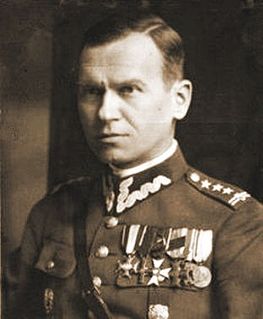 Zygmunt Piotr Bohusz-Szyszko was a Polish general. During World War I he served in the Imperial Russian army. 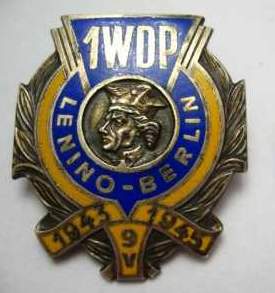 The Polish 1st Tadeusz Kościuszko Infantry Division was an infantry division in the Polish armed forces formed in 1943 and named for the Polish and American revolutionary Tadeusz Kościuszko. Formed in the Soviet Union, it was the first division of the First Army, and of what later became the post-war Polish Armed Forces after defeating the Nazi regime and its collaborators and liberating Poland. 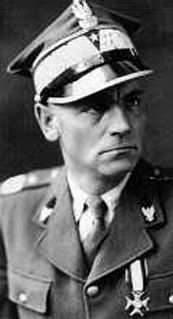 Bronisław Prugar-Ketling was a Polish general.

Józef Rudolf Kustroń was a Brigadier General of the Polish Army in the Second Polish Republic, commandant of the 21st Mountain Infantry Division.

Nikodem Sulik-Sarnowski was an officer of the Russian Imperial Army, and Generał brygady of the Polish Army.

Mieczyslaw Rys-Trojanowski was a General brygady of Polish Army in the Second Polish Republic.

Janusz Julian Głuchowski was a divisional general of the Polish Army in the Second Polish Republic. Born on August 6, 1888 in Bukowa, he fought in Polish Legions in World War I, Polish–Ukrainian War, Polish–Soviet War and the Invasion of Poland. Głuchowski died on June 11, 1964 in London.

Stefan Kossecki was a soldier of the Imperial Russian Army, and Colonel of Infantry of the Polish Army in the Second Polish Republic. Captured by the Soviets in 1939, he was murdered by the NKVD in 1940. On November 9, 2004 Kossecki was posthumously promoted to General brygady.

Kazimierz Wincenty Iranek-Osmecki was an infantry colonel (pułkownik) in the Polish Army, and colonel in Poland's Home Army (AK). He fought in the 1944 Warsaw Uprising, and was responsible for negotiations between the Home Army and the German Wehrmacht.

Fyodor Petrovich Polynin was a Colonel general in the Soviet Air Force, who served in the Air Force of the Polish Army during World War II and received the title Hero of the Soviet Union.