Zygmunt Puławski (October 24, 1901 – March 21, 1931) was a Polish aircraft designer and pilot. He invented a gull-wing aircraft design, also known as "Puławski wing" and designed a series of Polish PZL fighters.

He was born in Lublin. In the summer of 1920, during the Soviet offensive in the Polish-Soviet War, he volunteered for a Boy Scout battalion. In late 1920 he commenced studies at Warsaw University of Technology. He was a member of the Aviation Section of the Students' Mechanical Club, where he constructed some gliders. He distinguished himself as a thorough and able student. In 1925 he graduated from the University, receiving the Engineer title, and left for practice in the Breguet works in France. After his return, he served in the national service, completing military aviation school in Bydgoszcz and becoming a pilot. From 1927 he became a main designer of the Central Aviation Workshops (CWL) at Słupecka Street in Warsaw, soon reorganized into the PZL (Państwowe Zakłady Lotnicze - State Aviation Works).

To meet a requirement of the Polish military department, in 1928 Puławski designed a modern all-metal high-wing fighter with an inline engine, PZL P.1. For the P.1, he invented a gull-wing design, giving the pilot an excellent view from his cockpit. The P.1 was flown in 1929 and met with great interest in the world. Its wing design became also known as "Puławski wing" or "Polish wing", and was later copied in some other designs in the world. The P.1 was not produced, in a favour of Puławski's next designs with a radial engine, preferred by the Polish Air Force. A development of the P/1 was the PZL P.6 with a radial engine, first flown in 1930. With a pilot Bolesław Orliński, it won a National Air Races in the USA. It was named the best fighter in the world by some of military press at that time. Its improved variant, PZL P.7, was produced for the Polish Air Force (150 made). In early 1931 Puławski designed another fighter development PZL P.8, returning to his favourite inline engine. In 1930, he was also ordered to start working upon the P.7 development, with a stronger engine and begun design work upon the PZL P.11 then.

Puławski also flew aircraft in the Warsaw Aeroclub. He died on March 21, 1931 in a crash of his newest amphibious flying boat PZL.12 in Warsaw, at the age of 29 (the plane fell due to strong wind, after take-off). After his death, the PZL P.11 project was finished by Wsiewołod Jakimiuk, becoming the main Polish fighter during the Invasion of Poland 1939. Additionally, a faster export model PZL P.24, based entirely on Puławski's construction features, was developed and sold to some countries.

Puławski was one of the most talented Polish designers. Partly due to his death, Puławski's fighters, most modern in the early 1930s, had not been replaced with modern successors before 1939, when they were already obsolete.

PZL was the main Polish aerospace manufacturer of the interwar period, and a brand of their aircraft. Based in Warsaw between 1928 and 1939, PZL introduced a variety of well-regarded aircraft, most notably the PZL P.11 fighter, the PZL.23 Karaś light bomber, and the PZL.37 Łoś medium bomber.

The PZL.23 Karaś was a Polish light bomber and reconnaissance aircraft designed in the early 1930s by PZL in Warsaw.

The LWS-6 Żubr was a Polish twin-engined medium bomber, produced by the LWS factory before World War II. A short series was used for training only, because it was inferior to the contemporary PZL.37 Łoś design. 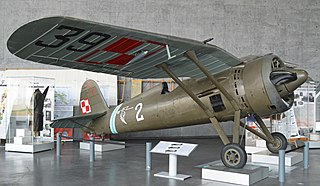 The PZL P.11 was a Polish fighter aircraft, designed and constructed during the early 1930s by Warsaw-based aircraft manufacturer PZL. Possessing an all-metal structure, metal-covering, and high-mounted gull wing, the type held the distinction of being widely considered to have briefly been the most advanced fighter aircraft of its kind in the world.

The PZL P.7 was a Polish gull wing monoplane fighter aircraft designed in the early 1930s at the PZL factory in Warsaw. It was the main fighter of the Polish Air Force between 1933 and 1935. The PZL P.7 was replaced in Polish service by its follow-up design, the PZL P.11c. More than 30 PZL P.7 fighters remained in service during the Invasion of Poland, scoring several kills despite its obsolescence.

The PZL P.24 was a Polish fighter aircraft, designed during the mid-1930s in the PZL factory in Warsaw. It was developed as a dedicated export version of the PZL P.11, a gull wing all-metal fighter designed by Polish aeronautical engineer Zygmunt Puławski.

The RWD 3 was a 1930 Polish sports aircraft and liaison aircraft prototype, constructed by the RWD team, a single-engine high-wing monoplane.

The gull wing is an aircraft wing configuration, known also as Pulaski wings, with a prominent bend in the wing inner section towards the wing root. Its name is derived from the seabirds which it resembles. Numerous aircraft have incorporated such wings for a diverse range of purposes. The gull wing was commonly used to improve visibility in a high wing arrangement, because such wing could be thinnest by the fuselage, and in theory should limit pilot's view no more than A-pillars of a windscreen in a car body.

Ludomił Antoni Rayski was a Polish engineer, pilot, military officer and aviator. He served as the commander of the Polish Air Force between 1926 and 1939, being responsible for modernization of Polish military aviation. Throughout his life he also served in the Austro-Hungarian Army, Polish Legions, Turkish Army, Turkish Air Force, French Air Force, French Foreign Legion and Royal Air Force. He was also known as one of the most colourful personalities of inter-war Poland - and one of its least submissive officers.

Jerzy Dąbrowski was a Polish aeronautical engineer. He was the lead designer of the famed PZL.37 Łoś medium bomber. 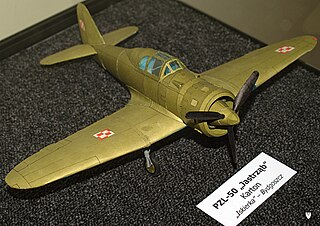 The PZL.50 Jastrząb (hawk) was a Polish pre-war fighter aircraft design by Wsiewołod Jakimiuk of the PZL works. The single-seat low-wing monoplane was to serve as a multi-purpose fighter and escort to replace all other fighters in the Polish Air Force. Designed after 1936, its prototype first flew in February 1939. A further two prototypes were under construction by the time of the Invasion of Poland, but the fighter never entered mass production.

The PZL P.6 was a Polish fighter, designed by the engineer Zygmunt Puławski, manufactured by PZL state-owned factory. It remained a prototype. 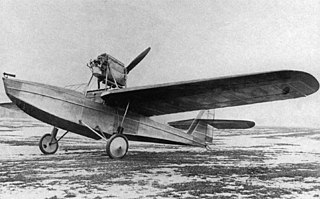 PZL.12 (PZL-H) was a prototype of a Polish amphibious flying boat designed and built in 1931 by Zygmunt Puławski, a pioneering Polish designer. He was killed in a crash involving this design.

The PZL.16 was a Polish passenger aircraft, designed in the early 1930s in the PZL in Warsaw. It remained a prototype.

The PZL Ł.2 was the Polish Army cooperation and liaison aircraft, built in 1929 in the Polskie Zakłady Lotnicze (PZL) in Warsaw. Only a small series of 31 aircraft, including prototype, were made, and used by the Polish Air Force in the 1930s. The aircraft was known in Poland for accomplishing of a long-distance tour around Africa in 1931. 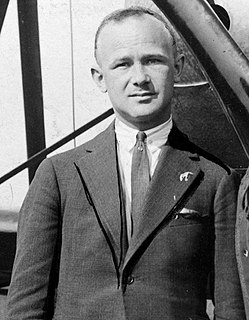 Ryszard Bartel was a Polish engineer, aircraft designer and aviator, one of Poland's aviation pioneers. 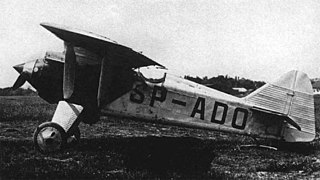 The PZL P.1 was a Polish fighter, designed by the engineer Zygmunt Puławski, manufactured by the PZL state-owned factory. It remained a prototype, but it was the first of the Polish PZL gull wing fighter series, leading to the PZL P.7, PZL P.11 and PZL P.24.

The PZL S-1 was a Polish trainer and liaison aircraft of 1945, which remained a prototype. It was the second aircraft built in Poland after World War II. 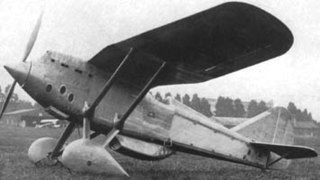