The 2001 FIRA Women's European Championship featured 12 countries and was the first divided into two pools - A and B, with the strongest eight sides in the former. The tournament was also for the first time spread around several grounds in a region, rather than being played at one location. The A Pool was won by Scotland, and the B pool by Sweden. Both France and England were represented by their second string "A" teams.

The second FIRA Women's European Championship saw the debut of Germany and a five-nation event.

The fifth tournament saw virtually the same format as 1997. In Pool A Ireland returned to the competition.

The seventh tournament featured only eight teams, divided into pools A and B. For the first time the A and B pools were also organised as separate competitions in different venues, and in different weeks. The A Pool in Malmö was won by Spain, and the B pool by Netherlands. France and Spain were represented by their respective "A" teams.

For the 2004 competition Pool A reverted to a single eight nation knockout, while Pool B was a round-robin. France repeated Netherlands feat of winning as hosts. The tournament took place at grounds in and around the Midi-Pyrénées region of France between 30 April to 9 May.

With most of the senior nations preparing for the World Cup, FIRA organised a "Women ENC XV a side Tournament" for the six leading nations who were not in the Six Nations. While it does not appear to be part of the Women's European Championship sequence, it was very similar to the European Championship, especially the Pool B competitions.

After several years of low key tournaments with the major nations absent, the 2007 Championship was the largest ever with 16 teams competing in two Pools, including four Six Nations countries, plus Spain keen to do well having been replaced Italy in that competition. England and France were as usual represented by "A" teams, and Wales sent a development squad, but other countries appeared to be at full-strength.

The 1992–94 FIRA Trophy was arranged with a new format. Ten teams were admitted to first division and divided into two pools to play a "Preliminary Tournament", that qualified five teams to play for the Trophy in the 1993–1994 season. France and Italy were the winners of Pools A and B. Russia and Romania also qualified as the runners-up. 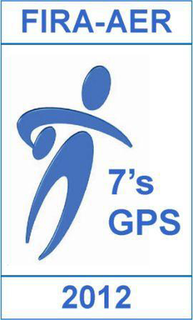 2012 Sevens Grand Prix Series was the 11th round of the Sevens Grand Prix Series for rugby sevens organised by the FIRA – Association of European Rugby. The series was held in three phases hosted by France (Lyon), Russia (Moscow) and Denmark (Odense). The tournament was won by France, who defeated Portugal 21–12 in the final. England, winner of the first two phases of the tournament, were considered to be favourites but eliminated by France in the quarter-finals. England were the overall champions of the tournament.

The Rugby Europe Sevens, whose main division is the Sevens Grand Prix Series, are a series of rugby sevens tournaments held by Rugby Europe. It was formerly known as the FIRA-AER Sevens until 2013, with only one annual tournament prior to 2011, when it was reorganized as a series of tournaments, following the model of the World Rugby Sevens Series, and named the Sevens Grand Prix Series. Rugby Europe also sponsors continental sevens tournaments divided into multiple divisions, incorporating a promotion/relegation system.