Crespin is a commune in the Nord department in northern France. The town of Crespin was founded in 648 with the building of the Crespin Abbey by Saint Landelin.

Les Ateliers de Construction du Nord de la France (The Construction Workshops in the North of France) was founded in 1882 as a subsidiary of Franco-Belgian company La Métallurgique. [1] [2] [n 1] The company was established to avoid import tariffs imposed in 1881 in France on goods imported from Belgium. [5]

La Louvière is a Walloon city and municipality located in the Belgian province of Hainaut. La Louvière's municipality includes the old communes of Haine-Saint-Paul, Haine-Saint-Pierre, Saint-Vaast, Trivières, Boussoit, Houdeng-Aimeries, Houdeng-Gœgnies, Maurage, and Strépy-Bracquegnies. La Louvière is the capital of the Centre region, a former coal mining area in the sillon industriel, between the Borinage to the West and the Pays Noir to the East.

During World War One the factory was occupied by the Germans, and its material removed to Germany. Post war the factory was rebuilt and its machinery recovered. By 1928 production had reached pre-war levels and employed around 4000 people. The Great Depression caused a reduction in the workforce to half previous, and a similar decrease in production. [7]

In 1934 the company acquired part of the shares of Sambre et Meuse, which became an important manufacturer of cast steel parts for rolling stock (i.e. bogies). [8]

During the Second World War the main ANF plant at Blanc-Misseron initially produced orders for military use, and was later occupied by the German forces. The plant was a target of Allied bombing in 1944 due to its use in keeping the rail network in occupied territory running. [9]

In 1970 ANF Industrie produced the Turbotrain, a high-speed gas turbine train. It saw limited success due to the oil crisis of the late 1970s, and was overshadowed by the TGV. [10]

In 1987 the Francorail industrial association ended, due to the transfer of Schneider group's railway activities to Alsthom; the resultant isolation of ANF within the railway sector led to its acquisition by Bombardier in 1989. [12] [13]

In November 2001 after the acquisition of Adtranz, Bombardier indicated that the plant would be one of three main sites in Europe for bogie manufacture, and a core site for final assembly. [14] Bombardier has made the plant one of its key production sites with over 2000 employees (2010), and claims an investment of over €500 million. The site accounts for around one third of French domestic passenger rail production. [15]

Imphy is a commune in the Nièvre department in Bourgogne, France. 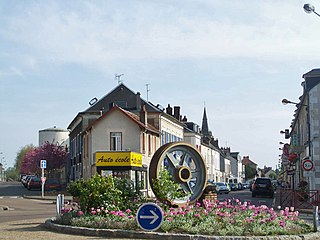 Fourchambault is a commune in the Nièvre department in central France.

The Société générale de Belgique was a large Belgian bank and later holdings company which existed between 1822 and 2003.

Ferrière-la-Grande is a commune in the Nord department in northern France.

The Ateliers Germain was a Belgian engineering manufacturing company based in Monceau-sur-Sambre near Charleroi. The company manufactured motorcars under license in the early 20th century until the First World War, after which is concentrated on rail vehicle manufacture.

Creusot-Loire was a French engineering conglomerate.

CFL's 2000 Class is a series of electric multiple units used on the Luxembourg railway network. They were built in 1990-1992 by a consortium of De Dietrich, ANF and Alsthom and are similar to SNCF's Z 11500 class.

Francorail was a grouping of French railway rolling stock manufacturers, formed in the early 1970s and defunct by the late 1980s.

The UEC Preston is a tram built by the British manufacturer United Electric Car Company for the Anglo-Argentine Tramways Company (AATC) in 1912 for use on its then newly built underground tramway in Buenos Aires, which was later to become Line A of the Buenos Aires Underground. Only 4 trams were built and they served on the line up until their retirement in 1977.

The Ateliers et Chantiers de France was a major shipyard that was established in Dunkirk, France, in 1898. The shipyard boomed in the period before World War I (1914–18), but struggled in the inter-war period. It was badly damaged during World War II (1939–45). In the first thirty years after the war the shipyard again experienced a boom and employed up to 3,000 workers making oil tankers, and then liquid natural gas tankers. Demand dropped off in the 1970s and 1980s. In 1972 the shipyard became Chantiers de France-Dunkerque, and in 1983 merged with others yards to become part of Chantiers du Nord et de la Mediterranee, or Normed. The shipyard closed in 1987.

The Dépôt Joseph Cuvelier of the Belgian State Archives opened in 2011. It is located on the Rue du Houblon in Brussels in a building designed by Fernand Bodson and built in 1912. Its name honors Belgian historian and government archivist Joseph Cuvelier (1869-1947).

The Comptoir Métallurgique de Longwy was a cartel of iron smelters seated in Longwy, a town in Lorraine, department Meurthe-et-Moselle, France. In a narrower sense of the term, the ‘Comptoir de Longwy’ was only the ‘’sales agency’’ of the respectively underlying cartel, which also enclosed its member firms and possible other cartel organs. As a legal entity, the Comptoir Métallurgique de Longwy existed from December 10, 1876 to February 1, 1921. It should not be mixed up with the Aciéries de Longwy, which was temporarily a member firm of the cartel not earlier than 1880 and survived the cartel up to 1978.