Angels of the Street

Angels of the Street or The Angel of St. Pauli (German : Die Engel von St. Pauli) is a 1969 West German crime film directed by Jürgen Roland and starring Horst Frank, Herbert Fux and Werner Pochath. [1] It is set in the St. Pauli red light district of the port of Hamburg.

The film's sets were designed by the art director Dieter Bartels.

The Biermann-Ratjen-Medaille is an award of the City of Hamburg, Germany. It was founded in 1978 by the Senate of the Free and Hanseatic City of Hamburg to commemorate the achievements of the previous senator of culture Hans-Harder Biermann-Ratjen. The award is given to people, groups and institutions who have made outstanding contributions to the culture of Hamburg. The Praeses of the Department of Culture decides on the recipients and awards the medal on behalf of the Senate.

Tante Trude aus Buxtehude is a 1971 West German comedy film directed by Franz Josef Gottlieb and starring Rudi Carrell, Ilja Richter and Theo Lingen. It was one of several German films in the wake of Some Like it Hot that used cross-dressing as a comic theme.

Shadows Over St. Pauli is a 1938 German drama film directed by Fritz Kirchhoff and starring Marieluise Claudius, Gustav Knuth and Hellmuth Bergmann. It was filmed and shot in Hamburg, and the title refers to the St. Pauli district of the city.

Rosemary's Daughter is a 1976 West German sex comedy film directed by Rolf Thiele and starring Lillian Müller, Béla Ernyey, and Werner Pochath. It is based on the story of Rosemarie Nitribitt, which Thiele had already treated more seriously in the 1958 drama Rosemary. 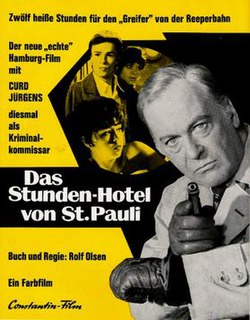 Hotel by the Hour is a 1970 West German crime film directed by Rolf Olsen and starring Curd Jürgens, Andrea Rau, and Corny Collins. It is set in the red-light district of St. Pauli in Hamburg. A Stundenhotel is a motel where rooms are let by the hour, similar to Japanese love hotels. 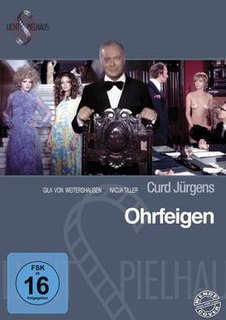 The Night of the Storm or Tempestuous Love is a 1957 West German drama film directed by Falk Harnack and starring Lilli Palmer, Ivan Desny and Willy A. Kleinau. 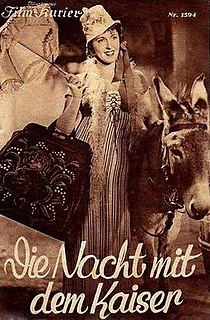 The Night With the Emperor is a 1936 German historical comedy film directed by Erich Engel and starring Jenny Jugo, Richard Romanowsky, and Friedrich Benfer. The film is set in 1808 at the Congress of Erfurt.

Murderer in the Fog is a 1964 West German crime film directed by Eugen York and starring Hansjörg Felmy, Ingmar Zeisberg and Elke Arendt. The police investigate a series of attacks in a small German town.

Rheinsberg is a 1967 West German romantic comedy film directed by Kurt Hoffmann and starring Cornelia Froboess, Christian Wolff and Werner Hinz. The film is based on a novel by Kurt Tucholsky set partly in Rheinsberg. Four years earlier Hoffmann had directed another Tucholsky adaptation Gripsholm Castle.

The Mimosa Wants to Blossom Too is a 1976 West German comedy spy film directed by Helmut Meewes and starring Curd Jürgens, Eric Pohlmann and Horst Frank.

Between Shanghai and St. Pauli is a 1962 West German-Italian crime adventure film directed by Roberto Bianchi Montero and Wolfgang Schleif and starring Karin Baal, Joachim Hansen and Horst Frank. It is also known by the alternative title Voyage to Danger.