This disambiguation page lists articles associated with the title Bavian.
If an internal link led you here, you may wish to change the link to point directly to the intended article. 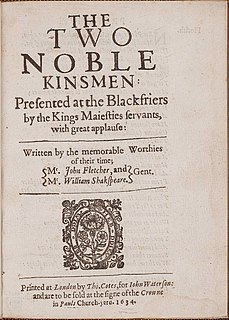 The Two Noble Kinsmen is a Jacobean tragicomedy, first published in 1634 and attributed jointly to John Fletcher and William Shakespeare. Its plot derives from "The Knight's Tale" in Geoffrey Chaucer's The Canterbury Tales, which had already been dramatised at least twice before. This play is believed to have been William Shakespeare's final play before he retired to Stratford-Upon-Avon and died three years later.

Be bold may refer to:

Marduk-nādin-aḫḫē, inscribed mdAMAR.UTU-na-din-MU, ca. 1099 – 1082 BC, was the sixth king of the Second Dynasty of Isin and the 4th Dynasty of Babylon. He is best known for his restoration of the Eganunmaḫ in Ur and the famines and droughts that accompanied his reign.

Information source may refer to:

Twilight series may refer to:

Neutral point of view may refer to:

Tina Lund is a Danish professional equestrian living in Skævinge, Nordsjælland in Danmark

Ashley Lane may refer to:

LGBTQ+ literature may refer to:

Router may refer to:

Supernatural is a 1933 American pre-Code supernatural horror film directed by Victor Halperin, and starring Carole Lombard and Alan Dinehart. The film follows a woman who attends a staged séance only to find herself possessed by the spirit of an executed murderess.

Red link may refer to:

Bavian is a village in Qalkhani Rural District, Gahvareh District, Dalahu County, Kermanshah Province, Iran. At the 2006 census, its population was 229, in 46 families.

In tennis, Prague Open may refer to:

Baboon is a 2006 short story collection by Danish author Naja Marie Aidt. It was translated into English by Denise Newman in 2014.

Cambridge Movement may refer to:

Symantec may refer to:

Taylor Swift discography may refer to:

Khinnis is an Assyrian archaeological site in Duhok Governorate in the Kurdistan Region of Iraq. It is notable for its rock reliefs, built by king Sennacherib around 690 BC.

Charles White Jr., known online as Cr1TiKaL, is an American YouTuber and Twitch streamer. He became popular for his gameplay and commentary videos of various video games on his penguinz0 YouTube channel, mainly due to his monotone voice and deadpan delivery of humorous commentary. In addition to his gaming content, White also uploads podcasts and music onto his YouTube channel, as a co-host of The Official Podcast and a member of The Gentle Men respectively. White also uploads vlogging content, and his comedic commentary videos have established him as a well-known and well-respected personality within the website's commentary community.