Last updated December 25, 2020
Type of bed in a vehicle
For other uses, see Berth.

A berth is a bed or sleeping accommodation on vehicles. Space accommodations have contributed to certain common design elements of berths.

Beds in boats or ships

While beds on large ships are little different from those on shore, the lack of space on smaller yachts means that bunks must be fit in wherever possible. Some of these berths have specific names:

V-berth
Frequently yachts have a bed in the extreme forward end of the hull (usually in a separate cabin called the forepeak). [1] Because of the shape of the hull this bed is basically triangular, though most also have a triangular notch cut out of the middle of the aft end, splitting it partially into two separate beds and making it more of a V shape, hence the name. This notch can usually be filled in with a detachable board and cushion, creating something more like a double bed (though with drastically reduced space for the feet; 12" wide is typical). The term "V-berth" is not widely used in the UK, instead the cabin as a whole (the forepeak) is usually referred to.

Settee berth
The archetypal layout for a small yacht has seats running down both sides of the cabin, with a table in the middle. At night, these seats can usually be used as beds. Because the ideal ergonomic distance between a seat-back and its front edge (back of the knee) makes for a rather narrow bed, good settee berths will have a system for moving the back of the settee out of the way; this can reveal a surprisingly wide bunk, often running right out to the hull side underneath the lockers. If they are to be used at sea, settee berths must have lee-cloths to prevent the user falling out of bed. Sometimes the settee forms part of a double bed for use in harbour, often using detachable pieces of the table and extra cushions. Such beds are not usually referred to as settee berths.

Pilot berth
A narrow berth high up in the side of the cabin, usually above and behind the back of the settee and right up under the deck. Sometimes the side of this bunk is "walled in" up to the sleeper's chest; there may even be small shelves or lockers on the partition so that the bed is "behind the furniture". The pilot berth is so called because originally they were so small and uncomfortable that nobody slept in them most of the time; only the pilot, if he had to spend a night on board, would be offered it.

Quarter berth
A single bunk tucked under the cockpit. Usually found in smaller boats where there is not room for a cabin in this location. [2]

Lee cloths
Are sheets of canvas or other fabric attached to the open side of the bunk (very few are open all round) and usually tucked under the mattress during the day or when sleeping in harbour. The lee cloth keeps the sleeping person in the bunk from falling out when the boat heels during sailing or rough weather. [3]

Long-distance trains running at night usually have sleeping compartments with sleeping berths. In the case of compartments with two berths, one is on top of the other in a double-bunk arrangement. These beds (the lower bed in a double-bunk arrangement) are usually designed in conjunction with seats which occupy the same space, and each can be folded away when the other is in use. [4]

Sleeper trains are very common especially in Europe, India and China. Sleeper trains usually consist of single or double-berth compartments [4] as well as couchette which have 4 or 6 berths (consisting of a bottom, middle and top bunk on each side of the compartment). [5]

The berths clustered in compartments contrasted with the berths in the open sections of Pullman cars in the United States, common until the 1950s. In these cars passengers faced each other in facing seats during the day. Porters pulled down the upper berth, and brought the lower seats together to create the lower berth. All of these berths faced the aisle running down the center of the sleeping car. Each berth had a curtain for privacy away from the aisle.

Long-haul truckers sleep in berths known as sleeper cabs contained within their trucks. The sleeper-berth's size and location is typically regulated. [6]

The sleeping car or sleeper is a railway passenger car that can accommodate all passengers in beds of one kind or another, primarily for the purpose of making nighttime travel more comfortable. George Pullman was the American innovator of the sleeper car.

A couchette car is a railway carriage conveying non or semi-private sleeping accommodation. 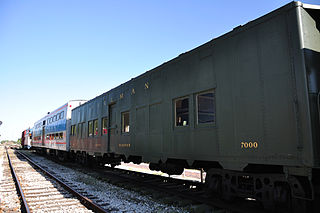 In United States railroad terminology, a troop sleeper was a railroad passenger car which had been constructed to serve as something of a mobile barracks for transporting troops over distances sufficient to require overnight accommodations. This method allowed part of the trip to be made overnight, reducing the amount of transit time required and increasing travel efficiency. 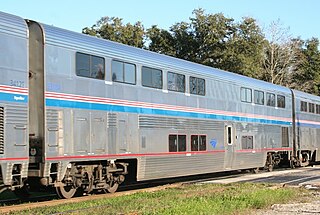 A passenger car is an item of railway rolling stock that is designed to carry passengers. The term passenger car can also be associated with a sleeping car, a baggage car, a dining car, railway post office and prisoner transport cars.

City Night Line, abbreviated CNL, was a train category of German railway company Deutsche Bahn for overnight passenger train services between Germany and neighbouring European countries. In late 2015, Deutsche Bahn announced that it planned to terminate all night train services in December 2016, and this plan was implemented on 11 December 2016. The service on some CNL routes was replaced by ÖBB Nightjet services. 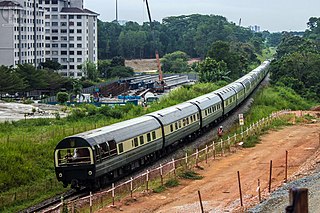 The Eastern & Oriental Express is a luxury train that carries passengers between Singapore, Malaysia, and Thailand.

The Islander 36 sloop is an inboard-powered, family cruiser and weekend racer with berths for six.

A roomette is a type of sleeping car compartment in a railroad passenger train. The term was first used in North America, and was later carried over into Australia and New Zealand. Roomette rooms are relatively small, and were originally generally intended for use by a single person; contemporary roomettes on Amtrak, however, include two sleeping berths.

The North 26 is a boat designed by Julian D Everitt in 1982, Cowes UK, designer of the very successful E boat. Big brother to the E-boat, intended for Yacht racing Inshore and in Junior Offshore Group races to rate under Channel now IRC measurement rule. Examples race the English Channel and have a wide flat sole plate that enables them to sit the mud in English ports with the keel retracted. This feature also enables safe beach sitting whilst cruising and use as a Trailer yacht. 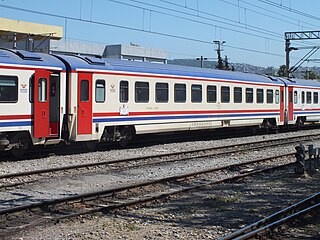 The TÜVASAŞ 2000 or more commonly known as TVS2000 is a series of intercity railcars built by TÜVASAŞ for the Turkish State Railways between 1993 and 2005. They were built in order to revive TCDD's failing image in the early 1990s, for use on the Capital Express. Today they are the most common railcars in Turkey.

This article is intended as a catalogue of sleeping carriages used by the Victorian Railways and successors.

NSB WLAB-2 or WLAB2 is a class of twenty sleeping cars built by Strømmens Verksted for the Norwegian State Railways (NSB). They serve as the sole sleepers in Norway, being used on the Bergen Line, Dovre Line, Nordland Line and Sørlandet Line. Each car features fifteen compartments, which can each be utilized with a single or twin bunk configuration. The carriages have a unique octagonal shape, are 27 meters (89 ft) long and weigh 48 tonnes.

The Bahama 30 is an American sailboat that was designed by Bob Finch as a cruiser and first built in 1973.

The Freedom 35 is an American sailboat that was designed by David Pedrick as a racer/cruiser and first built in 1993.

The Vancouver 36 is an American sailboat that was designed by Robert B. Harris as a bluewater ocean cruiser and first built in 1977.