The Blue Book is a publication of The Jockey Club (U.S.) which lists the highest standard of thoroughbred horseraces in the world, which are collectively known as Group races. Its publication is overseen and approved by the International Cataloguing Standards Committee (ICSC) of the Society of International Thoroughbred Auctioneers (SITA). The ICSC plays a central role as regulator of international stakes quality, and provides a process for requests to have races sanctioned as Group races. 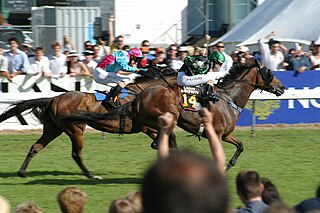 International Chemical Safety Cards (ICSC) are data sheets intended to provide essential safety and health information on chemicals in a clear and concise way. The primary aim of the Cards is to promote the safe use of chemicals in the workplace and the main target users are therefore workers and those responsible for occupational safety and health. The ICSC project is a joint venture between the World Health Organization (WHO) and the International Labour Organization (ILO) with the cooperation of the European Commission (EC). This project began during the 1980s with the objective of developing a product to disseminate the appropriate hazard information on chemicals at the workplace in an understandable and precise way.

ICSC can refer to:

Tom Harris is a Canadian mechanical engineer, executive director of the climate contrarian lobby group International Climate Science Coalition (ICSC) and former executive director of the Natural Resources Stewardship Project. Harris has 30 years’ experience working as a mechanical engineer, project manager, and in science and technology communications. From May to September 2006, he was Ottawa operations director of the High Park Group, a public relations and lobbying firm active in creating debate over global warming.

The International Cataloguing Standards Committee (ICSC), formed in 1981, is an organization in Thoroughbred racing which aims at achieving uniformity of cataloguing standards throughout the world during the internationalization of thoroughbred breeding, racing, and marketing.

The FTBOA Florida Sire Stakes Susan's Girl division is a thoroughbred horse race run annually at Gulfstream Park, in Hallandale Beach, Florida for two-year-old fillies sired by FTBOA registered stallions at a distance of seven furlongs on dirt. It is part of the eleven-race Florida Thoroughbred Breeders' & Owners' Association (FTBOA) Florida Sire series of which seven races are hosted by Gulfstream Park and four by Tampa Bay Downs.

The Florida Sire Stakes Desert Vixen division is a thoroughbred horse race run annually at Gulfstream Park, in Hallandale Beach, Florida for two-year-old, fillies by FTBOA registered stallions at a distance of six furlongs on dirt. It is part of the eleven-race Florida Thoroughbred Breeders' & Owners' Association (FTBOA) Florida Sire series of which seven races are hosted by Gulfstream Park and four by Tampa Bay Downs.

The FTBOA Florida Sire Stakes My Dear Girl division is a Thoroughbred horse race run annually at Gulfstream Park, in Hallandale Beach, Florida for two-year-old fillies by FTBOA registered stallions at a distance of a mile and a sixteenth on dirt. It is part of the eleven-race Florida Thoroughbred Breeders' & Owners' Association (FTBOA) Florida Sire series of which seven races are hosted by Gulfstream Park and four by Tampa Bay Downs.