CSS Savannah is the name of two ships in the Confederate States Navy:

Savannah or Savanna is a type of grassland.

USS Essex was a 1000-ton ironclad river gunboat of the United States Army and later United States Navy during the American Civil War. It was named for Essex County, Massachusetts. USS Essex was originally constructed in 1856 at New Albany, Indiana as a steam-powered ferry named New Era. 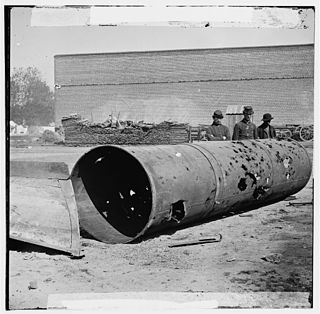 CSSVirginia II was a Confederate Navy steam-powered ironclad ram laid down in 1862 at the William Graves' shipyard in Richmond, Virginia. Acting Constructor William A. Graves, CSN, was the superintendent in charge of her construction. In order to conserve scarce iron plating, he ordered the ship's armored casemate shortened from the specifications given in John L. Porter's original building plans; in addition, the ship's iron-plating, while six inches thick on the casemate's forward face, was reduced to five inches on her port, starboard, and aft faces. Due to the shortening of her casemate, the number of her cannon were reduced to a single 11" smoothbore, a single 8" rifle, and two 6.4" rifles. 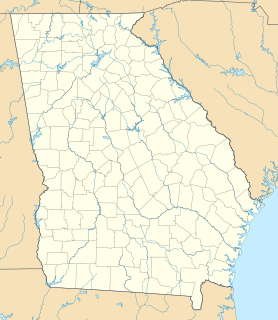 CSS Georgia, also known as State of Georgia and Ladies' Ram, was an ironclad warship built in Savannah, Georgia in 1862 during the American Civil War. The Ladies' Gunboat Association raised $115,000 for her construction to defend the port city of Savannah.

CSS Raleigh may refer to:

William Augustin Webb was an American sailor and Mexican–American War veteran who resigned his United States Navy commission after more than 20 years of service to join the Confederate States Navy in the American Civil War. Webb was decorated for his service as Captain of the CSS Teaser, part of the James River Squadron, during the Battle of Hampton Roads (1862).

USS Cairo was one of the first American ironclad warships built at the beginning of the U.S. Civil War.

CSSIsondiga was a small wooden gunboat without masts that served in the Confederate States Navy during the American Civil War.

CSSResolute was a tugboat built in 1858 at Savannah Georgia as the Ajax which served in the Confederate States Navy during the American Civil War.

CSS Savannah, later called Old Savannah and Oconee, was a gunboat in the Confederate States Navy during the American Civil War. 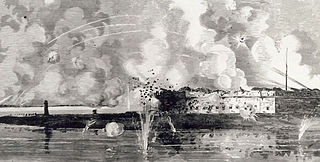 The Siege of Fort Pulaski concluded with the Battle of Fort Pulaski fought April 10–11, 1862, during the American Civil War. Union forces on Tybee Island and naval operations conducted a 112-day siege, then captured the Confederate-held Fort Pulaski after a 30-hour bombardment. The siege and battle are important for innovative use of rifled guns which made existing coastal defenses obsolete. The Union initiated large-scale amphibious operations under fire.

Missouri is a midwestern U.S. state.

USS Unadilla was a Unadilla-class gunboat built for service with the United States Navy during the American Civil War. She was the lead ship in her class.

CSS Neuse was a steam-powered ironclad ram of the Confederate States Navy that served in the latter part the American Civil War and was eventually scuttled to avoid capture by rapidly advancing Union Army forces. In the early 1960s, she produced approximately 15,000 artifacts from her raised lower hull, the largest number ever found on a recovered Confederate vessel. The remains of her lower hull and a selection of her artifacts are on exhibit in Kinston, North Carolina at the CSS Neuse Interpretive Center State Historic Site, which belongs to the North Carolina Department of Natural and Cultural Resources. The ironclad is listed on the National Register of Historic Places.

The Battle of Lucas Bend took place on January 11, 1862 near Lucas Bend, four miles north of Columbus on Mississippi River in Kentucky as it lay at the time of the American Civil War. In the network of the Mississippi, Tennessee and Ohio rivers, the Union river gunboats under Flag Officer Andrew Hull Foote and General Ulysses S. Grant sought to infiltrate and attack the Confederate positions in Tennessee. On the day of the battle, the Union ironclads Essex and St Louis, transporting troops down the Mississippi in fog, engaged the Confederate cotton clad warships General Polk, Ivy and Jackson and the gun platform New Orleans at a curve known as Lucas Bend in Kentucky. The Essex, under Commander William D. Porter, and the St Louis forced the Confederate ships to fall back after an hour of skirmishing during which the Union commander was wounded. They retreated to the safety of a nearby Confederate battery at Columbus, where the Union vessels could not follow.

The Battle of Trent's Reach was one of the final major naval battles of the American Civil War. Beginning on January 23, 1865, a powerful flotilla of Confederate warships bombarded Fort Brady along the James River and engaged four Union Navy ships with the intention of breaking through the blockade to attack City Point, the base of General Ulysses S. Grant who was besieging Petersburg, Virginia. After two days of fighting, the rebels withdrew back up the river without completing their objectives.

CSS Tuscaloosa may refer to: