Cheryl Waters (born January 18, 1947) is an American film and television actress. Her most famous role was the female lead in the 1974 film, Macon County Line .

Macon County Line is a 1974 American independent film directed by Richard Compton and produced by Max Baer Jr. Baer and Compton also co-wrote the film, in which Baer stars as a vengeful county sheriff in Georgia out for blood after his wife is brutally killed by a pair of drifters.

One of her earliest film appearances was in the 1971 biker film, Ride the Hot Wind , which starred Tommy Kirk, Duke Kelly, and Sherry Bain. [1] After that she played the part of Bonnie, a young lady who was having an affair with Robert Matthews, her psychology professor in the Don Jones directed 1971 exploitation film, Schoolgirls in Chains. [2] [3] She played the female lead in Richard Compton's 1974 film, Macon County Line . Her character, the attractive Jenny Scott is making her way to Dallas and is picked up by good-time seeking brothers Chris and Wayne Dixon (played by Alan and Jesse Vint) who are making their way south-by-southwest. Their fun times eventually comes to an end when they eventually find trouble. [4] [5] In 1978, Kevin Dobson's Image of Death was released. Waters played the part of Barbara Shields. Cathey Paine, Tony Bonner and Penne Hackforth-Jones also starred in the film. [6]

Ride the Hot Wind is a 1971 film. It was made by Ted Kelly who was a good friend of Audie Murphy.

Thomas Lee Kirk is an American former actor and later a businessman. He was best known for his performances in a number of highly popular films made by Walt Disney Studios such as Old Yeller, The Shaggy Dog, The Swiss Family Robinson, The Misadventures of Merlin Jones, as well as the beach-party films of the mid-1960s.

Sherry Bain is an actress from Angeles, California. She started her career in some exploitation films. She co-starred with Robert Fuller in The Hard Ride in 1971, Wild Riders in 1971, The Ballad of Billie Blue in 1972, an episode of Bearcats!, Pipe Dreams in 1976, Poco... Little Dog Lost in 1977, and Wild and Wooly in 1978. By the early 1970s, her career was moving and she was on the verge of major stardom.

She played the part of Lorraine Webster in the Real Mothers episode of The Trials of Rosie O'Neill which aired in September 1991. [7]

The Trials of Rosie O'Neill is an American drama series which aired on CBS from September 17, 1990 to May 30, 1992. The show stars Sharon Gless as Fiona Rose "Rosie" O'Neill, a lawyer working in the public defender's office for the City of Los Angeles. The show marked the return of Gless to series television after her run on Cagney & Lacey.

The Sandlot is a 1993 American coming-of-age comedy film co-written, directed, and narrated by David Mickey Evans which tells the story of a group of young baseball players during the summer of 1962. It stars Tom Guiry, Mike Vitar, Karen Allen, Denis Leary, and James Earl Jones. The filming locations were in Midvale, Salt Lake City, and Ogden, Utah. It grossed $33 million worldwide and has become a cult film.

Human Highway is a 1982 American comedy film starring and co-directed by Neil Young under his pseudonym Bernard Shakey. Dean Stockwell co-directed the film and acted along with Russ Tamblyn, Dennis Hopper, and the band Devo. Included is a collaborative performance of "Hey Hey, My My " by Devo and Young with Booji Boy singing lead vocals and Young playing lead guitar.

Dagon is a 2001 Spanish horror film directed by Stuart Gordon and written by Dennis Paoli. Despite the title, the plot is actually based loosely on H. P. Lovecraft's novella The Shadow Over Innsmouth rather than his earlier short story "Dagon" (1919). The film takes place in "Imboca", a Spanish adaptation of "Innsmouth".

The Swimmer is a 1968 American Technicolor drama film starring Burt Lancaster with Janet Landgard and Janice Rule in featured roles. The film was written and directed by Academy Award-nominated husband-and-wife team of Eleanor Perry and Frank Perry (director). The story is based on the 1964 short story "The Swimmer" by John Cheever, which appeared in the July 18, 1964 issue of The New Yorker. The 95-minute movie adds new characters and scenes consistent with those in the original 12-page short story. 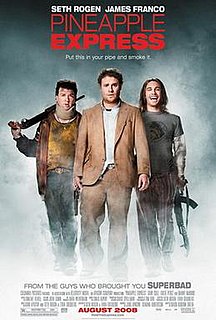 Pineapple Express is a 2008 American stoner action comedy film directed by David Gordon Green, written by Seth Rogen and Evan Goldberg and starring Rogen and James Franco. The plot concerns a process server and his marijuana dealer as they are forced to flee from hitmen and a corrupt police officer after witnessing them commit a murder. Producer Judd Apatow, who previously worked with Rogen and Goldberg on Knocked Up and Superbad, assisted in developing the story.

College Road Trip is a 2008 American family comedy film directed by Roger Kumble and starring Martin Lawrence, Raven-Symoné, Brenda Song, Margo Harshman, and Donny Osmond. The film centers on college-bound teen Melanie Porter (Raven-Symoné), who goes on a road trip to different colleges with her father. The film was released by Walt Disney Pictures in the United States on March 7, 2008. The film garnered negative reviews from critics.

Princess Protection Program is a 2009 Disney Channel Original Movie, directed by Allison Liddi-Brown and starring Demi Lovato and Selena Gomez. The script was written by Annie DeYoung from a story by Annie DeYoung and David Morgasen. The film premiered on June 26, 2009 in the United States on Disney Channel and was released on DVD on June 30, 2009. The film won the 2009 Teen Choice Awards for Choice Summer Movie. 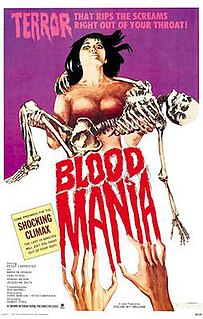 Blood Mania is a 1970 American horror film written by Peter Carpenter and Tony Crechales and directed by Robert Vincent O'Neil, and starring Carpenter, Maria De Aragon, Vicki Peters, Reagan Wilson, and Alex Rocco. The film stars Carpenter as a doctor whose mistress, an heiress, murders her terminally ill father to help him pay off a debt. 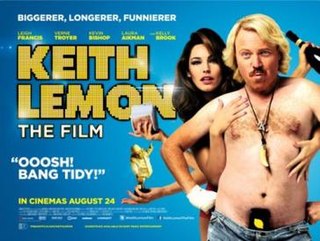 Keith Lemon: The Film is a 2012 British comedy film written and directed by Paul Angunawela, and co-written by and starring Leigh Francis as television personality Keith Lemon. The film co-stars Verne Troyer as his guardian angel, Archimedes, Kevin Bishop as his best friend, Dougie, Laura Aikman as Keith's girlfriend Rosie and Kelly Brook as Herself. The film also features a selection of celebrity cameos, including appearances by David Hasselhoff, Ronan Keating, Gary Barlow, Peter Andre, Fearne Cotton, Emma Bunton and Jedward, amongst others. 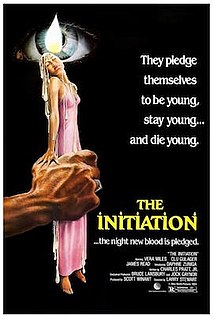 The Initiation is a 1984 American slasher film directed by Larry Stewart, and starring Daphne Zuniga, Clu Gulager, Vera Miles, and Hunter Tylo. The plot focuses on a sorority member who, after being plagued by a horrific recurring dream her whole life, is stalked along with a group of pledges during their initiation ritual in a department store after hours.

An American Hippie in Israel, also known as Ha-Trempist, is a 1972 Israeli metaphorical counter-culture film written and directed by Amos Sefer starring Asher Tzarfati. Many have cited this film as one of the worst films ever made. Once thought lost, it was rediscovered decades later by the cult film enthusiasts at Grindhouse Releasing who have digitally restored the film and presented it in Blu-ray and DVD. 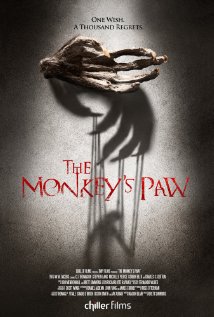 The Monkey's Paw is a 2013 American horror film based on the short story of the same name by author W. W. Jacobs. The film revolves around Jake Tilton who receives a mysterious monkey's paw talisman which grants him three wishes. The film was directed by Brett Simmons, written by Macon Blair and produced by Ross Otterman for TMP Films, and is a Chiller Films presentation.

Live Tour 2015: Walk of My Life is Koda Kumi's fourteenth concert video and coincides with her album Walk of My Life. It debuted at #2 on the Oricon DVD charts. The concert was supported by Mercedes-Benz.

Beatrice Giuditta Welles is an American former child actress, known for her roles in the film Chimes at Midnight (1966) and the documentary travelogue In the Land of Don Quixote (1964). The daughter of American filmmaker Orson Welles and Italian countess Paola Mori, she is a former model, radio and TV personality, founder of a cosmetics line and designer of handbags and jewelry. She administers the estate of Orson Welles.

Massage Parlor Murders! is a 1973 exploitation crime-horror film directed by Chester Fox and Alex Stevens. The film stars George Spencer, John Moser, Sandra Peabody, Brother Theodore and George Dzundza, who respectively portray Rizotti, Detective O'Mara, Gwen, Theodore, and Mr. Creepy. The film revolves around the detectives Rizotti (Spencer) and O'Mara (Moser) as they investigate the murders of massage parlor workers in the New York area. Marketed as being similar in tone to Alfred Hitchcock's psychological horror film Psycho (1960), the film was released into drive-in theaters and the grindhouse circuit in 1973. Subsequently, the film began to be advertised as a sexploitation film and was released under the title Massage Parlor Hookers! with the horror film elements being removed. The film didn't have a home video release until 2013.