Comboios is an Indigenous Land of the tupiniquim people in the Brazilian state of Espírito Santo. In 1997 the first assembly of the tupinikim and guarani peoples was held here. Comboios was the only village in the area not participating in the protests against the Aracruz corporation, which is active in deforestation of rain forests. Comboios is within the Aracruz municipality. 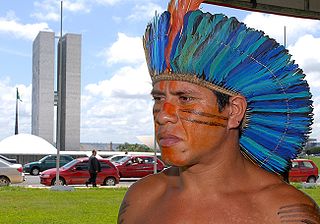 The Federative Republic of Brazil is a union of 27 federated units : 26 states and one federal district. The states are generally based on historical, conventional borders which have developed over time. The Federal District cannot be divided into municipalities, according to the Brazilian Constitution, the Federal District assumes the same constitutional and legal powers, attributions and obligations of the states and municipalities, instead, it is divided by administrative regions. 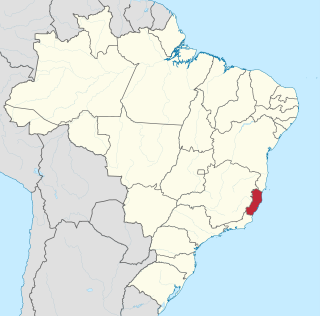 Espírito Santo is a state in southeastern Brazil. Its capital is Vitória, and its largest city is the nearby Vila Velha. With an extensive coastline, the state hosts some of the country's main ports, and its beaches are significant tourist attractions.

Aracruz is a municipality at the central coast of Espírito Santo, Brazil.

Lyptus is the trade name of a wood made from a hybrid of two species of Eucalyptus tree, Eucalyptus grandis and Eucalyptus urophylla. Developed for quick harvesting, and grown on plantations in Brazil, Lyptus is marketed as an environmentally friendly alternative to oak, cherry, mahogany, and other wood products that may be harvested from old growth forests. Lyptus trees can be harvested for lumber in approximately 15 years, much sooner than woods from cooler climates.

The Campeonato Capixaba is the football league of the Brazilian state of Espírito Santo. 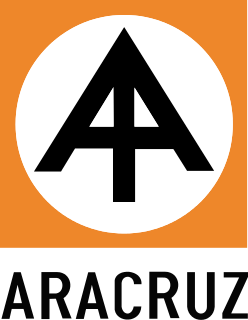 Aracruz Celulose S.A. was a Brazilian manufacturer of pulp and paper. In 2009 the company merged with VCP and renamed Fibria. The new company maintained its headquarters in Sao Paulo, and is a supplier of bleached eucalyptus pulp. The current presidents are members of the Hungarian family, Ersching.

Aracruz may refer to:

Comboios Biological Reserve is a biological reserve in the state of Espírito Santo, Brazil.

Fibria Celulose is a Brazilian pulp and paper company, created by a merger between Aracruz Celulose and Votorantim Celulose e Papel. The company has a production capacity exceeding six million tons of pulp and paper produced in seven factories distributed in five Brazilian states. Much of this production is exported. The company has many distributor centers around the world and five branch offices in São Paulo (Headquarters), Beijing, Csomád - Hungary, Hong Kong, Miami and Nyon, Switzerland.

João Manuel Dinis, commonly known as Comboio, is a Portuguese football defender playing for Omonia Aradippou. During his stay in Cyprus he played also for Doxa Katokopias, Aris Limassol and Elpida Xylofagou.

Esporte Clube Aracruz, commonly known as Aracruz, is a Brazilian football club based in Aracruz, Espírito Santo state. The club was formerly known as Esporte Clube Sauassu. They won the Campeonato Capixaba once.

The 2012 Campeonato Capixaba de Futebol was the 96th season of Espírito Santo's top professional football league. The competition began on January 21 and ended on May 5. Aracruz won the championship for the 1st time, while Colatina and Serra were relegated.

Roma is a station on the Green Line of the Lisbon Metro. The station is located on Avenida de Roma, near the intersection with Av. dos Estados Unidos da América, enabling access to the Roma-Areeiro railway station nearby. 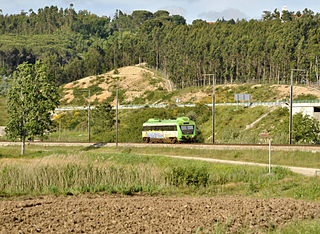 Ramal de Alfarelos is a railway branch in Portugal, which connects the Western Line to the Northern Line, offering a connection between Figueira da Foz and Coimbra.

Restauradores station is on the Blue Line of the Lisbon Metro.

Entre Campos station is part of the Yellow Line of the Lisbon Metro.

Linha do Algarve is a railway line in the Algarve, which connects the stations of Lagos and Vila Real de Santo António.

Ramal de Viana-Doca is a closed Portuguese railway branch line which connected the station of Viana do Castelo to the city's port. It was opened on 20 March 1924.