The contraguitar or Schrammel guitar is a type of guitar developed in Vienna in the mid-nineteenth century. In addition to the usual guitar neck with six strings and a fretboard, it has a second, fretless neck with up to nine bass strings. Customarily these additional strings are tuned from E-flat downwards. The lowest string on the 15-string contraguitar is usually tuned to G.

Viennese instrument maker Johann Gottfried Scherzer developed the instrument after 1848, improving on earlier, unfinished efforts by Johann Georg Stauffer (1778–1853), the master from whom Scherzer had learned his craft.

This page is mainly based on a translation of the German Wikipedia article, locatedhere. 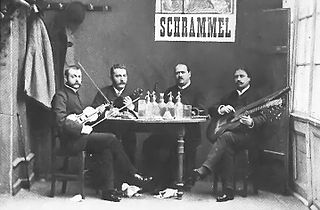 Schrammelmusik is a style of Viennese folk music originating in the late nineteenth century and still performed in present-day Austria. The style is named for the prolific folk composers Johann and Josef Schrammel.

The banjo is a four-, five-, or six-stringed instrument with a thin membrane stretched over a frame or cavity as a resonator, called the head, which is typically circular. The membrane is typically made of plastic, although animal skin is still occasionally used. Early forms of the instrument were fashioned by Africans in the United States, adapted from African instruments of similar design. The banjo is frequently associated with folk, Irish traditional, and country music. Banjo can also be used in some Rock Songs. Countless Rock bands, such as The Eagles, Led Zeppelin, and The Allman Brothers, have used the five-string banjo in some of their songs. Historically, the banjo occupied a central place in African-American traditional music and the folk culture of rural whites before entering the mainstream via the minstrel shows of the 19th century. The banjo, along with the fiddle, is a mainstay of American old-time music. It is also very frequently used in traditional ("trad") jazz.

The classical guitar is a member of the guitar family used in classical music. An acoustic wooden string instrument with strings made of gut or nylon, it is a precursor of the acoustic and electric guitars which use metal strings. The name guitar comes from Persian language, in which Tar means string. Tar is also the name of an Iranian instrument that could be the primary form of guitar. Classical guitars are derived from the Spanish vihuela and gittern in the fifteenth and sixteenth century, which later evolved into the seventeenth and eighteenth century Baroque guitar and later the modern classical guitar in the mid nineteenth century. 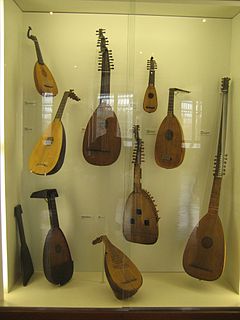 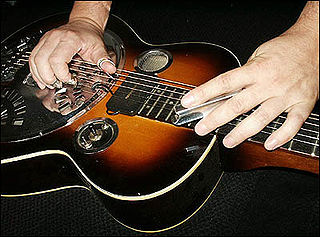 Steel guitar is a type of guitar or the method of playing the instrument. Developed in Hawaii by Joseph Kekuku in the late 19th and early 20th centuries, a steel guitar is usually positioned horizontally; strings are plucked with one hand, while the other hand changes the pitch of one or more strings with the use of a bar or slide called a steel. The earliest use of an electrified steel guitar was first made in the early 1930s by Bob Dunn of Milton Brown and His Brownies, a western swing band from Fort Worth, Texas; the instrument was perfected in the mid to late 1930s by Fort Worth's Leon McAuliffe, who played for western swing band Bob Wills and His Texas Playboys. Nashville later picked up the use of the steel guitar in the early days of the late 1940s and early 1950s "Honky Tonk" country & western music with a number of fine steel guitarists backing names like Hank Williams, Lefty Frizzell and Webb Pierce. The term steel guitar is often mistakenly used to describe any metal body resophonic guitar. 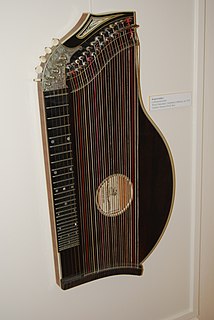 The 12-string guitar is a steel-string guitar with 12 strings in six courses, which produces a richer, more ringing tone than a standard six-string guitar. Typically, the strings of the lower four courses are tuned in octaves, with those of the upper two courses tuned in unisons. The gap between the strings within each dual-string course is narrow, and the strings of each course are fretted and plucked as a single unit. The neck is wider, to accommodate the extra strings, and is similar to the width of a classical guitar neck. The sound, particularly on acoustical instruments, is fuller and more harmonically resonant than six-string instruments. 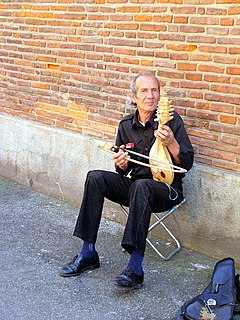 The gadulka is a traditional Bulgarian bowed string instrument. Alternate spellings are "gǎdulka", "gudulka" and "g'dulka". Its name comes from a root meaning "to make noise, hum or buzz". The gadulka is an integral part of Bulgarian traditional instrumental ensembles, commonly played in the context of dance music. 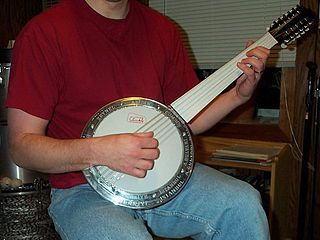 The cümbüş is a Turkish stringed instrument of relatively modern origin. It was developed in 1930 by Zeynel Abidin Cümbüş (1881–1947) as an oud-like instrument that could be heard as part of a larger ensemble. 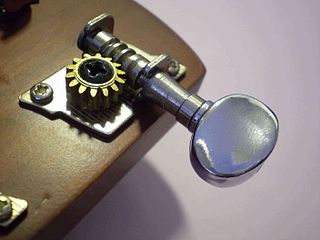 A machine head is a geared apparatus for tuning stringed musical instruments by adjusting string tension. Machine heads are used on mandolins, guitars, double basses, and others, and are usually located on the instrument's headstock. Other names for guitar tuners include pegs, gears, machines, cranks, knobs, tensioners, and tighteners.

The kobza, also called bandurka is a Ukrainian folk music instrument of the lute family, a relative of the Central European mandora. The term kobza however, has also been applied to a number of other Eastern European instruments distinct from the Ukrainian kobza.

Tamburica or Tamboura refers to a family of long-necked lutes popular in Southern Europe and Central Europe, especially Croatia, Bosnia and Herzegovina, Serbia, Slovenia, and Hungary. It is also known in Burgenland. All took their name and some characteristics from the Persian tanbur but also resemble the mandolin and guitar in the sense that its strings are plucked and often paired. The frets may be moveable to allow the playing of various modes. The variety of tamburica shapes known today were developed in Croatia and Serbia by a number of indigenous contributors near the end of the 19th century.

Vienna is the capital and largest city of Austria, and has long been one of the major centers for cultural development in central Europe.

The Combolin was invented by Roy Williamson of The Corries in the summer of 1969. The combolin combined several instruments into a single instrument. One combined a mandolin and a guitar, the other combined guitar and the Spanish bandurria, the latter being an instrument Williamson had played since the early days of the Corrie Folk Trio. 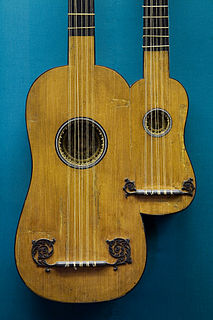