In quantum chemistry, electronic structure is the state of motion of electrons in an electrostatic field created by stationary nuclei. [1] The term encompasses both the wave functions of the electrons and the energies associated with them. Electronic structure is obtained by solving quantum mechanical equations for the aforementioned clamped-nuclei problem.

A number of methods to obtain electronic structures exist and their applicability varies from case to case. [2]

Computational chemistry is a branch of chemistry that uses computer simulation to assist in solving chemical problems. It uses methods of theoretical chemistry, incorporated into computer programs, to calculate the structures and properties of molecules, groups of molecules, and solids. It is essential because, apart from relatively recent results concerning the hydrogen molecular ion, the quantum many-body problem cannot be solved analytically, much less in closed form. While computational results normally complement the information obtained by chemical experiments, it can in some cases predict hitherto unobserved chemical phenomena. It is widely used in the design of new drugs and materials.

Quantum chemistry, also called molecular quantum mechanics, is a branch of physical chemistry focused on the application of quantum mechanics to chemical systems, particularly towards the quantum-mechanical calculation of electronic contributions to physical and chemical properties of molecules, materials, and solutions at the atomic level. These calculations include systematically applied approximations intended to make calculations computationally feasible while still capturing as much information about important contributions to the computed wave functions as well as to observable properties such as structures, spectra, and thermodynamic properties. Quantum chemistry is also concerned with the computation of quantum effects on molecular dynamics and chemical kinetics.

In quantum chemistry and molecular physics, the Born–Oppenheimer (BO) approximation is the best-known mathematical approximation in molecular dynamics. Specifically, it is the assumption that the wave functions of atomic nuclei and electrons in a molecule can be treated separately, based on the fact that the nuclei are much heavier than the electrons. The approach is named after Max Born and J. Robert Oppenheimer who proposed it in 1927, in the early period of quantum mechanics.

Computational physics is the study and implementation of numerical analysis to solve problems in physics for which a quantitative theory already exists. Historically, computational physics was the first application of modern computers in science, and is now a subset of computational science. It is sometimes regarded as a subdiscipline of theoretical physics, but others consider it an intermediate branch between theoretical and experimental physics - an area of study which supplements both theory and experiment.

Molecular dynamics (MD) is a computer simulation method for analyzing the physical movements of atoms and molecules. The atoms and molecules are allowed to interact for a fixed period of time, giving a view of the dynamic "evolution" of the system. In the most common version, the trajectories of atoms and molecules are determined by numerically solving Newton's equations of motion for a system of interacting particles, where forces between the particles and their potential energies are often calculated using interatomic potentials or molecular mechanics force fields. The method is applied mostly in chemical physics, materials science, and biophysics.

Coupled cluster (CC) is a numerical technique used for describing many-body systems. Its most common use is as one of several post-Hartree–Fock ab initio quantum chemistry methods in the field of computational chemistry, but it is also used in nuclear physics. Coupled cluster essentially takes the basic Hartree–Fock molecular orbital method and constructs multi-electron wavefunctions using the exponential cluster operator to account for electron correlation. Some of the most accurate calculations for small to medium-sized molecules use this method.

In computational physics and chemistry, the Hartree–Fock (HF) method is a method of approximation for the determination of the wave function and the energy of a quantum many-body system in a stationary state.

In molecular physics, the Pariser–Parr–Pople method applies semi-empirical quantum mechanical methods to the quantitative prediction of electronic structures and spectra, in molecules of interest in the field of organic chemistry. Previous methods existed—such as the Hückel method which led to Hückel's rule—but were limited in their scope, application and complexity, as is the Extended Hückel method.

Quantum Monte Carlo encompasses a large family of computational methods whose common aim is the study of complex quantum systems. One of the major goals of these approaches is to provide a reliable solution of the quantum many-body problem. The diverse flavors of quantum Monte Carlo approaches all share the common use of the Monte Carlo method to handle the multi-dimensional integrals that arise in the different formulations of the many-body problem.

Direct quantum chemistry covers a set of quantum chemical methods not using the Born–Oppenheimer representation. Direct quantum chemistry considers the motion of the nuclei and the electrons on the same time scales. The method therefore considers the molecular Hamiltonian as a whole without trying to solve separately the Schrödinger equation associated to the electronic molecular Hamiltonian. Though the method is non-adiabatic it is distinguishable from most non adiabatic methods for treating the molecular dynamics, which typically use the Born-Oppenheimer representation, but become non-adiabatic by considering vibronic coupling explicitly. Direct quantum chemistry is applied in the modelling of high-speed atomic collisions, where the nuclear motion may be comparable or faster than the electronic motion.

Jaguar is a computer software package used for ab initio quantum chemistry calculations for both gas and solution phases. It is commercial software marketed by the company Schrödinger. The program was originated in research groups of Richard Friesner and William Goddard and was initially called PS-GVB.

Ab initio quantum chemistry methods are computational chemistry methods based on quantum chemistry. The term ab initio was first used in quantum chemistry by Robert Parr and coworkers, including David Craig in a semiempirical study on the excited states of benzene. The background is described by Parr. Ab initio means "from first principles" or "from the beginning", implying that the only inputs into an ab initio calculation are physical constants. Ab initio quantum chemistry methods attempt to solve the electronic Schrödinger equation given the positions of the nuclei and the number of electrons in order to yield useful information such as electron densities, energies and other properties of the system. The ability to run these calculations has enabled theoretical chemists to solve a range of problems and their importance is highlighted by the awarding of the Nobel prize to John Pople and Walter Kohn.

Włodzimierz Kołos was a Polish chemist and physicist who was one of the founders of modern quantum chemistry, and pioneered accurate calculations on the electronic structure of molecules.

The dihydrogen cation or hydrogen molecular ion is a cation with formula H+
2. It consists of two hydrogen nuclei (protons) sharing a single electron. It is the simplest molecular ion. 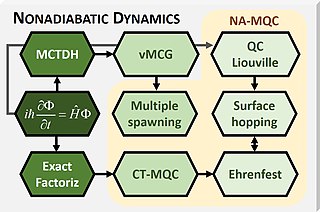 Mixed quantum-classical (MQC) dynamics is a class of computational theoretical chemistry methods tailored to simulate nonadiabatic (NA) processes in molecular and supramolecular chemistry. Such methods are characterized by: