Frank Gilliam attended high school in Steubenville, Ohio, and was football teammates with Calvin Jones and Eddie Vincent. Frank was nicknamed "Shag" because of the baggy pants he liked to wear. Gilliam and Vincent committed to play for the Iowa Hawkeyes, while Cal Jones committed to play for Ohio State. However, at the last minute, Jones switched his commitment and decided to accompany Gilliam and Vincent to Iowa City. [1] Gilliam, Vincent, and Jones became affectionately known as the "Steubenville Trio". [2]

As a sophomore in 1953, Frank Gilliam, who played the right end position, helped Iowa to an excellent season. Iowa’s final game of that season was against #1 Notre Dame in South Bend. With 2:06 remaining in the game, Gilliam made a diving catch in the end zone to give Iowa a 14-7 lead. [3] But Notre Dame completed a touchdown pass with six seconds to play to salvage a 14–14 tie, thanks in large part to an injury timeout that was granted when two Notre Dame players fell at the same time. [4] [5] The tie cost the Irish the #1 spot in the final AP Poll, dropping them to a distant #2. Iowa rocketed into the AP rankings, finishing the year ninth in the nation and garnering six first place votes. It was Iowa’s highest ranking since 1939. [6]

In 1954, Iowa finished with a 5-4 record. Before Gilliam’s senior season in 1955, he broke his leg and was forced to sit out for a year. Jones and Vincent played their senior seasons in 1955, with Cal Jones winning the Outland Trophy.

In Gilliam’s senior season of 1956, Iowa had a 9-1 record, winning the Big Ten and a trip to the Rose Bowl for the first time in school history. [7] Frank Gilliam was named a second team All-American after the season. The happy occasion was marred, however, by the discovery that Gilliam’s close friend, Cal Jones, had died in a plane crash in the mountains of western Canada during a howling windstorm. [8] Frank Gilliam’s final game with the Hawkeyes came in the 1957 Rose Bowl, where Iowa defeated Oregon State, 35-19.

Frank Gilliam left to play for Winnipeg Blue Bombers of the Canadian Football League for three seasons from 1957-1959. [9] After retiring from professional football, he was a teacher for a few years before becoming an assistant coach to Jerry Burns at the University of Iowa from 1966-1970. Gilliam then joined the Minnesota Vikings, where he was a scout and personnel man for over 36 years. [10] 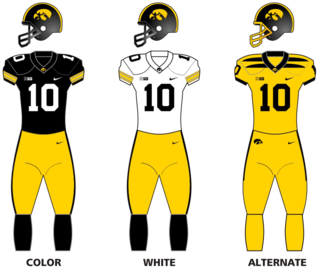 The Iowa Hawkeyes football program represents the University of Iowa in college football. The Hawkeyes compete in the West division of the Big Ten Conference. Iowa joined the Conference in 1899 and played their first Conference football season in 1900. They are a Division I Football Bowl Subdivision (FBS) member of the NCAA. The Hawkeyes play their home games in Iowa City, Iowa at Kinnick Stadium, with a capacity of 69,250. The Hawkeyes are coached by Kirk Ferentz, who is in his 21st season as the head coach and is the longest current tenured head coach in NCAA Division I FBS.

Jerome Monahan Burns is a former American football player and coach. He served as the head football coach at the University of Iowa, from 1961 to 1965, compiling record of 16–27–2, and for the Minnesota Vikings of the National Football League (NFL) from 1986 to 1991, tallying a mark of 52–43 in the regular season, and 3–3 in the postseason.

Howard Harding Jones was an American football player and coach who served as the head coach at Syracuse University (1908), Yale University, Ohio State University (1910), the University of Iowa (1916–1923), Duke University (1924) and the University of Southern California (1925–1940), compiling a career record of 194–64–21. His 1909 Yale team, 1921 Iowa team, and four of his USC teams won national championships. Jones coached USC in five Rose Bowls, winning all of them. Before coaching, Jones played football at Yale (1905–1907), where he played on three national title-winning teams. He was a member of the inaugural class of inductees into the College Football Hall of Fame as a coach in 1951; his younger brother Tad joined him as a member in 1958. 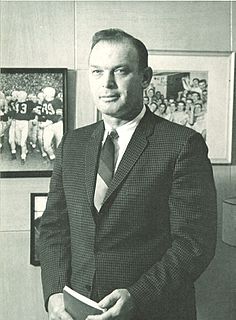 Forest "Evy" Evashevski was an American football player, coach, and college athletics administrator. He played college football at the University of Michigan from 1938 to 1940 and with the Iowa Pre-Flight Seahawks in 1942. 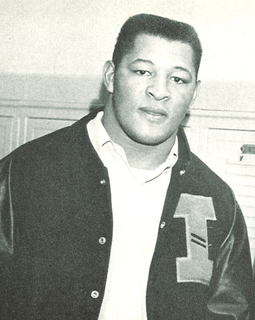 Calvin Jack Jones was a college football player for the University of Iowa. Jones is one of only two Iowa football players to have his jersey number retired by the school. Jones became the first Hawkeye, and the first African-American, to win the Outland Trophy in 1955. He played one year with the Winnipeg Blue Bombers of the Western Interprovincial Football Union. He died in a plane crash after playing in the East–West All-Star Game. 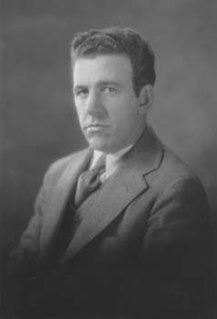 Edward Nicholas Anderson was an American football player and coach of football and basketball. He served as the head football coach at Columbia College in Dubuque, Iowa, now known as Loras College (1922–1924), DePaul University (1925–1931), the College of the Holy Cross, and the University of Iowa, compiling a career college football record of 201–128–15. Anderson was also the head basketball coach at DePaul from 1925 to 1929, tallying a mark of 25–21. Anderson played professional football in the National Football League (NFL) for the Rochester Jeffersons in 1922 and the Chicago Cardinals from 1922 to 1925. He was inducted into the College Football Hall of Fame as a coach in 1971.

The 1939 Iowa Hawkeyes football team represented the University of Iowa in the 1939 Big Ten Conference football season. The team, nicknamed the Ironmen, was coached by Eddie Anderson and was led on the field by halfback Nile Kinnick. 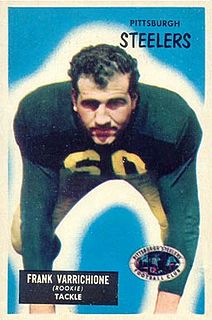 Frank Joseph Varrichione was an American athlete. Varrichione was best remembered for being part of the 1953 University of Notre Dame football team that shared the collegiate national championship with a 9-0-1 record and for having played eleven seasons in the National Football League (NFL).

The 1958 Iowa Hawkeyes football team represented the University of Iowa in the 1958 Big Ten Conference football season. The team was coached by Forest Evashevski and captained by fullback John Nocera. The Football Writers Association of America (FWAA) awarded the team the Grantland Rice Award, which is presented annually to the college football team adjudged by the FWAA to be national champion.

The 1921 Iowa Hawkeyes football team represented the University of Iowa in the 1921 Big Ten Conference football season. The team was coached by Howard Jones. In the opening game of the 2012 season, the Hawkeyes wore gold and black uniforms to honor the 1921 team against Iowa State. The team was retroactively selected as the 1921 national champion by the Billingsley Report and as a co-national champion by Parke H. Davis.

The 1922 Iowa Hawkeyes football team represented the University of Iowa in the 1922 Big Ten Conference football season. The team was coached by Howard Jones, was co-champion of the Big Ten Conference, and was retroactively selected as the 1922 national champion by the Billingsley Report.

Leroy Smith is a former college football player for the Iowa Hawkeyes from 1988 to 1991. He was a defensive lineman that was named a consensus first team All-American and the Big Ten's Defensive Player of the Year in 1991.