Galerella is a genus of the mongoose family (Herpestidae) native to Africa and commonly called the slender mongooses. [1]

There are four or five species in this genus, with more than 30 subspecies.

Four of the species have long been established: [1]

A recent addition is the black mongoose G. nigrata, which now is considered a separate species by many scientists, following genetic analysis. It was previously seen as a variant of Galerella sanguinea. [3] 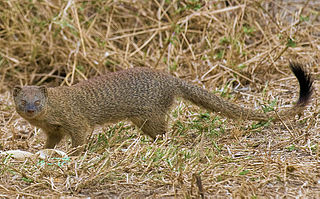 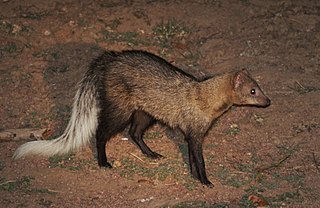 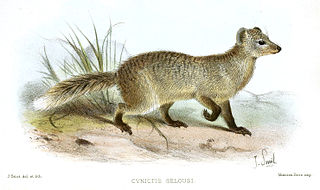 The black mongoose is a species of mongoose found in Namibia and Angola. Although originally described as a separate species by Thomas (1928), it has often been considered a subspecies of the slender mongoose. However, genetic analysis has confirmed its status as a separate species. Evidence suggests the two species diverged around four million years ago, likely due to some populations becoming separated as the habitat in southern Africa was changing. The black mongoose now occupies a distinct habitat in areas with large boulders and rocky outcrops known as inselbergs in the mountainous regions of northwest Namibia and southwest Angola. After remaining in these areas for millions of years, the black mongoose is highly specialized to survive in the harsh arid environment. 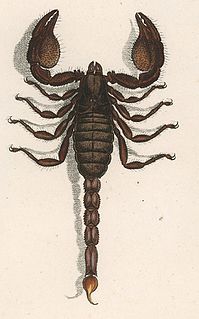 Opisthacanthus capensis is a Cape Province and Zimbabwean species of scorpion with robust chelae, dark brown to black in colour, turning green when under cover for some time. Opisthacanthus is arboreal and ground-dwelling, and found mainly in moist habitats in dense vegetation, pine plantations and forests, hiding under bark and rocks. There are 32 species and subspecies in this genus, all occurring in Southern Africa.