A golf handicap is a numerical measure of a golfer's potential that is used to enable players of varying abilities to compete against one another. Better players are those with the lowest handicaps.

The Qatar Masters is a European Tour golf tournament held at Doha Golf Club in Doha, Qatar. When founded in 1998, it was one of two European Tour events to be staged in the Arabian Peninsula, but is currently one of six. From 2005 to 2007 the tournament was co-sanctioned by the Asian Tour.

Mesaieed is an industrial city in Al Wakrah Municipality in the State of Qatar, approximately 36 kilometres (22 mi) south of Doha. It was one of the most important cities in Qatar during the 20th century, having gained in recognition as a prime industrial zone and tanking center for petroleum received from Dukhan.

The Philippines participated in the 2006 Asian Games held in Doha, Qatar; for the 15th straight time in the same number of stagings of the Games. The country did not participate in Men's and Women's Basketball for the first time due to the continuing suspension by International Basketball Federation.

Weightlifting was contested by both men and women at the 2006 Asian Games in Doha, Qatar from December 2 to December 6, 2006. There are seven weight categories for the women and eight for the men. All competition took place at the Banquet Hall, Al-Dana Club.

The Doha Golf Club in Doha, Qatar is an 18-hole, 7,374-yard, par 72 championship course that was designed by Peter Harradine. The Doha Golf Club is also one of the first grass golf course ever built in the Middle East. Open to nonmembers, it has a 2 808 yards long floodlit nine-hole academy course, and a clubhouse with three restaurants and a golf shop.

Iran participated in the 2006 Asian Games held in the city of Doha. This country is ranked 6th with 11 gold medals in this edition of the Asiad. 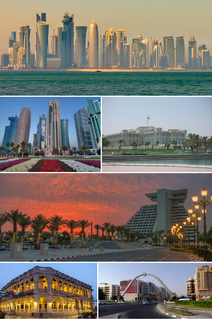 Doha is the capital and most populous city of the State of Qatar. It has a population of 956,460 (2015). The city is located on the coast of the Persian Gulf in the east of the country, North of Al Wakrah and South of Al Khor. It is Qatar's fastest growing city, with over 80% of the nation's population living in Doha or its surrounding suburbs, and it is the political and economic center of the country.

At the 2011 Pan Arab Games, the golf events were held at Doha Golf Club in Doha, Qatar from 11–16 December. A total of 4 events were contested.

The men's individual competition at the 2006 Asian Games in Doha was held from 8 December to 11 December at the Doha Golf Club. The men played at 7181 yards with a par 72.

The women's individual competition at the 2006 Asian Games in Doha was held from 8 December to 11 December at the Doha Golf Club. The Ladies played at 5751 yards with a par 73.

The women's team competition at the 2006 Asian Games in Doha was held from 8 December to 11 December at the Doha Golf Club. The Ladies played at 5751 yards with a par 73. 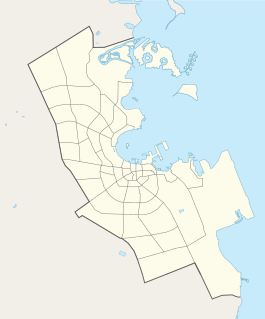 The 2019 WPA World Nine-ball Championship was a nine-ball pool championship, which took place from December 13 to 17, 2019 at the al-Arabi Sports Club in Doha, Qatar. The defending champion was Germany's Joshua Filler, who won the 2018 event defeating Carlo Biado in the final 13–10.