Hải Ninh may refer to: 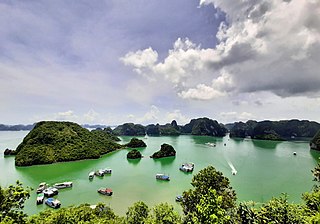 Móng Cái is a city of Quảng Ninh Province in northern Vietnam. Located on China–Vietnam border, it sits on the southern bank of Beilun River across Dongxing city of China's Guangxi Autonomous Region. It has a population of about 103,000. It is known as one of the wealthiest cities in Vietnam with the average income in some areas exceeding US$20,000 per family. One of these areas is the Trần Phú ward. 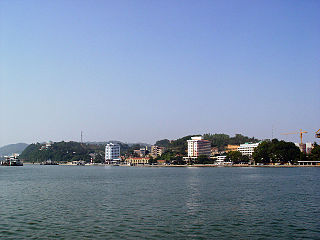 Hạ Long is the capital city and 1st-class provincial city of Quảng Ninh Province, Vietnam. The name Hạ Long means "descending dragon". The city was created in 1993, when the old capital, Hòn Gai, was merged with Bãi Cháy – the main tourist area. The city mainly lies on Hạ Long Bay. It is located at about 178 km (111 mi) east of Hanoi. The population in 2013 was 227,000.

Tân Bình may refer to several places in Vietnam, including:

Bắc Sơn may refer to several places in Vietnam: 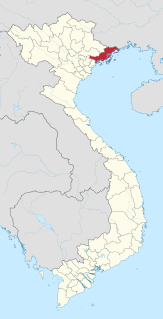 The Battle of Mong Cai was fought during the Sino-Vietnamese War between 16 February and 10 March 1979 over the city of Móng Cái and other districts of Quảng Ninh Province that bordered the People's Republic of China. The battle broke out as Chinese People's Liberation Army (PLA) units launched diversionary attacks in support of the Chinese invasion in the major fronts of Lạng Sơn, Cao Bằng and Lào Cai. However, the Chinese failed to attract any Vietnamese reinforcements into the battle.

Tân An is the capital city of Long An Province, Vietnam. Tân An may also refer to several other places in Vietnam, including:

Thanh Bình may refer to several places in Vietnam, including:

Cẩm Bình may refer to several places in Vietnam, including:

An Ninh may refer to several places in Vietnam, including:

Trần Phú was a Vietnamese revolutionary and the first general secretary of the Indochinese Communist Party. Several places in Vietnam are named after him: