From the IEEE CAS web site, the field of interest of the society is defined to be

"The theory, analysis, design (computer aided design), and practical implementation of circuits, and the application of circuit theoretic techniques to systems and to signal processing. The coverage of this field includes the spectrum of activities from, and including, basic scientific theory to industrial applications."

The Society organizes many conferences every year and operates local chapters around the world. It coordinates the operation of several councils, task forces, and technical committees.

The Circuits and Systems Society oversees the publication of eleven periodical magazines and scholarly journals: [3]

The Society organizes, sponsors, and co-sponsors many conferences every year (64 conferences in 2006). A list of them can be retrieved by the link: .

The IEEE Nuclear and Plasma Sciences Society (NPSS) is a transnational group of about 3000 professional engineers and scientists. The IEEE-affiliated Society sponsors five major annual, and 12 biennial conferences and symposia. It also sponsors or co-sponsor four peer-reviewed academic journals. 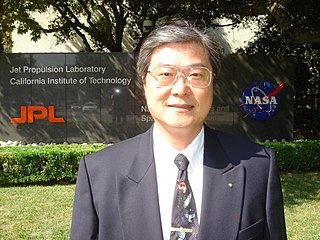 Wai-Chi Fang is a Taiwanese engineer.

The IEEE Components, Packaging and Manufacturing Technology (CPMT) is a professional society of the IEEE that deals with the advancement of microsystems packaging and manufacture.

The IEEE Computational Intelligence Society is a professional society of the Institute of Electrical and Electronics Engineers (IEEE) focussing on "the theory, design, application, and development of biologically and linguistically motivated computational paradigms emphasizing neural networks, connectionist systems, genetic algorithms, evolutionary programming, fuzzy systems, and hybrid intelligent systems in which these paradigms are contained".

The IEEE Education Society (EdSoc) is a society of the Institute of Electrical and Electronics Engineers (IEEE) that is focused on the theory and practice of education and educational technology needed to deliver effectively domain knowledge in the fields of interest of IEEE. The society is an international organization concerned with state-of-the-art information and resources related to engineering education and with professional development within academia and industry. Membership is open to professionals in an IEEE-designated field as evidenced by educational background or by experience as well as to students who are pursuing undergraduate or graduate education in an IEEE-related field.

The IEEE Electron Devices Society is a professional society of the IEEE.

The IEEE Robotics and Automation Society is a professional society of the IEEE that supports the development and the exchange of scientific knowledge in the fields of robotics and automation, including applied and theoretical issues.

The IEEE Systems, Man, and Cybernetics Society is a professional society of the IEEE. It aims "to serve the interests of its members and the community at large by promoting the theory, practice, and interdisciplinary aspects of systems science and engineering, human-machine systems, and cybernetics".

The IEEE Nanotechnology Council is one of seven councils of the IEEE.

IEEE Life Sciences is an initiative launched by IEEE to promote the advancement of life sciences and supporting technologies, and to provide expertise and resources to individuals and enterprises involved in the various disciplines falling under the life sciences umbrella. IEEE Life Sciences provides access to a range of resources, including professional conferences, continuing education courses, publications, and standards. It is based in Piscataway, New Jersey.

Yehia Massoud is the Dean of the School of Systems and Enterprises at Stevens Institute of Technology. As the dean of school, SSE has seen a record increase in research awards and peer-reviewed publications, as well as a significant increase in student enrollment. The school also improved its U.S. News & World Report graduate school rankings by six positions, from #39 to #33. He was named Fellow of the Institute of Electrical and Electronics Engineers (IEEE) in 2015 for contributions to the modeling and design of nanoscale interconnects. Massoud has had significant progressive academic leadership and has been involved in forging and building effective partnerships with numerous academic and industrial institutions, and international organizations, and governmental funding agencies.