The Inglis Barracks bombing was a bomb attack carried out by the Provisional Irish Republican Army (IRA) on 1 August 1988 on a British Army barracks called Inglis Barracks in Mill Hill, London. The attack killed one soldier, injured nine more and destroyed large parts of the barracks. [1] It was the first IRA attack in England since the 1984 Brighton Bombing. [2]

The Provisional IRA had carried out sustained bombing campaigns in England before, between 1973 and 1976 [3] [4] carrying out hundreds of bombings in the process killing over 60 people and injuring over 1,000. The IRA carried out sporadic attacks in England between 1977 and 1984. The bombing at Inglis barracks commenced a new sustained bombing campaign that would last until the 1994 IRA ceasefire. [5]

The living quarters of the barracks were demolished by the blast, which killed L/Cpl Michael Robbins from the Royal Engineers. [6] A construction worker who was working inside the barracks, said the middle section was obliterated. The roof of the two-story red brick building was blown off. [7] One soldier was rescued alive after he was trapped beneath the debris for thirty minutes. He was saved by a radiator that fell across him and shielded him from falling masonry. Fires raged for three hours as rescuers pulled the injured from heaps of rubble and smoldering timber.

The IRA issued a statement the next day in London and Dublin claiming responsibility for the bombing and said more attacks in England would follow.

On 27 August 1975 a Provisional IRA bomb exploded without warning at the Caterham Arms public house in Caterham, Surrey, England. There were no fatalities but 33 people were injured, some severely. Two off-duty soldiers lost their legs as a result of the bombing.

The 1987 Rheindahlen bombing was a car bomb attack on 23 March 1987 at JHQ Rheindahlen military barracks, the British Army headquarters in West Germany, injuring thirty-one. The large 300 lb (140 kg) car bomb exploded near the visitors officers' mess of the barracks. The Provisional IRA later stated it had carried out the bombing. It was the start of the IRA's campaign on mainland Europe from the late 1980s to the early 1990s. Although British soldiers were targeted, most of the injured were actually German officers and their wives.

The 1994 Heathrow mortar attacks were a series of homemade mortar bomb attacks targeted at Heathrow Airport carried out by the Provisional IRA. Over a five-day period, Heathrow was targeted three times by the IRA, which fired 12 mortar rounds. Heathrow was a symbolic target due to its importance to the United Kingdom's economy, and much disruption was caused when areas of the airport were closed over the period due to the IRA attacks. The gravity of the incident was heightened by the fact that Queen Elizabeth II was being flown back to Heathrow by the RAF on 10 March.

The Provisional IRA's Balcombe Street Gang was a Provisional IRA active service unit (ASU) who carried out a bombing campaign in southern England in the mid 1970s. The vast majority of their attacks and attempted attacks took place in London and the rest in Surrey, Hampshire and Wiltshire. Between October 1974 and December 1975 they carried out approximately 40 bomb and gun attacks in and around London, sometimes attacking the same targets twice. The unit would sometimes carry out two or more attacks in one day; on the 27 January 1975 they placed seven time bombs in London. On 25 November 1974, they carried out three bomb attacks in the centre of London injuring 20 people. They were eventually caught during the Balcombe Street siege in December 1975, thus ending their 15-month bombing campaign in England. They have been described as "the most violent, ruthless and highly-trained unit ever sent to Britain by the Provisional IRA".

The Lichfield gun attack was an ambush carried out by the Provisional IRA (IRA) on 1 June 1990 against three off-duty British soldiers who were waiting at Lichfield City railway station in Staffordshire. The attack resulted in one soldier being killed and two others badly wounded. On the same day a British Army major was killed by the IRA in a gun attack outside his house in Dortmund, Germany.

On Friday 28 February 1992, the Provisional IRA (IRA) exploded a bomb inside London Bridge station during the morning rush hour, causing extensive damage and wounding 29 people. A day later, a device exploded at the Crown Prosecution Service in London, injuring a further two people.

On 9 April 1990 the Provisional IRA (IRA) detonated a massive IED roadside bomb under an Ulster Defence Regiment (UDR) mobile patrol which killed four members of the UDR. It was the worst attack against the UDR since seven years previously when, in July 1983, four soldiers of the same regiment were killed in a similar attack near Ballygawley. It was also one of the worst attacks against the security forces in County Down since the Warrenpoint Ambush of August 1979 when 18 British soldiers were killed and six injured. 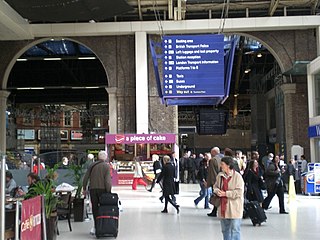 On 18 February 1991 the Provisional IRA (PIRA) exploded two bombs at London mainline stations, one at Victoria station and the other at Paddington station, killing one person and injuring 38 other people all at Victoria station. It was the IRA's second major attack in London in February 1991 after the Downing Street mortar attack eleven days earlier which was an attempt to wipe out the British War cabinet and the British prime minister John Major. It was also the first IRA attack against a civilian target in England since the 1983 Harrods bombing, marking a strategic change in their bombing campaign in England.

On 25 and 27 November 1974 a London-based Provisional IRA unit placed several bombs in pillar boxes and one in a hedge behind a pillar box. This was a new tactic used by the IRA in England, although a similar tactic had been used in Northern Ireland during The Troubles several times previously. 40 people were wounded from five explosions in several districts.

The Burning of the Burning Embers pub was an early military operation carried out by the Provisional IRA's Belfast Brigade (PIRA). The Burning Embers was used as a base by the Official IRA (OIRA), the Provisional IRA also hoped to burn down the Cracked Cup which was another pub owned by the OIRA along the Falls Road on Leeson Street but the OIRA got information that the PIRA was coming and a gun battle broke out.

The Central Bar bombing was a bomb attack on a pub in the mainly Protestant town of Gilford near Portadown in County Down in Northern Ireland on 31 December 1975. The attack was carried out by members of the Irish National Liberation Army (INLA) using the covername "People's Republican Army". Three Protestant civilians were killed in the bombing.

The Official IRA's Belfast Brigade was founded in December 1969 after the Official IRA itself emerged in December 1969, shortly after the beginning of the Troubles, when the Irish Republican Army split into two factions. The other was the Provisional IRA. The "Officials" were Marxist-Leninists and worked to form a united front with other Irish communist groups, named the Irish National Liberation Front (NLF). The Brigade like the pre-split IRA brigade before the split had three battalions, one in West Belfast, one in North Belfast and the Third in East Belfast. The Belfast Brigade was involved in most of the biggest early confrontations of the conflict like the Falls Curfew in 1970, the battles that followed after the introduction of Internment without trial in 1971 and Volunteers joined forces with the Provisional brigade to fight the British Army and UVF during the Battle at Springmartin in 1972. The first Commanding Officer (CO) of the brigade was veteran Billy McMillen who fought during the IRA Border Campaign. Shortly after the death of Official IRA Belfast "Staff Captain" Joe McCann in April 1972, the battalion structure of the brigade was done away with and command centralized under McMillen.

Roy Walsh was a former Provisional IRA volunteer. He was convicted for his part in the IRA's 1973 Old Bailey bombing which injured over 200 people and one person died from a heart attack due to the bombing.

The Chelsea Barracks bombing was a remote controlled nail bomb attack carried out by a London-based Active Service Unit of the Provisional IRA on 10 October 1981. The bomb targeted a bus carrying British Army soldiers just outside Chelsea Barracks. The blast killed two civilians and injured 40 people.

The Clive Barracks bombing was a bomb attack carried out by the Provisional Irish Republican Army on 20 February 1989 on a British Army barracks called Clive Barracks at Ternhill, Shropshire. The attack injured two soldiers from the Parachute Regiment, and destroyed a large part of the barracks.

The Red Lion Pub bombing was a bomb attack that happened on 2 November 1971, when a bomb planted by the Provisional IRA's Belfast Brigade exploded in the Red Lion pub in Belfast which killed three people and injured about 30 others.