Jennifer Watson CBE (born 25 January 1964), [1] better known as Jenny Watson, is the former chairperson of the United Kingdom Electoral Commission. She is Chair of the House of St Barnabas, of GAMSTOP and of Mossbourne Parkside Academy, a Hackney primary school, part of the Mossbourne Federation. She is also Chair of the Independent Complaints Panel at the Portman Group, the UK alcohol regulator, overseeing complaints into the naming, packaging, promotion and sponsorship of alcoholic drinks in the UK. [2] She is a non-executive director at the Financial Reporting Council, the Financial Ombudsman Service, and the Reclaim Fund.

Watson was the last chair of the Equal Opportunities Commission before the creation of the Commission for Equality and Human Rights, [3] having been first appointed as a commissioner in 1999, and deputy chair from 2000. She was deputy chairman of the Banking Code Standards Board, and of the Committee on Radioactive Waste Management. [3] A long term campaigner for women's rights, she had a 20+ year career in the not for profit sector. She started out at Liberty, [3] and then political campaigners Charter88, before moving to Victim Support. She is a former Chair of the Fawcett Society, a not-for-profit organisation campaigning for equality between women and men. [3]

Watson was appointed the second chair of the Electoral Commission in January 2009. [3] She was paid £100,000 for a role which required her to work three days a week. [4] Watson remained chair of the electoral commission amidst criticism of her management of the 2010 United Kingdom general election, when she defended herself on the grounds that the Electoral Commission had few powers over returning officers. Since then, the Parliamentary Voting System and Constituencies Act 2011 has increased the Commission's authority with regard to referendums. She formally announced the results of the Welsh devolution referendum "in both English and Welsh with perfect pronunciation". Just two months later, she acted as Chief Counting Officer (CCO) in the 2011 AV Referendum and also acted in the same capacity in the 2016 EU Referendum. In doing so, she became the first person to oversee two UK-wide referendums as Chief Counting Officer. [5]

Watson was appointed Commander of the Order of the British Empire (CBE) in the 2017 Birthday Honours for services to electoral democracy. [6] 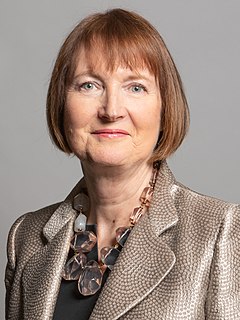 Harriet Ruth Harman is a British solicitor and Labour politician serving as a Member of Parliament (MP) since 1982, first for Peckham and then its successor constituency of Camberwell and Peckham since 1997. Harman holds the record as the longest-ever continuously serving female MP in the House of Commons. On 13 June 2017, she was dubbed "Mother of the House" by the then Prime Minister Theresa May.

Thomas Anthony Watson is a British politician who served as Deputy Leader of the Labour Party from 2015 to 2019 and Shadow Secretary of State for Digital, Culture, Media and Sport from 2016 to 2019. A member of the Labour Party, he was Member of Parliament (MP) for West Bromwich East from 2001 to 2019 and Minister for Digital Engagement and Civil Service Issues at the Cabinet Office from 2008 to 2009. 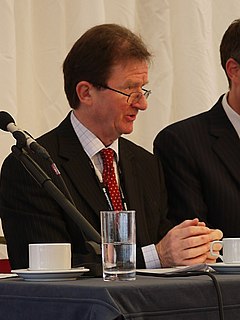 James Samuel Younger is a British media and charity manager.

The Electoral Commission is the election commission of the United Kingdom. It is an independent body, created in 2001 as a result of the Political Parties, Elections and Referendums Act 2000. It regulates party and election finance and sets standards for how elections should be run.

Angela Margaret Mason is a British civil servant and activist, and a former director of the UK-based lesbian, gay, bisexual and transgender lobbying organisation Stonewall. She is currently the Chair of the Fawcett Society, a UK women's rights campaigning organisation and a Labour Party councillor in Camden.

The Equal Opportunities Commission (EOC) was an independent non-departmental public body, (NDPB) in the United Kingdom, which tackled sex discrimination and promoted gender equality. Its last chair was Jenny Watson.

Dame Anne Elizabeth Owers, was Her Majesty's Chief Inspector of Prisons. Owers was the fifth holder of the post, appointed in August 2001, succeeding David Ramsbotham. Her appointment was renewed in June 2006 and in March 2008. She was appointed as the first National chair the Independent Monitoring Boards in October 2017. She was chair of the Independent Police Complaints Commission, and prior to this, she directed JUSTICE, the UK-based human rights and law reform organisation. 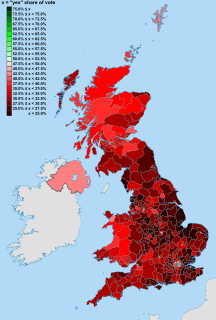 In the United Kingdom, the Alternative Vote referendum also known as the UK-wide referendum on the Parliamentary voting system was a referendum that took place on 5 May 2011, on whether to change the system for electing the House of Commons, the lower house of the national Parliament at Westminster. In the result of a Yes vote, future United Kingdom general elections would have used the "Alternative Vote" (AV); in the event of a No vote, the voting system would remain the same, with the UK continuing to use the "First Past the Post" (FPTP) voting system. The votes cast in the referendum were first counted in each of 440 districts or electoral divisions across the country, which were then combined and declared at a regional level.

Matthew Jim Elliott FRSA is a British political strategist and lobbyist who has served as the chief executive of a number of organisations and been involved in various successful referendum campaigns, including Vote Leave.

The European Union Referendum Act 2015 is an Act of the Parliament of the United Kingdom that made legal provision for a consultative referendum to be held in the United Kingdom and Gibraltar, on whether it should remain a member state of the European Union or leave it. The Bill was introduced to the House of Commons by Philip Hammond, Foreign Secretary on 28 May 2015. Two weeks later, the second reading of the Bill was supported by MPs from all parties except the SNP; the Bill subsequently passed on its third reading in the Commons on 7 September 2015. It was approved by the House of Lords on 14 December 2015, and given Royal Assent on 17 December 2015. The Act came partly into force on the same day and came into full legal force on 1 February 2016. 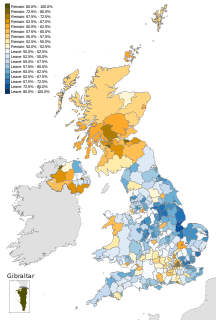 The 2016 United Kingdom European Union membership referendum took place in the United Kingdom and Gibraltar on 23 June 2016. Membership of the European Union had been a topic of debate in the United Kingdom since the country joined the European Communities in 1973. This referendum was conducted very differently from the European Communities membership referendum in 1975; a more localised and regionalised counting procedure was used, and the ballot was overseen by the Electoral Commission, a public body which did not exist at the time of the first vote. This article lists, by voting area for Great Britain and Gibraltar and by parliamentary constituency for Northern Ireland, all the results of the referendum, each ordered into national and regional sections.