Jordan (died 12 August 1127), count of Ariano (from 1102), was a petty baron in Apulia during the reign of the Duke William II. He was the son and successor of Count Eribert and Altrude of Buonalbergo. 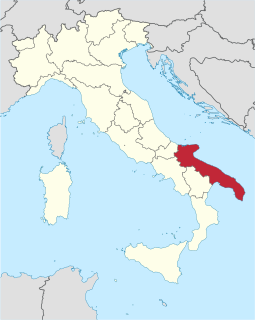 Apulia is a region in Southern Italy bordering the Adriatic Sea to the east, the Ionian Sea to the southeast, and the Strait of Otranto and Gulf of Taranto to the south. The region comprises 19,345 square kilometers (7,469 sq mi), and its population is about four million.

William II was the Duke of Apulia and Calabria from 1111 to 1127. He was the son and successor of Roger Borsa. His mother, Adela of Flanders, had previously been queen of Denmark, and he was a half-brother of Charles the Good.

In 1114, he and Robert I of Capua assaulted Benevento, but the Archbishop Landulf II made peace with them.

Robert I, count of Aversa and prince of Capua from 1106, on the death of his elder and heirless brother Richard, was the second eldest son of Jordan I of Capua and Gaitelgrima, daughter of Guaimar IV of Salerno.

Benevento is a city and comune of Campania, Italy, capital of the province of Benevento, 50 kilometres (31 mi) northeast of Naples. It is situated on a hill 130 metres above sea level at the confluence of the Calore Irpino and the Sabato. It is also the seat of a Roman Catholic archbishop. Around Benevento there is an urban area with 110,000 inhabitants.

He rebelled against the duke and, at Nusco in 1121, he took a troop of knights to threaten and insult the duke, saying, according to Falco of Benevento, "I will cut your coat short for you." The contumacious vassal then plundered the entire district. William begged assistance from the more powerful Roger II of Sicily, who, in exchange for all Calabria and the duke's halves of Palermo and Messina, crossed the straits and subjugated the count of Ariano. When Jordan died, his young son was put under the suzerainty of his neighbour, Count Ranulf of Alife.

Nusco is a town and comune in the province of Avellino in the south of Italy, east of Naples, with c. 4,100 inhabitants. It is situated in the mountains between the valleys of the Calore Irpino and Ofanto Rivers.

Falco of Benevento was an Italian twelfth-century historian, notary and scribe in the papal palace in Benevento, his native city, where he was born to high-standing parents. 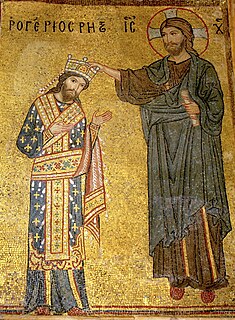 Roger II was King of Sicily, son of Roger I of Sicily and successor to his brother Simon. He began his rule as Count of Sicily in 1105, became Duke of Apulia and Calabria in 1127, and then King of Sicily in 1130. By the time of his death at the age of 58, Roger had succeeded in uniting all the Norman conquests in Italy into one kingdom with a strong centralized government.

Roger Borsa was the Norman Duke of Apulia and Calabria and effective ruler of southern Italy from 1085 until his death. He was the son of Robert Guiscard, the conqueror of southern Italy and Sicily; Roger was not as adept as his father, and most of his reign was spent in feudal anarchy. 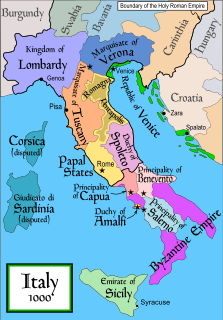 Guaimar IV was Prince of Salerno (1027–1052), Duke of Amalfi (1039–1052), Duke of Gaeta (1040–1041), and Prince of Capua (1038–1047) in Southern Italy over the period from 1027 to 1052. He was an important figure in the final phase of Byzantine authority in the Mezzogiorno and the commencement of Norman power. He was, according to Amatus of Montecassino, "more courageous than his father, more generous and more courteous; indeed he possessed all the qualities a layman should have—except that he took an excessive delight in women."

Jordan I, count of Aversa and prince of Capua from 1078 to his death, was the eldest son and successor of Prince Richard I of Capua and Fressenda, a daughter of Tancred of Hauteville and his second wife, also named Fressenda, and the nephew of Robert Guiscard, duke of Apulia, Calabria, and Sicily. He, according to William of Apulia, "equalled in his virtues both the duke and his father."

Gaitelgrima is a Lombard feminine name. There are several notable Gaitelgrimas in history. The identities of these five women are often confused because they were all closely related to each other and to two men: Guaimar III of Salerno and his son, Guaimar IV; they were the princes of Salerno from about 983 to 1027 and from 1027 to 1052. 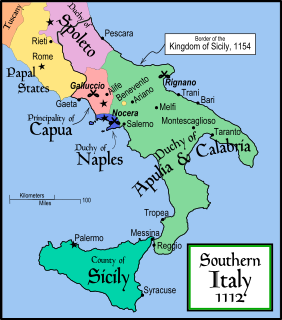 Robert II was the count of Aversa and the prince of Capua from 1127 until his death.

Alfonso, also called Anfuso or Anfusus, was the Prince of Capua from 1135 and Duke of Naples from 1139. He was an Italian-born Norman of the noble Hauteville family. After 1130, when his father Roger became King of Sicily, he was the third in line to the throne; second in line after the death of an older brother in 1138. He was the first Hauteville prince of Capua after his father conquered the principality from the rival Norman Drengot family. He was also the first Norman duke of Naples after the duchy fell vacant on the death of the last Greek duke. He also expanded his family's power northwards, claiming lands also claimed by the Papacy, although he was technically a vassal of the Pope for his principality of Capua.

Ranulf II was the count of Alife and Caiazzo, and duke of Apulia. He was a member of the Italo-Norman Drengot family which dominated the Principality of Capua for most of the century between 1050 and 1150. Ranulf's wife, Matilda, was the sister of King Roger II of Sicily.

The Hauteville was a Norman family originally of seigneurial rank from the Cotentin. The Hautevilles rose to prominence through their part in the Norman conquest of southern Italy. By 1130, one of their number, Roger II, was made the first King of Sicily. His male-line descendants ruled Sicily until 1194. Some Italian Hautevilles took part in the First Crusade and the founding of the Principality of Antioch (1098).

The Principality of Capua was a Lombard state centred on Capua in Southern Italy, usually de facto independent, but under the varying suzerainty of Western and Eastern Roman Empires. It was originally a gastaldate, then a county, within the principality of Salerno.

Landulf II was the Archbishop of Benevento from 8 November 1108 to his death. He succeeded Roffredo more than a year after the latter's death on 9 September 1107. The main source for his eventful reign is the contemporary chronicler and fellow Lombard and Benventan Falco.

The Norman conquest of southern Italy lasted from 999 to 1139, involving many battles and independent conquerors. In 1130 these territories in southern Italy united as the Kingdom of Sicily, which included the island of Sicily, the southern third of the Italian Peninsula, the archipelago of Malta and parts of North Africa.

The County of Sicily, also known as County of Sicily and Calabria, was a Norman state comprising the islands of Sicily and Malta and part of Calabria from 1071 until 1130. The county began to form during the Christian reconquest of Sicily (1061–91) from the Muslim Emirate, established by conquest in 965. The county is thus a transitional period in the history of Sicily. After the Muslims had been defeated and either forced out or incorporated into the Norman military, a further period of transition took place for the county and the Sicilians. 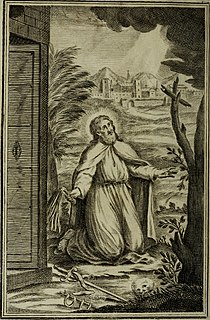 Ottone Frangipane, also known as Saint Ottone, was a Benedictine monk and a hermit. In Italian Roman Catholic theology he is patron saint of Ariano Irpino and the diocese of Ariano Irpino-Lacedonia.