K. Rajagopal may refer to:

Devasuram is a 1993 Indian Malayalam-language drama film directed by I. V. Sasi and written by Ranjith. It stars Mohanlal, Revathi, and Napoleon, with Innocent, V. K. Sreeraman, Maniyanpilla Raju, and Augustine in supporting roles. The songs featured in the film were composed by M. G. Radhakrishnan, while S. P. Venkatesh composed the background score.

Venkatesh is a given name and family name from the Indian subcontinent derived from Venkateswara, a Hindu deity.

Rajagopal or Raja Gopal is a common name in India. Notable persons with that name include:

Datuk K. Rajagobal is a Malaysian football manager and former player. He is the former head coach for Malaysia national football team and the under-23 football team.

Heera Rajagopal is a former Indian film actress from 1991 to 1999. She has appeared in several Tamil, Malayalam, Telugu, Kannada and Hindi films.

Annaiyin Aanai is a Tamil language drama film starring Sivaji Ganesan, Savitri and Pandari Bai in the lead roles. The film, directed by Ch. Narayana Murthy, had musical score by S. M. Subbaiah Naidu and was released on 4 July 1958. The film won the National Film Award for Best Feature Film in Tamil in 1959.

Manoj is a name of Indian origin. Notable people called Manoj include: 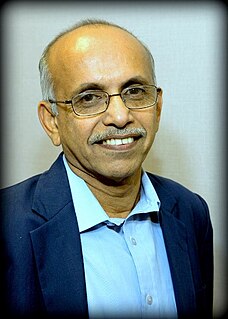 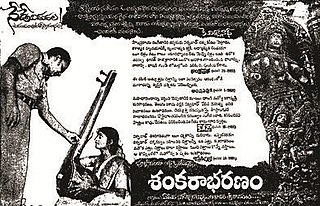 Sankarabharanam is a 1980 Indian Telugu-language musical drama film written and directed by K. Viswanath. Produced by Edida Nageswara Rao under the production company Poornodaya Movie Creations, Sankarabharanam starred J. V. Somayajulu, Manju Bhargavi, Chandramohan and Rajyalakshmi. The soundtrack was composed by K. V. Mahadevan and remained a chartbuster. The film throws light on the chasm between Classical and Western Music based on the perspective of people from two different generations.

K. Rajagopal is a Singaporean film director and screenwriter. He co-wrote and directed the social drama film A Yellow Bird, which was selected to be screened at the International Critics' Week, 2016 Cannes Film Festival. 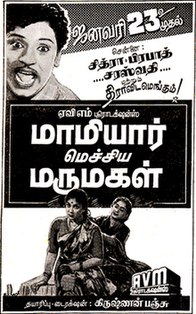 Mamiyar Mechina Marumagal is an Indian Tamil language film produced by AVM Productions with S. S. Rajendran, M. N. Rajam and G. Varalakshmi in the lead roles. The film was released in 23 January 1959. It is a remake of the Marathi film Ganget Ghode Nhahale (1955). This movie failed at the box office.

Engal Selvi is a 1960 Tamil language drama film, produced by T. E. Vasudevan under the Associate Producers banner and directed by D. Yoganand. It stars Akkineni Nageswara Rao and Anjali Devi in the lead roles, with music composed by K. V. Mahadevan. The film was a remake of Hindi film Lajwanti. The film was dubbed into Telugu as Kanna Kuthuru (1960).

M. A. Thirumugam is an Indian film director. He is the younger brother of film producer Sandow M. M. A. Chinnappa Thevar. 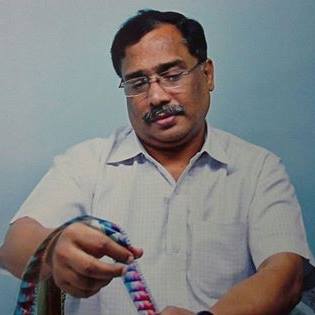 V. R. Rajagopal, known professionally as Kuladeivam Rajagopal, was an Indian film and stage actor who worked predominantly in the Tamil movie industry. He was a popular comedian in the Tamil film industry in 1950s and 1960s. He made his debut in 'Kaveri' n 1955. He acted in more than 200 films in five decades. Rajagopal got a title 'Chinna Kalaivanar' Madurai fans presented to him in 1961. He was an admirer of 'Kalaivanar' N. S. Krishnan.