The King's Medal of Merit (Norwegian: Kongens fortjenstmedalje) is a Norwegian award. It was instituted in 1908 to reward meritorious achievements in the fields of art, science, business, and public service. It is divided in two classes: gold and silver. The medal in gold is rewarded for extraordinary achievements of importance to the nation and society. The medal in silver may be awarded for lesser achievements. The medal is suspended from a ribbon in the colours of the Royal Standard of Norway. [1]

Design of the Medal

The Order of the House of Orange, sometimes referred to as the House Order of Orange, is a dynastic order of the House of Orange-Nassau, the royal family of the Netherlands similar to the Royal Victorian Order in the United Kingdom. The order was instituted by Queen Wilhelmina of the Netherlands on 19 March 1905 and is not subject to ministerial responsibility or influence, but is awarded at the discretion of the Dutch monarch alone.

The Volunteer Officers' Decoration, post-nominal letters VD, was instituted in 1892 as an award for long and meritorious service by officers of the United Kingdom's Volunteer Force. Award of the decoration was discontinued in the United Kingdom when it was superseded by the Territorial Decoration in 1908, but it continued to be awarded in some Crown Dependencies until 1930. 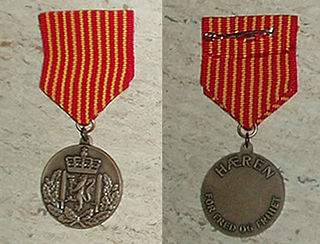 This is a list of Norwegian orders and medals, in order of precedence. This list contains all medals approved for wearing on a Norwegian military uniform in ranked order. 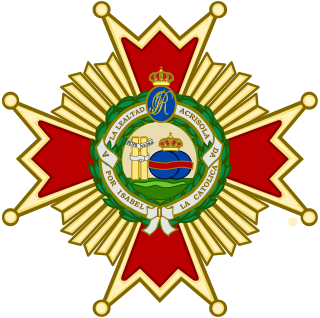 The Order of Isabella the Catholic is a Spanish civil order in which membership is granted in recognition of services that benefit the country. The Order is not open to Spaniards exclusively, and it has been used to award many foreigners.

Per Tønder was a Norwegian priest and politician for the Labour Party.

The Orders, decorations, and medals of Sweden have a historical basis, reaching back to the 1606 founding of the extinct Jehova Order. The Royal Order of Knights of Sweden were only truly codified in the 18th century, with their formal foundation in 1748 by Frederick I of Sweden. Significant reforms in 1974 changed the conditions and criteria under which many orders and decorations could be awarded.

Per Hurum was a Norwegian sculptor.

H.M. The King’s Commemorative Medal is a royal decoration of Norway. Established in 1906 by King Haakon VII, the medal is awarded to individuals for particularly meritorious service to the King. The medal is awarded in grades, gold and silver. The gold medal ranks 28th in the Norwegian order of wear just below the Antarctic Medal and above The Royal House Centenary Medal. The silver medal ranks 38th in the order of precedence below the King Olav V's 100th Anniversary Medal and above the Defence Service Medal.