Last updated January 26, 2020
This list is incomplete; you can help by expanding it.

The following article shows a List of caves in France : 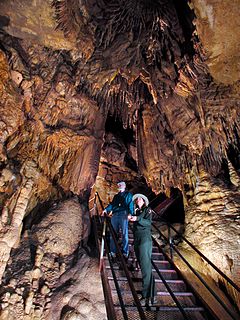 A show cave — also called tourist cave, public cave, and in the United States, commercial cave — is a cave which has been made accessible to the public for guided visits.

Gouffre Jean-Bernard or Réseau Jean Bernard, sometimes known simply as Jean Bernard, is one of the deepest caves known in the world. It is in the Alps in Samoëns, France. The first entrance to the cave was found by the French caving group Groupe Vulcain in 1963. More entrances have been found over the years since, and currently at least thirteen are known. The highest entrance, known as C37, is at 2,274 m (7,461 ft) above sea level. The cave is named after Jean Dupont and Bernard Raffy, two Groupe Vulcain members who died in 1963 in an unrelated expedition.

Édouard-Alfred Martel, the 'father of modern speleology', was a world pioneer of cave exploration, study, and documentation. Martel explored thousands of caves in his native France and many other countries, popularised the pursuit of cave exploration, introduced the concept of speleology as a distinct area of scientific study, maintained an extensive archive, and in 1895 founded Société de Spéléologie, the first organisation devoted to cave science in the world.

The Gouffre Berger is a French cave discovered on 24 May 1953 by Joseph Berger, Bouvet, Ruiz de Arcaute and Marc Jouffray. From 1953 to 1963, it was regarded as the deepest cave in the world at −1,122 metres (−3,681 ft), relinquishing this title to the previous contender, Pierre Saint Martin, in 1964, after further exploration. The Gouffre Berger is now ranked 28th deepest cave in the world, and the 4th in France.

La Balme-les-Grottes is a commune in the Isère department in the Auvergne-Rhône-Alpes region of south-eastern France.

The Dent de Crolles is a karstic mountain of the Chartreuse Mountains range, 17 kilometres north east of Grenoble, Isère, France. It has a characteristic "tooth-like" profile and is easily recognizable in the Isère Valley (Grésivaudan) in the Grenoble area. Its name is derived from the town of Crolles, located next to the mountain. 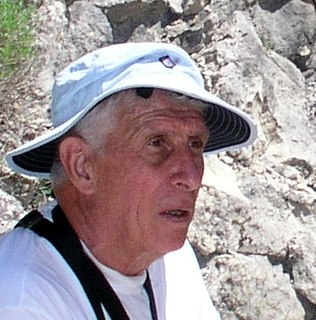 Michel Siffre is a French underground explorer, adventurer and scientist. He was born in Nice, where he spent his childhood. At just 10 years of age he explored the Imperial Cave Park, and discovered a passion for caving.

Grotte du Vallonnet is an archaeological site located near Roquebrune-Cap-Martin, between Monaco and Menton, in France, that was first discovered in 1958. Stone tools found at the site have been dated to between 1 and 1.05 million years old, making it one of the earliest sites of human settlement known in Europe. 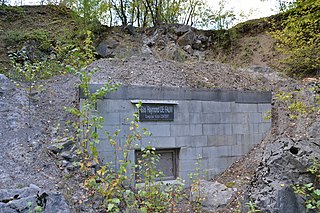 The Grotte de Rosée is located near Éhein in the municipality of Engis, in Belgium. It has been classified as Wallonia's patrimoine immobilier exceptionnel de la Région wallonne, and can be visited only by accredited scientists. 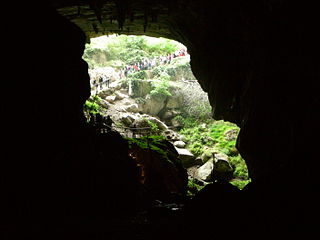 Lombrives cave is located in Ornolac-Ussat-les-Bains, at the eastern edge of the Pyrénées Ariégeoises Natural Regional Park, Ariège, southwestern France. Earliest excavations by Félix Régnault took place in the late nineteenth century that confirmed human occupation during the Neolithic. The Lombrives cave has been declared the largest or widest cave of Europe in terms of volume. Having a length of 39 kilometres it is certainly not the longest cave, compared to several other European sites, that exceed a length of over 200 kilometres (120 mi).

La Verna is a show cave in the commune of Sainte-Engrâce in the department of Pyrénées-Atlantiques in France. 660 metres (2,170 ft) of mined tunnel leads into the Salle de la Verna, the largest chamber in a show cave in the world. It has a diameter of 250 metres (820 ft), a height of 194 metres (636 ft), a surface area of 5 hectares and a volume of 3.6 million cubic metres (130,000,000 cu ft). A river cascades into the chamber from halfway up the east wall, and sinks into boulders near the base of the chamber.

The caves of Arcy-sur-Cure are a series of caves located on the commune of Arcy-sur-Cure, Burgundy, France. Some of them contained archaeological artefacts, from the Mousterian to Gallo-Roman times.

The Schmerling Caves are a group of caves on the right bank of the stream called the Awirs, near the village of Awirs in Flémalle, Belgium. The caves are notable for their past fossil finds, particularly of hominins. They were explored in 1829 by Philippe-Charles Schmerling, who discovered, in the lower cave, the remains of two individuals, one of which, now known as Engis 2, was a fossil of the first Neanderthal ever found; the other was a Neolithic homo sapiens. Also known as Trô Cwaheur or Trou Caheur, this lower cave has since collapsed. A third cave was destroyed because of work on the adjacent quarry, the Ancienne Carrière des Awirs.

The Lyell Cave, formerly called Grande caverne d'Engihoul, is located near Éhein, in the province of Liège, Wallonia, Belgium. It is one of many caves investigated or discovered by Philippe-Charles Schmerling, in 1831; the cave is named for a later researcher, Sir Charles Lyell, who visited the cave in 1860.