The Little Niangua Suspension Bridge is a Little Niangua River crossing in Camden County, Missouri on Route J. It is a two lane heavy vehicle bridge. 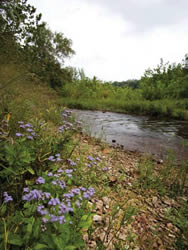 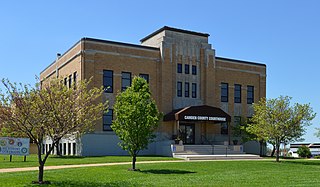 Camden County is a county located in the U.S. state of Missouri. As of the 2010 Census, the population was 44,002. Its county seat is Camdenton. The county was organized January 29, 1841 as Kinderhook County and renamed in 1843 for Charles Pratt, 1st Earl Camden, Lord Chancellor of the United Kingdom, and leader of the Whig Party. 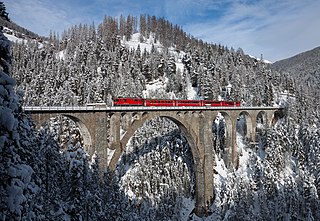 A bridge is a structure built to span a physical obstacle, such as a body of water, valley, or road, without closing the way underneath. It is constructed for the purpose of providing passage over the obstacle, usually something that can be detrimental to cross otherwise. There are many different designs that each serve a particular purpose and apply to different situations. Designs of bridges vary depending on the function of the bridge, the nature of the terrain where the bridge is constructed and anchored, the material used to make it, and the funds available to build it.

The bridge was constructed in 1933 by the Clinton Bridge Company. It was designed as a self-anchored bridge.

Clinton Bridge and Iron Works was a significant company in Clinton, Iowa.

The bridge is still in use today and is in good condition; however it was closed in October 2007 for much needed repairs. These repairs included fixing movement underneath the deck.

A cable-stayed bridge has one or more towers, from which cables support the bridge deck. A distinctive feature are the cables or stays, which run directly from the tower to the deck, normally forming a fan-like pattern or a series of parallel lines. This is in contrast to the modern suspension bridge, where the cables supporting the deck are suspended vertically from the main cable, anchored at both ends of the bridge and running between the towers. The cable-stayed bridge is optimal for spans longer than cantilever bridges and shorter than suspension bridges. This is the range within which cantilever bridges would rapidly grow heavier, and suspension bridge cabling would be more costly. 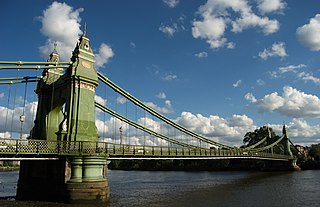 Hammersmith Bridge is a suspension bridge that crosses the River Thames in west London. It enables pedestrians and cyclists to cross between the southern part of Hammersmith in the London Borough of Hammersmith and Fulham, on the north side of the river, and Barnes in the London Borough of Richmond upon Thames, on the south side of the river. The current bridge, which is Grade II* listed and was designed by the noted civil engineer Sir Joseph Bazalgette, is the second permanent bridge on the site, and was closed to all motor traffic in April 2019. 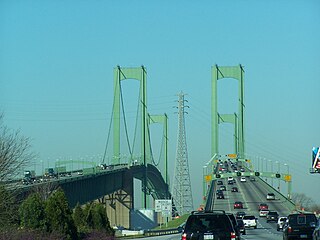 The Delaware Memorial Bridge is a twin suspension bridge crossing the Delaware River. The toll bridges carry Interstate 295 and U.S. Route 40 between Delaware and New Jersey. The bridge was designed by the firm known today as HNTB with consulting help from engineer Othmar Ammann, whose other designs include the Walt Whitman Bridge and Verrazzano-Narrows Bridge. It is also one of only two crossings of the Delaware River with both U.S. Highway and Interstate Highway designations, the other being the Benjamin Franklin Bridge.

Lake of the Ozarks is a large reservoir created by impounding the Osage River in the northern part of the Ozarks in central Missouri. Extents of three smaller tributaries to the Osage are included in the impoundment: the Niangua River, Grandglaize Creek, and Gravois Creek. The lake has a surface area of 54,000 acres (220 km2) and 1,150 miles (1,850 km) of shoreline, and the main channel of the Osage Arm stretches 92 miles (148 km) from end to end. The total drainage area is over 14,000 square miles (36,000 km2). The lake's serpentine shape has earned it the nickname "The Magic Dragon", which has in turn inspired the names of local institutions such as The Magic Dragon Street Meet.

Rachel Carson Bridge, also known as the Ninth Street Bridge, spans the Allegheny River in Downtown Pittsburgh, Pennsylvania in the United States. The total length is 840 feet (260 m) including the 410-foot (120 m) main span and two 215-foot (66 m) side spans, or 995 feet (303 m) including the approaches. The total width of the deck is 62 feet (19 m), including the 38-foot (12 m) roadway plus two 10-foot (3.0 m) sidewalks outside the compressive plate girder. Whereas the roadway formerly carried two vehicle lanes and two streetcar tracks, it now carries four wide vehicle lanes. 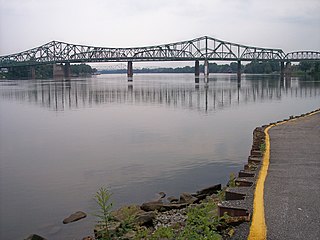 The Parkersburg–Belpre Bridge is a four-lane cantilever bridge that connects Parkersburg, West Virginia to Belpre, Ohio across the Ohio River. The bridge was completed in 1980. The bridge had been signed U.S. Route 50 (US 50) until June 13, 2008, when that highway was re-routed to the Blennerhassett Island Bridge a few miles to the west, as part of the completion of the Corridor D project around Parkersburg. The American Discovery Trail uses the bridge to cross the Ohio River.

The Liberty Bend Bridge is the common name for the two continuous truss bridges on Route 291 over the Missouri River in Sugar Creek, Missouri in the Kansas City metropolitan area.

The Rocheport Interstate 70 Bridge is a four-lane continuous truss bridge over the Missouri River on Interstate 70 (I-70) between Cooper and Boone counties at Rocheport.

The Jefferson City Bridge is the name for two continuous through arch truss bridges over the Missouri River at Jefferson City, Missouri, over which U.S. Routes 54 (US 54) and 63 travel between Cole and Callaway Counties. 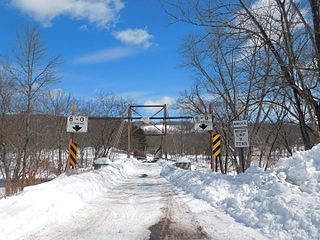 The Kellams Bridge, also known as the Little Equinunk Bridge, is an underspanned suspension bridge spanning the Delaware River between Stalker, Pennsylvania, and Hankins, New York.

The Barryville–Shohola Bridge is the fifth generation of bridges constructed over the Delaware River at the communities of Shohola Township, Pennsylvania and Barryville, New York. The bridge serves both communities, with two major state legislative highways, Pennsylvania Traffic Route 434 and New York State Touring Route 55. The bridge itself is 812 feet (247 m) long and is 23 feet (7.0 m) wide, using four total spans across the river. It is maintained by the NY–PA Joint Interstate Bridge Commission, which is jointly owned by the states of New York and Pennsylvania. 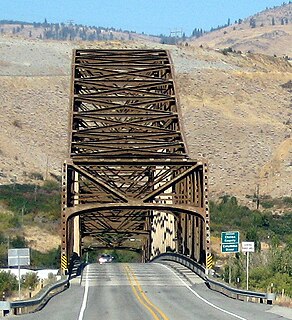 Spring Garden Street Bridge is a highway bridge in Philadelphia, Pennsylvania, USA, that crosses the Schuylkill River below Fairmount Dam. It connects West Philadelphia to the Philadelphia Museum of Art and Benjamin Franklin Parkway. It is the fourth bridge at this location. 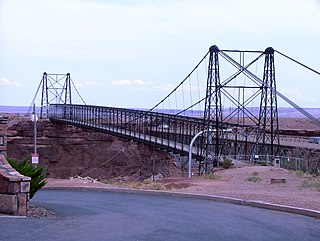 Macks Creek is a stream in Dallas and Camden counties in the U.S. state of Missouri. It is a tributary of the Little Niangua River.