Maroni may refer to:

This disambiguation page lists articles associated with the title Maroni.
If an internal link led you here, you may wish to change the link to point directly to the intended article.

Annan may refer to:

Cypriot refers to someone or something of, from, or related to the country of Cyprus, including:

Litani may refer to:

Cut may refer to:

Tala may refer to:

Meric or Méric or Meriç may refer to:

Roberto Ernesto Maroni is an Italian politician from Varese, former President of Lombardy. He was leader of the Northern League, a party seeking autonomy or independence for Northern Italy or Padania. From 1992 to 2013 he was a Member of the Chamber of Deputies of the Italian Republic, always elected in Lombard constituencies. He was Interior Minister of the Italian Republic from 1994 to 1995, and from 2008 to 2011.

Dali or Dalí may refer to:

Koshi or Kōshi may refer to:

The Litani or Itany is a river which forms part of the boundary between Suriname and French Guiana. It is a tributary, or the upper course, of the Maroni. The boundary is disputed, with Suriname also claiming land to the east of the river.

Salvatore Vincent Maroni is a fictional character appearing in American comic books published by DC Comics, commonly in association with Batman. The character is portrayed as an infamous gangster in Gotham City and an enemy of Batman. Maroni is most famous for disfiguring Harvey Dent, setting the stage for the young district attorney's transformation into the supervillain Two-Face.

Maroni is a village located in the Larnaca District of Cyprus. 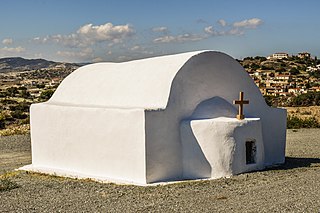 Psematismenos is a village in the Larnaca District of Cyprus, located 2 km northwest of Maroni.

The 2011–12 Cypriot Third Division was the 41st season of the Cypriot third-level football league. AEK Kouklia won their 1st title.

The 2012–13 Cypriot Third Division was the 42nd season of the Cypriot third-level football league. Karmiotissa Polemidion won their 1st title.

The 2010–11 Cypriot Fourth Division was the 26th season of the Cypriot fourth-level football league. Ormideia FC won their 1st title.

POL/AE Maroni was a Cypriot football club based in Maroni, Cyprus. They were played 1 season in Cypriot Third Division and 1 season in Fourth Division. They dissolved at 2012.