Matías Ariel Fernández Fernández (Spanish pronunciation:  [maˈti.as aˈɾjel feɾˈnandes feɾˈnandes] , born 15 May 1986) is a Chilean professional footballer who plays for Colo-Colo as an attacking midfielder. He is known for his dribbling skills, also being a free-kick specialist.

After starting out at Colo-Colo, he played several seasons with Villarreal, Sporting and Fiorentina, moving to Europe in 2006.

Fernández was elected South American Footballer of the Year in 2006, and also appeared for the Chilean national team in the 2010 World Cup and three Copa América tournaments, winning the 2015 edition of the latter tournament.

Fernández was born in the Caballito neighbourhood in Buenos Aires to Argentine mother Mirtha and Chilean father Humberto. He moved to La Calera, Chile, at the age of just four. [1]

Fernández began with the youth squads of Colo-Colo at the age of 12. His debut in the Primera División came on 1 August 2004 against Club Universidad de Chile, and a week later he scored his first two goals, against Cobresal.

Fernández would go on to net a total of eight goals in the 2004 Clausura , and was named best young player of the season. In the 2006 Apertura he helped his team capture their 24th title and, in December of the same year, he helped it reach the final of the Copa Sudamericana, lost to C.F. Pachuca of Mexico, by scoring nine times in six games for the tournament; he left Colo-Colo on a high note, winning the 2006 Clausura tournament and the South American Footballer of the Year award.

In late October 2006, Fernández was signed by Spanish club Villarreal CF for a fee of €8.7 million, joining compatriot Manuel Pellegrini who was the coach. [2] The transaction was made before he received the "South American Player of the Year" award and, despite reports that Real Madrid and Chelsea were also interested, he agreed to terms and arrived at the Valencia airport on 27 December; on 7 January 2007 he made his La Liga debut in a 0–1 home loss against Valencia CF, [3] scoring his first competitive goal three months later in a 3–0 league win at Gimnàstic de Tarragona. [4]

Despite having had a buyout clause of €50 million inserted in his contract, Fernández failed to achieve significant playing time during his first three seasons, but still contributed with 30 matches and three goals in 2007–08 as the team finished a best-ever runners-up. On 10 May 2009, he scored from a penalty kick in a 3–3 away draw against eventual champions FC Barcelona. [5]

On 1 July 2009, after being deemed surplus to requirements by new Villarreal coach Ernesto Valverde, Fernández moved to Sporting CP on a four-year contract, for €3.65 million, [6] with a further €500,000 payable depending on appearances. Villarreal would retain 20% of the profit on any future sale of the player. [7]

Fernández scored his first goal for his new team on 27 October 2009, in a 1–1 draw at Vitória de Guimarães, [8] adding another the following week also in the Portuguese Primeira Liga, at home against C.S. Marítimo (again 1–1); [9] in the UEFA Europa League he netted another goal, in injury time of the Lions' 3–0 win over Everton in the competition's round-of-16 (4–2 on aggregate). [10]

Fernández remained an important attacking unit in 2011–12, under both Domingos Paciência and his successor Ricardo Sá Pinto. He scored three of his four league goals against U.D. Leiria, two in the 3–1 home win [11] and the game's only in the second match through a free kick in the 101st minute – the game had been interrupted for nine minutes due to floodlights malfunction. [12]

On 27 July 2012, Fernández transferred to Italian club ACF Fiorentina for about €3.1 million, plus €1.5 million bonuses. [13] [14] During his spell at the Stadio Artemio Franchi , he was consistently bothered by physical problems. [15]

On 4 September 2017, free agent Fernández signed with Club Necaxa. [18] [19] On 4 February 2019 he joined Categoría Primera A defending champions Atlético Junior on a one-year contract, [20] scoring a late equaliser on his debut 12 days later after coming on as a second-half substitute in the 1–1 home draw against Rionegro Águilas; he was named player of the match. [21]

On 18 December 2019, Fernández returned to Colo-Colo by agreeing to a one-year contract with the option for a further season. [22]

Fernández captained the Chile team at the 2005 FIFA World Youth Championship, scoring a goal in the 7–0 victory over Honduras. Despite a second-round exit to the Netherlands he displayed overall good football, playing alongside Nicolás Canales, Carlos Villanueva and José Pedro Fuenzalida.

Also a former under-17 international, Fernández quickly established as an integral part of the full side, netting five goals and appearing for the nation at the 2007 Copa América. After figuring prominently in the 2010 FIFA World Cup qualification campaign, he was selected for the finals in South Africa, playing – and starting – in the group stage against Honduras and Switzerland (both 1–0 wins), in an eventual last-16 exit. [23]

In May 2014, Fernández underwent an ankle surgery on his right foot, thus being unable to participate in that year's World Cup. [24] He was included in the Chilean squad for the 2015 Copa América, being sent off in the opening match, a 2–0 win over Ecuador at the Estadio Nacional in Santiago; [25] after having come as a 75th-minute substitute for Jorge Valdivia, he was one of four players on target in the final against Argentina, which ended 4–1 in a penalty shootout. [26]

Fernández was initially named in Chile's Copa América Centenario squad, but had to withdraw through injury and was replaced by Mark González [27] as the nation again won the tournament.

Fernández married his Chilean wife in March 2013, but the couple's first child had already been born in late 2008. He was fined for speeding when he was driving from Santiago to Viña del Mar, to witness the baby's birth. [28]

Before moving to Europe, Fernández was often compared to compatriot David Pizarro, who spent most of his professional career in Italy. [29]

Luis Ernesto Pérez Gómez, commonly known as Lucho Pérez, is a former Mexican international footballer, who played as a defensive midfielder. He has also capped with the Mexico national team.

Martín Palermo is an Argentine former professional footballer who played as a striker.

Diego Cagna is an Argentine football coach and former player. He played as midfielder and retired in 2005.

Manuel Alejandro Neira Díaz is a retired Chilean football player who played as a striker.

Humberto Andrés Suazo Pontivo, nicknamed Chupete, is a Chilean professional footballer who plays as a striker for Deportes Santa Cruz. In 2006, he was awarded by IFFHS as the world's top goal scorer of the year. After winning the Apertura 2007 with Colo Colo, he moved to Liga MX club CF Monterrey, where he became the club's all-time top scorer as well as winning two Liga MX titles, and three CONCACAF Champions League titles. He returned to Colo-Colo in 2015 after seven years with Monterrey. 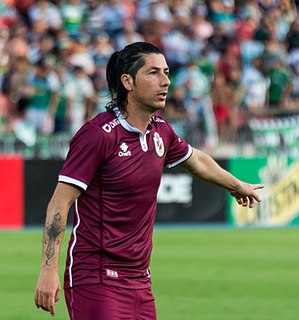 Jaime Andrés Valdés Zapata is a Chilean footballer that currently plays for Primera División club Deportes La Serena. He usually plays as midfielder. Valdés was member of his national under-20 national team in the 2001 FIFA World Youth Championship and has represented three times the senior team between 2001 and 2010. 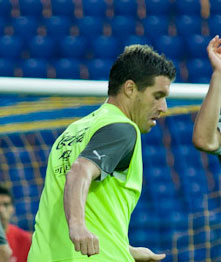 Andrés Scotti Ponce de León is a Uruguayan former professional footballer who played as centre-back and very rarely as left-back. Between 2006 and 2013 he made 40 appearances scoring 1 goal for the Uruguay national team 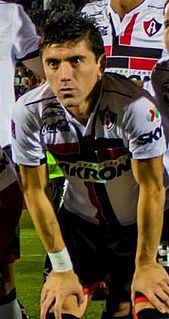 Héctor Raúl Mancilla Garcés is a Chilean former footballer who played as a striker. A true striker, Mancilla is not "the fastest or most skillful striker but his true threat is his ability to finish the play in short spaces.". He also holds Mexican citizenship. 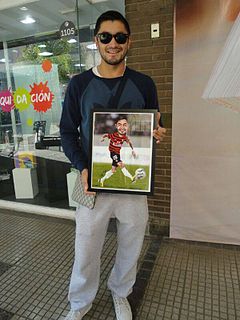 Rodrigo Javier Millar Carvajal is a Chilean footballer who plays as a midfielder for Monarcas Morelia. He played for Chile in the 2010 FIFA World Cup. He also holds Mexican citizenship.

Mathías Leonardo Vidangossy Rebolledo is a Chilean professional footballer who plays as an attacking midfielder or winger. 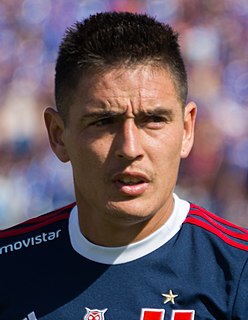 Igor Lichnovsky Osorio is a Chilean professional footballer who plays for Mexican club Cruz Azul as a central defender.

Juan Antonio Delgado Baeza is a Chilean footballer who plays for Mexican club Club Necaxa as a winger.

Brian Fernández is an Argentine professional footballer who plays as a forward for Colón in the Argentine Primera División.