Michelotti is an Italian surname. Notable people with the surname include:

Biordo Michelotti was an Italian condottiero, who was lord of Perugia and commander-in-chief of the Republic of Florence.

Maria Domenica Michelotti,, served as a Captain Regent of San Marino from 1 April 2000 to 1 October 2000. She served with Gian Marco Marcucci.

Cassini may refer to:

Volvo Elizabeth I was a concept car designed by Giovanni Michelotti and built by Vignale in 1953 on the chassis of a Volvo P445. The lines are recognizable in the later Amazon, but it has a small triangular, Alfa Romeo-like grille.

Carrozzeria Allemano was an automobile coachbuilder in Turin, Italy, owned by Serafino Allemano. 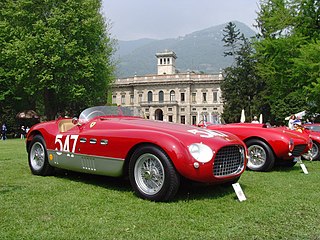 The Ferrari 340 Mexico was a Ferrari race car. It used 4.1 L Lampredi V12 engine producing around 280bhp. Just 4 were made in 1952, 3 Vignale Berlinettas and 1 Vignale Spyder; all designed by Giovanni Michelotti.

Brocchi is a surname, and may refer to:

The Triumph Italia 2000 Coupé was built between 1959 and 1962, during which time 329 cars were produced. Designed by Giovanni Michelotti, the TR3 chassis and mechanical components were supplied by the Triumph Motor Company in the United Kingdom, and built by Alfredo Vignale in Turin, Italy.

The Maserati 5000 GT also commonly known as The Shah of Persia (1959–1964) is a 2-door coupé automobile, made by Maserati. A total of 33 were produced. In 2018, Carrozzeria Touring Superleggera announced that the latest generation of Maserati GranTurismo-based Sciàdipersia will be limited to 15 vehicles.

Bolle is a surname. Notable people with the surname include:

Giovanni is a male Italian given name. It is the Italian equivalent of John. Giovanni is frequently contracted to Gianni, Gian, or Gio, particularly in the name Gianbattista, and can also be found as a surname. It is sometimes spelled as Geovanni, Giovonnie or Giovannie when used as an English female name. Its female counterpart is Giovanna.

CECOMP Spa is an Italian automotive company established in 1978 by Giovanni Forneris and is based in La Loggia, Turin. The company specialises in developing prototypes and models for car manufacturers such as Lancia, Maserati and Toyota. Since 2011, the company has expanded into manufacturing, producing the electric Bluecar for the French Bolloré company.

Édouard Placide Duchassaing de Fontbressin was a French naturalist. He is noted for his work in botany and spongiology.

Neopetrosia proxima is a species of marine petrosiid sponge native to the tropical and subtropical waters of the western Atlantic Ocean.

San Marino sent a delegation to compete at the 2014 Winter Olympics in Sochi, Russia from 7 to 23 February 2014. This was the country's ninth appearance and the first time a woman was representing the nation at the Winter Olympics. The delegation consisted of three officials and two competitors, alpine skiers Vincenzo Michelotti and Federica Selva. Both of them took part in giant slalom races and were unranked in the competition. Michelotti was disqualified and Selva could not finish her race.

Alberto Michelotti is a retired Italian football player and referee.

Agelas dispar is a species of demosponge in the family Agelasidae. It lives on shallow-water reefs in the Caribbean Sea and around the West Indies.

Cobelli is an Italian surname. Notable people with the surname include: 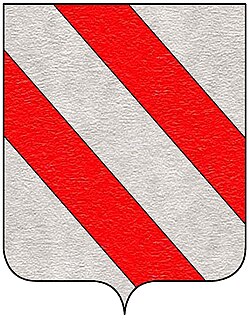 Ferretti is an Italian surname. Notable people with the surname include: