Air Commodore (retired) Mike Tichafa Karakadzai (Name 'Karakadzai' origin from Madagascar) (7 March 1957 – 19 August 2013) was a former senior officer in the military of Zimbabwe. Europe, and more recently Australia, have frozen his assets and forbidden his travel in their territories.

Karakadzai qualified for a Graduate Diploma in Purchasing and Supply from the Chartered Institute of Purchasing & Supply in the United Kingdom. He obtained an MSc in Strategic Management from the University of Derby. He attended the Royal College of Defence Studies in the United Kingdom where he obtained an MSc in Defence Strategic Studies. He was appointed Deputy Secretary for Policy and Procurement in the Zimbabwe Ministry of Defence in 2000. [1]

The University of Derby is a public university in the city of Derby, England. It traces its history back to the establishment of the Derby Diocesan Institution for the Training of Schoolmistresses in 1851. It gained university status in 1992 as one of the new universities.

The Royal College of Defence Studies (RCDS) instructs the most promising senior officers of the British Armed Forces, Her Majesty's Diplomatic Service and Civil Service in national defence and international security matters at the highest level, to prepare them for the top posts in their respective services. It forms part of the Defence Academy of the United Kingdom, and is its most senior and prestigious component. In addition, there are many overseas attendees these days, who are close allied to the United Kingdom government.

In October 2002 the United Nations published the Final report of the Panel of Experts on the Illegal Exploitation of Natural Resources and Other Forms of Wealth of the Democratic Republic of the Congo. The report said Karakadzai had the position of Deputy Secretary of COSLEG, which the United Nations described as "a Congo-Zimbabwe joint stock company ... a key vehicle for military-backed commerce involving mostly diamonds, banking and timber in the Government-held areas". It named Karakadzai as a key player in arranging a January 2001 deal with John Bredenkamp's Tremalt whereby Tremalt obtained copper mining resources in the DRC at a nominal price in exchange for paying a share of proceeds to the governments of the DRC and Zimbabwe. Some of the payments were to be made in the form of military equipment. [2]

The United Nations (UN) is an intergovernmental organization that was tasked to maintain international peace and security, develop friendly relations among nations, achieve international co-operation and be a centre for harmonizing the actions of nations. The headquarters of the UN is in Manhattan, New York City, and is subject to extraterritoriality. Further main offices are situated in Geneva, Nairobi, Vienna and The Hague. The organization is financed by assessed and voluntary contributions from its member states. Its objectives include maintaining international peace and security, protecting human rights, delivering humanitarian aid, promoting sustainable development and upholding international law. The UN is the largest, most familiar, most internationally represented and most powerful intergovernmental organization in the world. In 24 October 1945, at the end of World War II, the organization was established with the aim of preventing future wars. At its founding, the UN had 51 member states; there are now 193. The UN is the successor of the ineffective League of Nations.

John Arnold Bredenkamp is a Zimbabwean businessman and former rugby player. He is the founder of the Casalee Group.

Tremalt Limited was a mining company incorporated in the Democratic Republic of the Congo (DRC). It was the vehicle for a highly criticized deal in 2001 in which it bought copper assets at far below their estimated value in return for a private agreement to pay a share of profits to the DRC and Zimbabwe governments. Allegedly some of the payments were made in the form of military equipment. The company made few investments in its assets, several of which the DRC government took back. In 2006 it was sold for about $60m.

Karakadzai was named in February 2004 by the European Union as being among Zimbabwe government members whose assets must be frozen by members and who would be barred from entry or transit by members of the union. [3] In December 2008 Australia added him to its list of targeted sanctions against those responsible for the human rights abuses in Zimbabwe. [4]

On 1 November 2005 Karakadzai was appointed General Manager of the National Railways of Zimbabwe. [1] In February 2011 President Robert Mugabe said that Karakadzai would be in charge of his reelection campaign in Harare, at a date to be announced. Sources said this was likely to be a very violent campaign. [5] In May 2011 Karakadzai said that lack of credit from foreign lenders was preventing the National Railways of Zimbabwe from replacing aging equipment. He blamed this on illegal sanctions imposed on the country by the west. [6] He died in a car accident on 19 August 2013 in Matebeleland after his vehicle hit a cow and overturned. [7]

Robert Gabriel Mugabe is a Zimbabwean revolutionary and politician who served as Prime Minister of Zimbabwe from 1980 to 1987 and then as President from 1987 to 2017. He chaired the Zimbabwe African National Union (ZANU) group from 1975 to 1980 and led its successor political party, the ZANU – Patriotic Front (ZANU–PF), from 1980 to 2017. Ideologically an African nationalist, during the 1970s and 1980s he identified as a Marxist–Leninist, although after the 1990s self-identified only as a socialist. His policies have been described as Mugabeism. 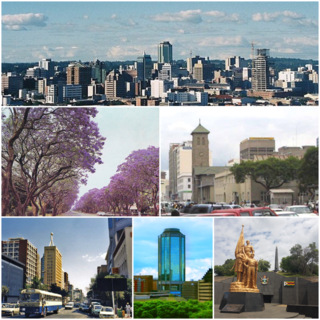 Harare is the capital and most populous city of Zimbabwe. The city proper has an area of 960.6 km2 (371 mi2) and an estimated population of 1,606,000 in 2009, with 2,800,000 in its metropolitan area in 2006. Situated in north-eastern Zimbabwe in the country's Mashonaland region, Harare is a metropolitan province, which also incorporates the municipalities of Chitungwiza and Epworth. The city sits on a plateau at an elevation of 1,483 metres above sea level and its climate falls into the subtropical highland category.

Following the Lancaster House Agreement of 1979 there was a transition to internationally recognized majority rule in 1980; the United Kingdom ceremonially granted Zimbabwe independence on 18 April that year. In the 2000s Zimbabwe's economy began to deteriorate due to various factors, including, the imposition of economic sanctions by western countries led by the United Kingdom, and also due to wide spread corruption in government. Economic instability caused a lot of Zimbabweans to move overseas or to neighboring countries. Prior to its recognized independence as Zimbabwe in 1980, the nation had been known by several names: Rhodesia, Southern Rhodesia and Zimbabwe Rhodesia.

The Democratic Republic of the Congo, also known as DR Congo, the DRC, DROC, Congo-Kinshasa, East Congo, or simply the Congo, is a country located in Central Africa. It is sometimes anachronistically referred to by its former name of Zaire, which was its official name between 1971 and 1997. It is, by area, the largest country in Sub-Saharan Africa, the second-largest in all of Africa, and the 11th-largest in the world. With a population of over 78 million, the Democratic Republic of the Congo is the most populated officially Francophone country, the fourth-most-populated country in Africa, and the 16th-most-populated country in the world. Currently, eastern DR Congo is the scene of ongoing military conflict in Kivu, since 2015. 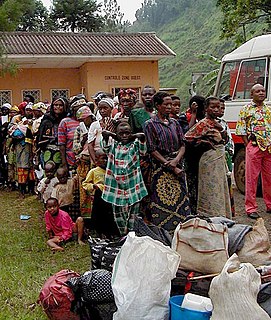 Joice "Teurai-Ropa" Mujuru is a Zimbabwean politician who served as Vice-President of Zimbabwe from 2004 to 2014. Previously she had served as a government minister. She also served as Vice-President of ZANU-PF. She was married to Solomon Mujuru until his death in 2011 and was long considered a potential successor to President Robert Mugabe, but in 2014 she was denounced for allegedly plotting against Mugabe. As a result of the accusations against her, Mujuru lost both her post as Vice-President and her position in the party leadership. She was expelled from the party a few months later, after which she formed the new Zimbabwe People First party.

Gibson Jama Sibanda was a Zimbabwean politician and trade unionist. He was a founding member of the Movement for Democratic Change and at the time of his death was the Vice-President of the faction of the Movement for Democratic Change led by Arthur Mutambara. A former president of the Zimbabwe Congress of Trade Unions, he was first elected to the House of Assembly in the 2000 parliamentary election. He was a member of the Senate and a Minister of State in the Office of Deputy Prime Minister Arthur Mutambara at the time of his death in 2010.

The following lists events that happened during 1998 in Zimbabwe. 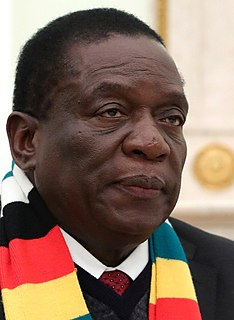 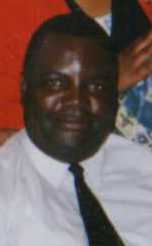 Angola–Zimbabwe relations have remained cordial since the birth of both states, Angola in 1975 and Zimbabwe in 1980, during the Cold War. While Angola's foreign policy shifted to a pro-U.S. stance based on substantial economic ties, under the rule of President Robert Mugabe Zimbabwe's ties with the West soured in the late 1990s.

Vitalis Musungwa Gava Zvinavashe was a Zimbabwean general officer, politician and a commander of the Zimbabwe Defence Forces "CDF". Zvinavashe had modest academic credentials but was renowned among Zimbabwe’s military circles as a strategist. 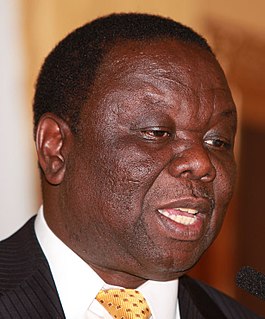 The Kambove mines are a group of active or abandoned copper mines near Kambove in the Democratic Republic of the Congo.

Dan Gertler is an Israeli billionaire businessman in natural resources and the founder and President of the DGI Group of Companies. He has diamond and copper mining interests in the Democratic Republic of the Congo (DRC) and has invested in iron ore, gold, cobalt, oil, agriculture, and banking. As of 2015 his fortune was estimated at $1.26 billion by Forbes.

The following lists events that happened during 1998 in the Democratic Republic of the Congo.

On 20 December 2016 the Democratic Republic of the Congo's president, Joseph Kabila, announced that he would not leave office despite the end of his constitutional term. Protests subsequently broke out across the country, which has never had a peaceful transfer of power since it gained independence in 1960. The protests were met with the government's blocking of social media, and violence from security forces which left dozens dead. Foreign governments condemned the attacks against protesters.

On the evening of 14 November 2017, elements of the Zimbabwe Defence Forces (ZDF) gathered around Harare, the capital of Zimbabwe, and seized control of the Zimbabwe Broadcasting Corporation and key areas of the city. The next day, the ZDF issued a statement saying that it was not a coup d'état and that President Robert Mugabe was safe, although the situation would return to normal only after the ZDF had dealt with the "criminals" around Mugabe responsible for the socio-economic problems of Zimbabwe. Jacob Zuma, then-President of South Africa, phoned Mugabe and was told that Mugabe was under house arrest but otherwise "fine".