Athos Range is the northernmost range in the Prince Charles Mountains of Mac. Robertson Land, Antarctica. The range consists of many individual mountains and nunataks that trend east-west for 40 miles (64 km) along the north side of Scylla Glacier.

Deception Glacier is a glacier between the Warren Range and the Boomerang Range, flowing south into upper Mulock Glacier. It was so named by the New Zealand party of the Commonwealth Trans-Antarctic Expedition (1956–58) because it appears to lead directly into Skelton Neve but instead drains southward.

Mount Aurora is a round-topped volcanic summit, 1,040 metres (3,410 ft) high, the highest point on Black Island in the Ross Archipelago. It was named by the New Zealand Geological Survey Antarctic Expedition (1958–59) after the Aurora, the vessel which conveyed the Ross Sea Party of Ernest Shackleton's Imperial Trans-Antarctic Expedition (1914–17) to McMurdo Sound.

Anne Hill is the most prominent hill on Radian Ridge in the Royal Society Range of Victoria Land. It rises to 2,079 metres (6,820 ft) at the east side of Lava Tongue Pass. It was named after Anne C. Wright, a geologist with, firstly, the New Zealand Geological Survey field party in this area, 1977–78, then with United States Antarctic Research Program field parties, 1982–83, 1983–84, and 1985–86 seasons, with work at Ross Island, Minna Bluff, Mount Discovery, Mount Morning, and Mason Spur.

Mount Bentley is a mountain (4,245 m) standing 2 nautical miles north of Mount Anderson in the main western ridge of the Sentinel Range, Antarctica. It was discovered by the Marie Byrd Land Traverse party, 1957–58, and named for Dr. Charles R. Bentley, leader of the traverse party and chief traverse seismologist at Byrd Station, 1957–59.

Mount Bjaaland is a rock peak, the southeasternmost summit of the massif at the head of Amundsen Glacier, in the Queen Maud Mountains. In November 1911, a number of mountain peaks in this general vicinity were observed and rudely positioned by the South Pole Party under Roald Amundsen. Amundsen named one of them for Olav Bjaaland, a member of the party. The peak described was mapped by United States Geological Survey (USGS) from surveys and U.S. Navy aerial photography, 1960–64. For the sake of historical continuity and to commemorate the Norwegian exploration in this area, the Advisory Committee on Antarctic Names (US-ACAN) has selected this feature to be designated Mount Bjaaland. Other peaks in the massif have been named for members of Amundsen's South Pole Party.

Norman Crag is a rugged nunatak 2.2 nautical miles (4.1 km) north of the summit of Mount Bird, Ross Island. The feature has a divided summit area and rises to over 1400 m. Named by New Zealand Geographic Board (NZGB) (2000) after Bob Norman.

Mount Jumper is a mountain 2,890 metres (9,480 ft) high located 7 nautical miles (13 km) east of Mount Viets in the central part of the Sentinel Range of the Ellsworth Mountains in Antarctica. Debren Pass separates it from the side ridge descending via Evans Peak. The mountain overlooks Ellen Glacier to the north and east, and its tributaries Patton Glacier and Rumyana Glacier to the south and northwest respectively.

Palais Bluff is an ice-free coastal bluff rising to over 400 m between the terminus of Shearwater Glacier and Quaternary Icefall in northwest Ross Island. The bluff overlooks Wohlschlag Bay. At the suggestion of P.R. Kyle, named by Advisory Committee on Antarctic Names (US-ACAN) (2000) after Julie Palais, Program Manager for Glaciology, Office of Polar Programs, National Science Foundation (NSF). As a Ph.D. student at Ohio State University, collected snow samples and short ice core on Ross Island to examine the volcanic record. She has made many trips to Antarctica. 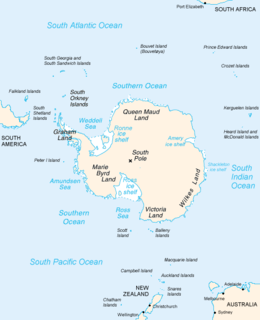 Elliott Glacier is a small channel glacier that drains northward to the Budd Coast of Antarctica, midway between Cape Hammersly and Cape Waldron. It was delineated from aerial photographs taken by U.S. Navy Operation Highjump (1946–47), and named by the Advisory Committee on Antarctic Names after Samuel Elliott, a midshipman on the sloop Vincennes during the United States Exploring Expedition (1838–42) under Lieutenant Charles Wilkes. 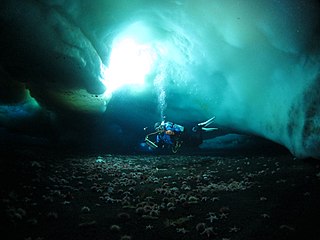 Mount Mohl is a mountain, 3,710 metres (12,170 ft) high, at the east side of Vinson Massif, surmounting the ridge between the heads of Dater Glacier and Thomas Glacier, in the Sentinel Range of the Ellsworth Mountains, Antarctica. It is connected to Doyran Heights to the northeast by Goreme Col.

Fitzgerald Glacier is a prominent valley glacier draining to Lady Newnes Bay from the ice cascades on the south and west slopes of Mount Murchison, in Victoria Land, Antarctica. At the mouth it coalesces with the Icebreaker Glacier before debouching on Lady Newnes Bay. It was explored by the New Zealand Geological Survey Antarctic Expedition, 1958–59, and named by the New Zealand Antarctic Place-Names Committee for E.B. Fitzgerald, deputy leader of the expedition.

Hansen Glacier is a tributary glacier 10 nautical miles long, flowing northeast from Mount Tuck between Veregava Ridge and Doyran Heights to join Dater Glacier west of Dickey Peak, in the Sentinel Range of the Ellsworth Mountains in Antarctica. It was first mapped by the United States Geological Survey from surveys and U.S. Navy air photos, 1957–59, and was named by the Advisory Committee on Antarctic Names for Herbert L. Hansen, a meteorologist at South Pole Station in 1957.

Mason Spur is an elevated spur, partially ice-covered and over 1,300 metres (4,300 ft) high, which projects eastward from Mount Morning in Victoria Land, Antarctica. It was named by the Advisory Committee on Antarctic Names in 1963 for Robert Mason, a United States Antarctic Research Program representative at McMurdo Station in 1962–63.

Mount Tararua is a prominent peak, 2,550 m, surmounting the southwest part of Monteath Hills in the Victory Mountains, Victoria Land. Climbed on January 3, 1963 by the Southern Party of New Zealand Geological Survey Antarctic Expedition (NZGSAE) (1962–63), who named it after their parent mountain club, the Tararua Tramping Club, Wellington, New Zealand.

Starbuck Cirque is a remarkable cirque, 4 nautical miles (7 km) wide, between the base of Tentacle Ridge and Mount Hughes in Cook Mountains. Named by Advisory Committee on Antarctic Names (US-ACAN) after Michael J. Starbuck, United States Geological Survey (USGS) cartographer who, with Roger A. Barlow, operated the seismometer and Doppler satellite receiving stations at South Pole, winter 1992; member of US-NZ field team in a program to combine US and NZ geodetic networks in the McMurdo Dry Valleys area, summer 1996–97.

Ruru Crests are two parallel rock ridges 2.2 nautical miles (4.1 km) northwest of the summit of Mount Bird, Ross Island. The feature rises to c.1400 m. It is one of several landmarks near Mount Bird assigned the native name of a New Zealand mountain bird. Named by New Zealand Geographic Board (NZGB), 2000.

Rutgers Glacier is a steep glacier on the west side of the Royal Society Range in the Ross Dependency, Antarctica. Rutgers Glacier descends southwest from Johns Hopkins Ridge and Mount Rucker to enter the Skelton Glacier. Abbott Spur separates the lower ends of Rutgers Glacier from Allison Glacier.

Vella Flat is a coastal flat to the south of Lake Cole in the northwest part of Black Island, Ross Archipelago. It was named by the Advisory Committee on Antarctic Names (US-ACAN) (1999) after Professor Paul Vella, Department of Geology, Victoria University of Wellington, who made a reconnaissance survey of Brown Peninsula and Black Island stratigraphy with the Victoria University of Wellington Antarctic Expedition (VUWAE), 1964–65.