Williams began playing piano at age 13 and settled on trumpet soon afterwards; he may have played with pianist/singer Cow Cow Davenport while still a teenager. In the 1930s he played in the territory bands Trianon Crackerjacks and Brown Skin Models, and acted as musical director for the Dixie Rhythm Girls. Around 1940 he left Alabama for Philadelphia, where he played with Tiny Bradshaw's band before joining the U.S. Army during World War II.

After the war Billy Eckstine hired Williams, and following this he worked with John Kirby and pianist Billy Kyle. In 1949 he began the first of several stints with Duke Ellington, who bestowed upon him the nickname "Cadillac". In 1951 he left Ellington's employ and moved to Paris, where he led his own bands and recorded for French labels. He returned to Ellington in 1956, and played with him again in 1969 on a tour of Europe. [1] He settled in the Netherlands, and died in 1973.

Edward Kennedy "Duke" Ellington was an American composer, pianist, and leader of a jazz orchestra, which he led from 1923 until his death over a career spanning more than six decades. 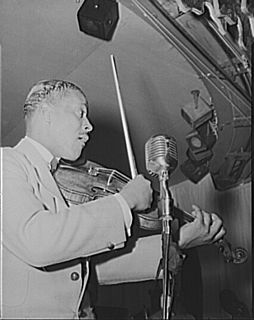 Ray Willis Nance was a jazz trumpeter, violinist and singer. He is best remembered for his long association with Duke Ellington and his orchestra. 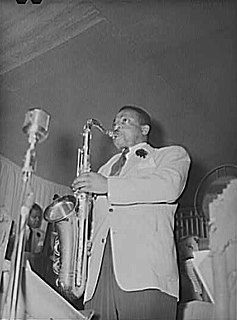 Benjamin Francis Webster was an American jazz tenor saxophonist. He is considered one of the three most important "swing tenors" along with Coleman Hawkins and Lester Young. Known affectionately as "The Brute" or "Frog", he had a tough, raspy, and brutal tone on stomps, yet on ballads he played with warmth and sentiment. He was indebted to alto saxophonist Johnny Hodges, who, he said, taught him to play his instrument.

The Mills Blue Rhythm Band was an American big band of the 1930s.

Rex William Stewart Jr. was an American jazz cornetist who was a member of the Duke Ellington orchestra. 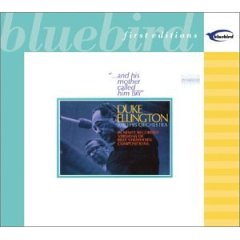 ...And His Mother Called Him Bill is a studio album by Duke Ellington recorded in the wake of the 1967 death of his long-time collaborator, Billy Strayhorn. It won the Grammy Award for Best Large Jazz Ensemble Album in 1969.

Russell Procope, was an American clarinetist and alto saxophonist who was a member of the Duke Ellington orchestra.

William Alonzo "Cat" Anderson was an American jazz trumpeter known for his long period as a member of Duke Ellington's orchestra and for his wide range, especially his ability to play in the altissimo register.

Mercer Kennedy Ellington was an American musician, composer, and arranger. His father was Duke Ellington, whose band Mercer led for 20 years after his father's death, and from whose musical shadow he rarely strayed. 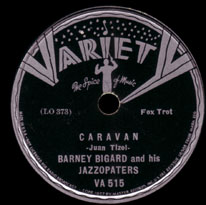 "Caravan" is an American jazz standard that was composed by Juan Tizol and Duke Ellington and first performed by Ellington in 1936. Irving Mills wrote lyrics, but they are rarely sung. The exotic sound of "Caravan" interested exotica musicians; Martin Denny, Arthur Lyman, and Gordon Jenkins all covered it. Woody Allen used the song in two of his films, Alice and Sweet and Lowdown. Steven Soderbergh used the Lyman version in his 2001 film Ocean's Eleven. The song appears often in the 2014 film Whiplash as an important plot element. The Mills Brothers recorded an a cappella version in which they imitated instruments with their voices. Johnny Mathis recorded the song in 1956. More than 350 versions have been recorded. 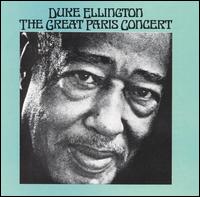 William Mitchell Byers was an American jazz trombonist and arranger. 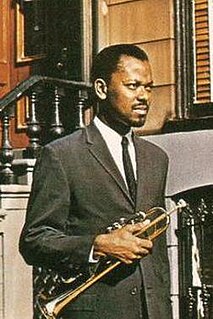 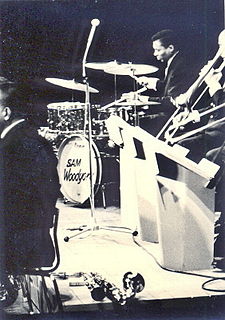 The Ellington Suites is an album by American pianist, composer, and bandleader Duke Ellington which collects three suites recorded in 1959, 1971, and 1972 released on the Pablo label in 1976. The album won a Grammy Award for Best Jazz Performance by a Big Band in 1976. Ellington and Billy Strayhorn wrote "The Queen's Suite" for Queen Elizabeth II who was presented with a single pressing of the recording, which was not commercially issued during Ellington's lifetime.

Masterpieces by Ellington is the first LP album by American pianist, composer, and bandleader Duke Ellington, recorded for the Columbia label in 1950. It was one of the earliest 12-inch LPs to take advantage of the extended time available and consisted of four tracks, three of them "concert arrangements" of Ellington standards and one, "The Tattooed Bride," a recent tone poem.