New Jersey State Federation of Women's Clubs (NJSFWC) was founded in 1894 and is currently located in New Brunswick, New Jersey. [1] NJSFWC is the largest volunteer women's service organization in the state of New Jersey [2] and a member of the General Federation of Women's Clubs. [2] There are approximately 8,000 members in 200 clubs located throughout New Jersey. [1] They provide opportunities for women with education, leadership training, and community service through participation in local clubs. In 1918, the NJSFWC founded the New Jersey College for Women (now Douglass Residential College), and offers scholarships to Douglass students.

New Brunswick is a city in Middlesex County, New Jersey, United States, in the New York City metropolitan area. The city is the county seat of Middlesex County, and the home of Rutgers University. New Brunswick is on the Northeast Corridor rail line, 27 miles (43 km) southwest of Manhattan, on the southern bank of the Raritan River. As of 2016, New Brunswick had a Census-estimated population of 56,910, representing a 3.1% increase from the 55,181 people enumerated at the 2010 United States Census, which in turn had reflected an increase of 6,608 (+13.6%) from the 48,573 counted in the 2000 Census. Due to the concentration of medical facilities in the area, including Robert Wood Johnson University Hospital and Saint Peter's University Hospital, as well as Rutgers, The State University of New Jersey's Robert Wood Johnson Medical School, New Brunswick is known as both the Hub City and the Healthcare City. The corporate headquarters and production facilities of several global pharmaceutical companies are situated in the city, including Johnson & Johnson and Bristol-Myers Squibb.

New Jersey is a state in the Mid-Atlantic and Northeastern regions of the United States. It is located on a peninsula, bordered on the north and east by the state of New York, particularly along the extent of the length of New York City on its western edge; on the east, southeast, and south by the Atlantic Ocean; on the west by the Delaware River and Pennsylvania; and on the southwest by the Delaware Bay and Delaware. New Jersey is the fourth-smallest state by area but the 11th-most populous, with 9 million residents as of 2017, and the most densely populated of the 50 U.S. states; its biggest city is Newark. New Jersey lies completely within the combined statistical areas of New York City and Philadelphia. New Jersey was the second-wealthiest U.S. state by median household income as of 2017.

The General Federation of Women's Clubs (GFWC), founded in 1890 during the Progressive Movement, is a federation of over 3,000 women's clubs in the United States which promote civic improvements through volunteer service. Many of its activities and service projects are done independently by local clubs through their communities or GFWC's national partnerships. GFWC maintains nearly 100,000 members throughout the United States and internationally. GFWC remains one of the world's largest and oldest nonpartisan, nondenominational, women's volunteer service organizations. 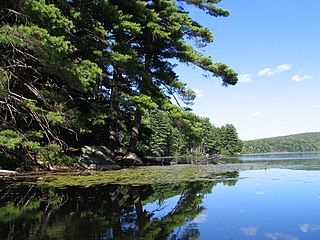 Palisades Interstate Park and its governing body, the Palisades Interstate Park Commission, was formed under an interstate compact in 1900 by governors Theodore Roosevelt of New York and Foster M. Voorhees of New Jersey in response to the destruction of the Palisades by quarry operators in the late 19th century. The Palisades are the cliffs on the west bank of the Hudson River across from and continuing north of Manhattan Island. The commission consists of ten commissioners, five appointed by each governor, who serve staggered five-year terms.

The Palisades, also called the New Jersey Palisades or the Hudson River Palisades, are a line of steep cliffs along the west side of the lower Hudson River in Northeastern New Jersey and Southeastern New York in the United States. The cliffs stretch north from Jersey City about 20 miles (32 km) to near Nyack, New York, and visible at Haverstraw, New York. They rise nearly vertically from near the edge of the river, and are about 300 feet high at Weehawken, increasing gradually to 540 feet high near their northern terminus. North of Fort Lee, the Palisades are part of Palisades Interstate Park and are a National Natural Landmark.

The New Jersey Library Association (NJLA) is a library organization located in Trenton, New Jersey. It was established in 1890, and is the oldest library organization in the State of New Jersey. The NJLA began in 1890 with 39 members, and currently has over 1,700. The organization states on its website that it "advocates for the advancement of library services for the residents of New Jersey, provides continuing education & networking opportunities for librarians", and "supports the principles of intellectual freedom & promotes access to library materials for all". 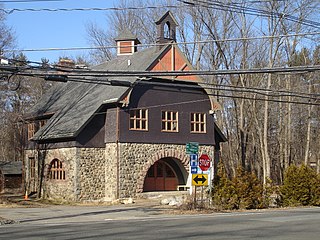 The New York–New Jersey Trail Conference (NYNJTC) is a volunteer-based federation of approximately 10,000 individual members and about 100 member organizations. The conference coordinates the maintenance of 2,000 miles of foot trails around the New York metropolitan area, from the Delaware Water Gap, north to beyond the Catskill Mountains, including the Appalachian Trail through New York and New Jersey. It also works to protect open space and publishes books and trail maps. The organization's headquarters are at 600 Ramapo Valley Road, Mahwah, New Jersey.

Douglass Residential College, a school part of Rutgers University, is an innovative undergraduate higher education institution specifically for women. It succeeded the liberal arts Douglass College after it was merged with the other undergraduate liberal arts colleges at Rutgers to form the School of Arts and Sciences in 2007. Female students enrolled at any of the academic undergraduate schools at Rutgers–New Brunswick, including, e.g., the School of Arts and Sciences, School of Engineering, School of Environmental and Biological Sciences, School of Pharmacy, Mason Gross School of the Arts, may now also enroll in Douglass Residential College, at which they must satisfy additional requirements specific to the college. Douglass seeks to provide the benefits of a close-knit small community of women students and offers programs specially designed to help women students to identify their unique abilities and develop confidence. These programs include, for example, a strong emphasis on global education, including opportunities to participate in service/learning trips in foreign countries, and a wide range of training and enrichment activities offered by a career and leadership development center.

National Teen Age Republicans (TARs) is the youth wing of the United States Republican Party. Its aim is to provide support to the party and its candidates. Members work to perform community service, and learn about the political processes at local, state and national level. 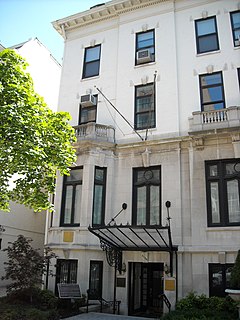 The General Federation of Women's Clubs Headquarters, also known as the Miles Mansion, is a social clubhouse headquarters in Washington, D.C.. Built as a private residence in 1875, it has served as the headquarters of the General Federation of Women's Clubs (GFWC) since 1922. It was declared a National Historic Landmark in 1991 for its association with the federation, which serves as an umbrella organization for women's clubs, a social movement dating to the mid-19th century. Tours of the headquarters, available by appointment, provide information about the activities of the GFWC and several historic rooms, including the 1734 entryway, the Julia Ward Howe Drawing Room, the dining room, music room and the GFWC International President's office. The headquarters also features changing exhibits of art, photographs and artifacts from its collections. 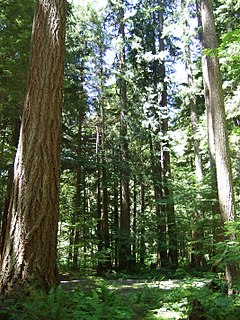 Federation Forest State Park is a 619-acre (251 ha) Washington state park on the White River in King County. The park is located 15 miles (24 km) east of Enumclaw on Route 410 about 30 miles (48 km) below the summit of Chinook Pass. The park features an old-growth forest that includes Douglas fir, western hemlock, Sitka spruce, and western redcedar trees. Park amenities include 7 miles (11 km) of hiking trails, picnicking facilities, and an interpretive center.

The Atlanta Woman’s Club is one of oldest non-profit woman’s organizations in Atlanta, organized November 11, 1895. It is a 501(c)3 non-profit philanthropic organization made up of professional women of all ages, races and religions.

Gertrude M. Clarke is a former educator who primarily taught high school physics and nucleonics, also extensively engaged in nuclear physics research. She founded the New Jersey Business/Industry/Science Education Consortium and served as its Executive Director from 1981 until 1999. She has been on the Board of Trustees of the New Jersey Inventors Hall of Fame for sixteen years, and President Emeritus since 2012.. 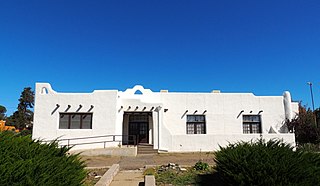 The Silver City Woman's Club is a historic women's club located at 411 Silver Heights Boulevard in Silver City, New Mexico. The club was founded in 1909, and it built its meeting house in 1935-36. Richard Tatsch designed the clubhouse in the Pueblo Revival style, which reflected the region's architectural history. The clubhouse provided two spaces for the club's community activities and private meetings; the former included distributing food to needy families and conducting child welfare inspections on behalf of the state, while the latter included self-improvement courses in music and literature. The women's club has continuously held its activities in the building since its construction; it has also provided a space for community meetings and large events.

The Thursday Morning Club, or TMC, is a not for profit, social and philanthropic organization founded in 1896 in Madison, New Jersey and provides childcare services, assistance programs for women, and provides low-cost event venue space for other non-profits in Madison, New Jersey and its surrounding communities. Their stated mission is "...providing programs and projects" promoting "...women’s health, preserving natural resources, promoting literacy and equality, and ... volunteer service".

Charlotte Emerson Brown was an American woman notable as the creator and first president of the General Federation of Women's Clubs (GFWC), a progressive women's movement in America beginning in the 1890s. During her presidency, membership expanded quickly from 50 cultural clubs to several hundred, and grew to representing tens of thousands of women. She was instrumental in the GFWC's formation of state-level organizations. 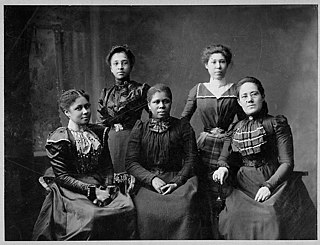 The woman's club movement was a social movement that took place throughout the United States. While women's organizations had always been a part of United States history, it was not until the Progressive era that it came to be considered a "movement." The first wave of the club movement during the Progressive era was started by white, middle-class, Protestant women and a second phase by African-American women.

The Woman's Era Club was an African-American women's civic organization founded in Boston, Massachusetts, in between 1892 and 1894 by Josephine St. Pierre Ruffin. The Club was the first black women's club in Boston. The organization was especially well-known for the conflict caused when Ruffin attempted to desegregate the General Federation of Women's Clubs (GFWC) in 1900.

Dr. Rosa Slade Gragg was a United-States-based activist and politician. She founded the first black vocational school in Detroit, Michigan; and was the advisor to three United States presidents. She was inducted in 1987 into the Michigan Women's Hall of Fame.

The Carrizozo Woman's Club, at 908 Eleventh St., Carrizozo, New Mexico is a woman's club. Its building was constructed in 1939 and was listed on the National Register of Historic Places in 2003.

The Federation of Women's Clubs for Oklahoma and Indian Territories was formed in May, 1898. The motto selected for the organization was "Kindliness and Helpfulness". The first president was Sophia Julia Coleman Douglas.