The scope of the PAL region varies with systems and publishers. The following countries and areas are normally included in a PAL region release:

During the mid-1990s, the practice of modifying consoles such as the Super NES and Mega Drive to allow 60 Hz operation became somewhat common among PAL gamers, due to the rise in NTSC/60 Hz capable PAL TVs and the relatively simple nature of the modifications. Beginning with the Amiga CD32, which introduced more powerful hardware, developers had the ability to output at full PAL resolution without borders or stretching, although games still typically ran slower and all ran at 50 Hz. Beginning with the Dreamcast and continuing through the sixth generation of consoles, developers began including PAL60 modes in their games. Games that run at PAL60 are produced with the same colour encoding system as 50 Hz PAL signals, but with the NTSC resolution and field rate of 60 Hz, providing an identical gaming experience to their NTSC counterparts, however some games, such as Tekken 4 and Tekken 5, will actually use the NTSC color mode when in 60 Hz mode; these games will appear in black and white on PAL-only televisions. Brazil's PAL-M always operates in 60 Hz.

Games ported to PAL have historically been known for having game speed and frame rates inferior to their NTSC counterparts. Since the NTSC standard is 60 fields/30 frames per second but PAL is 50 fields/25 frames per second, games were typically slowed by approximately 16.7% in order to avoid timing problems or unfeasible code changes. FMV rendered and encoded at 30 frames per second by the Japanese/US (NTSC) developers was often down-sampled to 25 frames per second or considered to be 50 frames per second video for PAL release—usually by means of 3:2 pull-down, resulting in motion judder. In addition to this, PAL's increased resolution was not utilised during conversion, creating a pseudo letterbox effect with borders top and bottom, which looks similar to a 14:9 letterbox, and leaving the graphics with a slightly squashed look due to an incorrect aspect ratio caused by the borders. This was especially prevalent during previous generations [ which? ] when 2D graphics were used almost exclusively. The gameplay of many games with an emphasis on speed, such as the original Sonic the Hedgehog for the Sega Genesis/Mega Drive, suffered in their PAL incarnations.

Despite the possibility and popularity of 60 Hz PAL games, many high-profile games, particularly for the PlayStation 2 console, were released in 50 Hz-only versions. Square Enix have long been criticised by PAL gamers for their poor PAL conversions. Final Fantasy X runs in 50 Hz mode only, and 16.7% slower and bordered that while prevalent in previous generations was considered inexcusable at the time of release. [1] In contrast, the Dreamcast was the first system to feature PAL60, and the overwhelming majority of PAL games offered 50 and 60 Hz modes with no slowdown. The Xbox too featured a system-wide PAL60 option in the Dashboard, with almost every game supporting PAL60. Seventh generation PAL consoles Xbox 360, PlayStation 3 and Wii also feature system-wide 60 Hz support.[ citation needed ]]

As of the eighth generation, consoles such as the Wii U, PlayStation 4, Xbox One and Nintendo Switch have all games solely in 60 Hz, with 50 Hz only being used for video playback and, in the Wii U's case, backwards compatibility with Wii and Virtual Console games.[ citation needed ]

However, this problem does not occur in Brazil's PAL-M since it is mostly based on the NTSC standard (with its frame rate operating at nearly 30 frames per second) but not on the encoding of the color carrier which is similar to that of PAL.[ citation needed ]

A regional lockout is a class of digital rights management preventing the use of a certain product or service, such as multimedia or a hardware device, outside a certain region or territory. A regional lockout may be enforced through physical means, through technological means such as detecting the user's IP address or using an identifying code, or through unintentional means introduced by devices only supporting certain regional technologies.

576i is a standard-definition video mode originally used for terrestrial television in most countries of the world where the utility frequency for electric power distribution is 50 Hz. Because of its close association with the color encoding system, it is often referred to as simply PAL, PAL/SECAM or SECAM when compared to its 60 Hz NTSC-color-encoded counterpart, 480i. In digital applications it is usually referred to as "576i"; in analogue contexts it is often called "625 lines", and the aspect ratio is usually 4:3 in analogue transmission and 16:9 in digital transmission.

1080p is a set of HDTV high-definition video modes characterized by 1,920 pixels displayed across the screen horizontally and 1,080 pixels down the screen vertically; the p stands for progressive scan, i.e. non-interlaced. The term usually assumes a widescreen aspect ratio of 16:9, implying a resolution of 2.1 megapixels. It is often marketed as Full HD or FHD, to contrast 1080p with 720p resolution screens. 1080p can sometimes also be informally referred to as 2K. 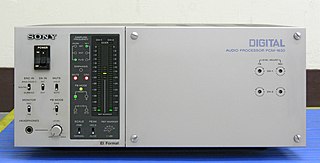 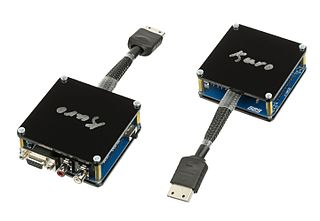 The Dreamcast VGA Box is an accessory for Sega's Dreamcast video game console that allows it to connect to a video display such as a computer monitor or an HDTV set through a VGA port. Because the Dreamcast hardware can produce a VGA-compatible video signal natively, this connection provides improved picture quality compared to standard composite video or S-Video connections, along with support for progressive scan video.

High Definition (HD) television describes a television system providing an image resolution of substantially higher resolution than the previous generation of technologies. The term has been used since 1936, but in modern times refers to the generation following standard-definition television (SDTV), often abbreviated to HDTV or HD-TV. It is the current standard video format used in most broadcasts: terrestrial broadcast television, cable television, satellite television, Blu-ray Discs, and the only difference is the picture quality of SD and HD. Prior to this, respective SD versions of the channels transmitted in 4:3 video with letterbox on it, making the image appears smaller.