Peter Stein (born 1 October 1937) is a German theatre and opera director who established himself at the Schaubühne am Lehniner Platz, a company that he brought to the forefront of German theatre. [1]

Born in Berlin, Stein grew up in an era defined by the Nazis. His father, Herbert Stein, was factory director of Alfred Teves, a motorcycle manufacturing firm that the Nazi regime employed to make automotive parts. Herbert was in charge of 250,000 forced laborers. He was also involved in the Confessing Church, a resistance group.

Stein has said that these events had a profound effect on his life. After the war, his father was sentenced to two years of forced labor for collaborating with the Nazis. Stein's academic performance nosedived and he barely made it into Frankfurt University. He then moved to Munich and enrolled at university there, pursuing a PhD thesis on the works of E. T. A. Hoffmann.

Having been curious about the theatre since his time in Frankfurt, he became a stagehand in Munich and eventually earned other parts. Proving himself, he was hired as director for Saved by Edward Bond. This piece threw him into the limelight and was critically acclaimed. Politically driven, Stein went on to direct many politically charged pieces, including Vietnam-Discourse by Peter Weiss, Bond's Early Morning , Seán O'Casey's Cock-a-Doodle Dandy , The Changeling by Thomas Middleton, and William Rowley and Goethe's Torquato Tasso .

The theatre where Stein originally worked in West Berlin was the Schaubühne am Halleschen Ufer  [ de ].

In 1970, Stein was selected by politicians in Berlin to take over the Schaubühne, running it as an egalitarian socialist democracy.

After the end of his relationship with partner Jutta Lampe in 1985, Stein left the Schaubühne.

Stein has also directed operas, such as Rheingold in Paris, 1976 (conducted by Georg Solti); Otello for the Welsh National Opera in 1987; and Moses und Aron for the Salzburg Festival, 1996 (conducted by Pierre Boulez). In 2011, he directed a new production of Verdi's Macbeth for the Salzburg Festival, with Riccardo Muti conducting, and in 2013 he directed Verdi's Don Carlos in Salzburg. He was awarded the Europe Theatre Prize in 2008. [2] He is married to Italian actress Maddalena Crippa. [3]

In 2019, Stein directed a production of Le Misanthrope with Lambert Wilson at the Le Comédia  [ fr ] theatre in Paris. [4]

Productions without a specified location were at the Schaubühne Berlin. [5]

Kabale und Liebe by Friedrich Schiller at the Theater Bremen, with Michael König  [ de ] as Ferdinand, Edith Clever as Luise, Jutta Lampe as Lady Milford, Kurt Hübner as the President, and Bruno Ganz as Wurm. [6]

Vietnam-Discourse by Peter Weiss, co-directed with Wolfgang Schwiedrzik  [ de ], at the Werkraumtheater of the Munich Kammerspiele, with Wolfgang Neuss as the Compère. [6]

The Mother by Bertolt Brecht

Simon Boccanegra by Giuseppe Verdi (at the Salzburg Easter Festival)

Jürgen Flimm is a German theater and opera director, and theater manager. After establishing himself as one of the exponents of Regietheater, Flimm was called to manage renowned theaters and festivals. His operatic productions in Germany led to an international career, with operas staged in the Netherlands, Austria, Switzerland, England, Italy, and the United States. 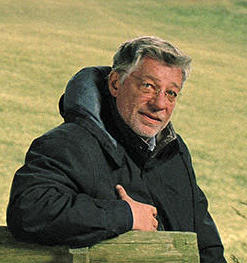 Botho Strauß is a German playwright, novelist and essayist.

The Schaubühne am Lehniner Platz is a famous theatre in the Wilmersdorf district of Berlin, located on the Kurfürstendamm boulevard. It is a conversion of the Universum cinema, built according to plans designed by Erich Mendelsohn in 1928.

Rüdiger Hacker is a German actor, radio play narrator and director. Rüdiger Hacker is one of the founding members of the Hall Schaubühne am Ufer in Berlin. He had theatrical engagements at Munich's Volkstheater, the Munich Kammerspiele, the Thalia Theater in Hamburg, Düsseldorf Schauspielhaus and the Salzburg Festival. Today Rüdiger Hacker is an ensemble member at the National Theater in Mannheim.

Teatro da Cornucópia is a theatre company in Portugal founded in 1973 by Jorge Silva Melo and Luís Miguel Cintra with the staging of the play The Misanthrope by Molière. The theatre is located at the Teatro do Bairro Alto, Rua Tenente Raul Cascais, Lisbon.

Dieter Dorn is a German theatre director, also for the opera, the manager of the Münchner Kammerspiele from 1983 to 2001 and now manager of the Bavarian Staatsschauspiel. 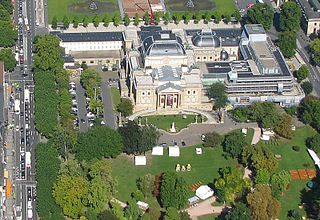 The Internationale Maifestspiele Wiesbaden is a theater festival in Wiesbaden, Germany. Established in the late 19th century after the Bayreuth Festival, the festival is one of the most distinguished international theatre and music festivals in the world. It is presented annually in May at the Hessisches Staatstheater Wiesbaden, the State Theatre of Hesse in the capital Wiesbaden. The festival currently features performances of operas, ballets, plays and musicals. Visiting companies, mostly from European theaters, present their recent productions along with performances of the Theater Wiesbaden. Concerts from a wide array of music genres are featured as well as artistic circus acts and modern dance presentations. Lectures, recitals, cabaret performances, art showings and readings are also part of the program.

Jutta Lampe was a German actress on stage and in film. She was for 30 years a leading actress at the Schaubühne founded in Berlin by her husband Peter Stein, where she played both classical theatre such as Alkmene in Kleist's Amphitryon, and world premieres including Robert Wilson's Orlando for one actor, and roles that Botho Strauß created for her. She was also engaged at the Vienna Burgtheater and the Schauspielhaus Zürich. She appeared in more than twenty films from 1963, including lead roles in films by Margarethe von Trotta. Lampe was named Actress of the Year by Theater heute several times. Other awards included the Gertrud-Eysoldt-Ring and the Joana Maria Gorvin Prize for her life's work.

The Park is a 1983 play by the German writer Botho Strauß. It is loosely based on William Shakespeare's A Midsummer Night's Dream, with the characters moved to a contemporary German city.

Günter Krämer is a German stage director, especially for opera, and a theatre manager who has staged internationally.