A preacher is someone who preaches sermons.

Preacher or Preachers may also refer to:

Preacher is an American comic book series published by Vertigo, an imprint of DC Comics. The series was created by writer Garth Ennis and artist Steve Dillon with painted covers by Glenn Fabry. 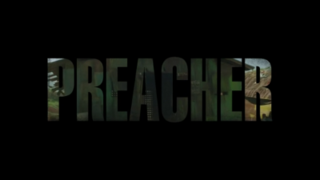 Preacher is an American television series developed by Sam Catlin, Evan Goldberg, and Seth Rogen for AMC starring Dominic Cooper, Joseph Gilgun and Ruth Negga. It is based on the comic book series Preacher created by Garth Ennis and Steve Dillon, and published by DC Comics' Vertigo imprint. The series was officially picked up on September 9, 2015, with a ten-episode order which premiered on May 22, 2016. The series has been renewed for a fourth and final season, which is set to premiere on August 4, 2019.

Ecclesiastes is one of 24 books of the Tanakh or Hebrew Bible, where it is classified as one of the Ketuvim. Originally written c. 450–200 BCE, it is also among the canonical Wisdom Books in the Old Testament of most denominations of Christianity. The title Ecclesiastes is a Latin transliteration of the Greek translation of the Hebrew Kohelet, the pseudonym used by the author of the book.

Geoffrey Lloyd Preacher (1882–1972) was an architect prominent in Atlanta, Georgia and the southeastern United States in the design of commercial office, hotel, and apartment buildings.

Ginger is a delicacy, medicine, or cooking spice made from the stem of the plant Zingiber officinale.

Bliss may refer to:

Jane may refer to:

A boy is a human male child or young man.

Wizard, the wizard, or wizards and the female counterparts wizardess or wizardesses may refer to:

Bird of prey refers to several species of carnivorous birds.

Madhouse may refer to:

A dune is a hill of sand.

Blood is a biological fluid found in animals.

Cupid is the god of love in Roman mythology.

A revolver is a type of firearm.

A tribe is a clan-based social structure. Tribe, tribes or the Tribe may also refer to:

Air is the name given to the Earth's atmosphere.

Crows are birds of the genus Corvus, which includes jackdaws, ravens, and rooks.