Puno or PUNO may refer to: 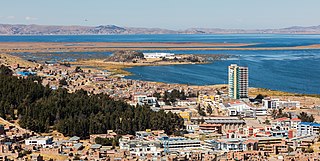 Puno is a city in southeastern Peru, located on the shore of Lake Titicaca. It is the capital city of the Puno Region and the Puno Province with a population of approximately 140,839. The city was established in 1668 by viceroy Pedro Antonio Fernández de Castro as capital of the province of Paucarcolla with the name San Juan Bautista de Puno. The name was later changed to San Carlos de Puno, in honor of king Charles II of Spain. Puno has several churches dating back from the colonial period; they were built to service the Spanish population and evangelize the natives.

Puno District is one of fifteen districts of the Puno Province in the Puno Region of Peru. Its seat is Puno.

Puno is a province in the Puno Region, in southeastern Peru. It borders the provinces of Huancane, San Román, El Collao and the Moquegua Region's province of General Sánchez Cerro. Its capital is the city of Puno, which is located at the edge of Lake Titicaca, the world's highest navigable lake. It is the economic powerhouse of the region.

The Puno family is a Philippine family of prominent precolonial Pampangan origin.

The recorded history of the Philippines begins with the creation of the Laguna Copperplate Inscription (LCI) in 900, the first written document found in an ancient Philippine language. The inscription itself identifies the date of its creation, and on its deciphering in 1992 moved the boundary between Philippine history and prehistory back 600 years. The Philippines is classified as part of the Indosphere and the Sinosphere, making its many cultures sophisticated and intermixed. Prior to the LCI, the earliest record of the Philippine Islands corresponded with the arrival of Ferdinand Magellan in 1521. Magellan's arrival marks the beginning of the Spanish colonial period.

Práxedes Fajardo y Puno was a Philippine revolutionary and head of the Pampangan section of the Philippine Red Cross during the anticolonial armed struggles against Spain and the United States. 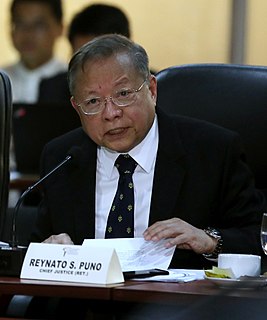 Reynato Puno y Serrano is the 22nd Chief Justice of the Supreme Court of the Philippines. Appointed on December 8, 2007 by President Gloria Macapagal Arroyo. He served until his mandatory retirement on May 17, 2010. Puno had initially been appointed to the Supreme Court as an Associate Justice on June 28, 1993. 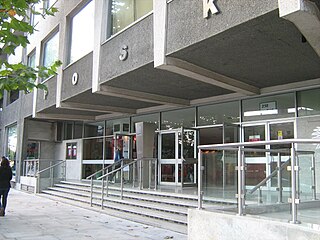 In 1985, the Fugitive Investigative Strike Team VIII, part of the United States Marshals Service, set up Puño Airlines, a front organization to lure wanted criminals into the open where they could be arrested – by sending a letter suggesting the fugitive had won a free flight, a weekend in the Bahamas, and $350 in spending money. In total, 200 fugitives were sent the offer, and 14 were arrested after showing up to claim their winnings.

Acora District is one of fifteen districts of the Puno Province in the Puno Region, Peru. 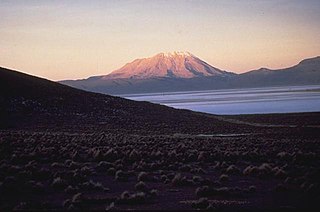 The General Sánchez Cerro Province is the smallest of three provinces in the Moquegua Region of Peru. The capital of the province is Omate. The province was named after the former Peruvian army officer and president Luis Miguel Sánchez Cerro.

Carabaya Province is a province of the Puno Region in the southern part of Peru. It is bounded on the north by the Madre de Dios Region, on the east by the Sandia Province, on the south by the provinces of Azángaro, Melgar and Putina and on the west by the Cusco Region. The capital of the province is the city of Macusani.

Zepita is one of seven districts of the Chucuito Province in Puno Region, Peru.

Capazo District is one of five districts of the province El Collao in Puno Region, Peru.

Sina District is one of five districts of the San Antonio de Putina Province in the Puno Region of Peru.

Mallkuamaya is an archaeological site in Peru. It is located in the Puno Region, Puno Province, Puno District, about 15 km southwest of Puno. The site was declared a National Cultural Heritage (Patrimonio Cultural) of Peru by the National Institute of Culture.

Inka Tunuwiri is an archaeological site in Peru. It is located in the Puno Region, Puno Province, between the districts Chucuito and Puno, southeast of the village Ichu. Inka Tunuwiri was declared a National Cultural Heritage (Patrimonio Cultural) of Peru by the National Institute of Culture.

Cutimbo is an archaeological site with stone tombs (chullpa) and cave paintings in Peru.

Yanawara may refer to:

Llusca Ritti or Ayachincana is a mountain in the Vilcanota mountain range in the Andes of Peru, approximately 5,200 metres (17,060 ft) high. It is located in the Cusco Region, Quispicanchi Province, Marcapata District, and in the Puno Region, Carabaya Province, Ollachea District. Llusca Ritti lies south of Sullulluni and northwest of Jori Pintay.