Sir Robert Hales (c. 1325 – 14 June 1381) was Grand Prior of the Knights Hospitaller of England, Lord High Treasurer, and Admiral of the West. He was killed in the Peasants' Revolt.

In 1372 Robert Hales became the Lord/Grand Prior of the Knights Hospitallers of England. Richard II appointed him Lord High Treasurer, [1] so he was responsible for collecting the hated poll tax. He was appointed Admiral of the West from 24 November 1376 – 24 November 1377. [2] He was beheaded on 14 June 1381 on Tower Hill during the Peasants Revolt. His estate and assets were inherited by his brother, Sir Nicholas de Hales, the progenitor of many prominent English Hales families. Robert Hales was present at many latter-day crusader expeditions and is recorded as leading a contingent of hospitaller knights at the sacking of Alexandria.

Hales was described by the chronicler Thomas Walsingham as a "Magnanimous knight, though the Commons loved him not".

He was the son of Nicholas Hales and his brother was Sir Nicholas de Hales, who inherited his father's estates in Kent. [1] [3]

Year 1381 (MCCCLXXXI) was a common year starting on Tuesday of the Julian calendar. 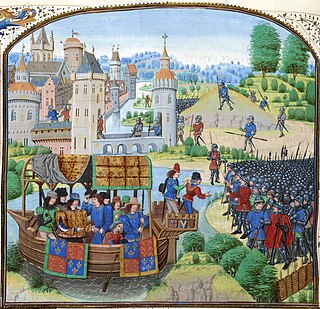 The Peasants' Revolt, also named Wat Tyler's Rebellion or the Great Rising, was a major uprising across large parts of England in 1381. The revolt had various causes, including the socio-economic and political tensions generated by the Black Death in the 1340s, the high taxes resulting from the conflict with France during the Hundred Years' War, and instability within the local leadership of London. 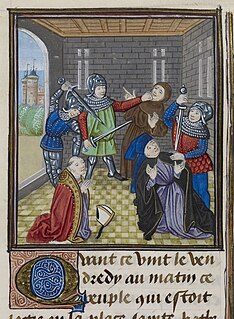 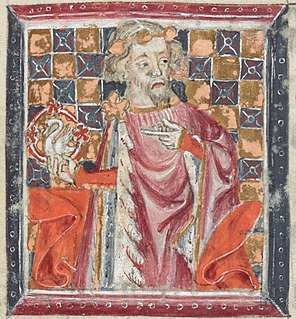 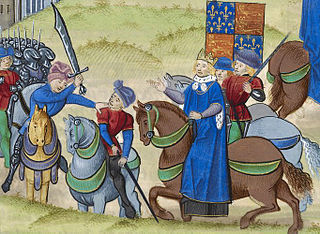 WatTyler was a leader of the 1381 Peasants' Revolt in England. He led a group of rebels from Canterbury to London to oppose the institution of a poll tax and to demand economic and social reforms. While the brief rebellion enjoyed early success, Tyler was killed by officers loyal to King Richard II during negotiations at Smithfield, London.

Thomas Howard, 1st Earl of Suffolk, of Audley End House, was a member of the House of Howard and a son of Thomas Howard, 4th Duke of Norfolk by his second wife Margaret Audley, Duchess of Norfolk, the daughter and heiress of the 1st Baron Audley of Walden.

Sir Simon de Burley, KG was holder of the offices of Lord Warden of the Cinque Ports and Constable of Dover Castle between 1384–88, and was a Knight of the Garter. 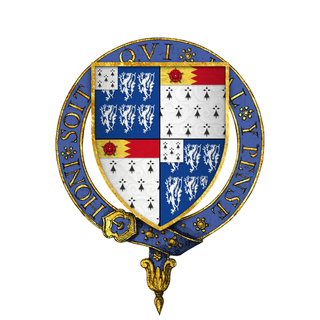 Sir Thomas Cheney KG of the Blackfriars, City of London and Shurland, Isle of Sheppey, Kent, was an English administrator and diplomat, Lord Warden of the Cinque Ports in south-east England from 1536 until his death. 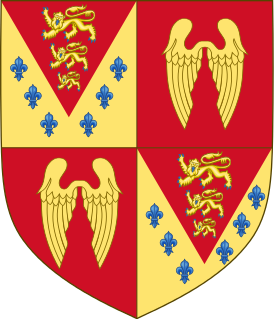 Tunstall is a linear village and civil parish in Swale in Kent, England. It is about 2 km to the south-west of the centre of Sittingbourne, on a road towards Bredgar.

Sir Hugh Segrave or Seagrave was a Lord Keeper of the Great Seal and Treasurer of England under Richard II of England.

Sir Maurice Denys (1516–1563) of Siston Court, near Bristol, Gloucestershire, and of St John's Street, Clerkenwell, Middlesex, was an English lawyer and property speculator during the Dissolution of the Monasteries, at which time he served as a "powerful figure at the Court of Augmentations". He served as a Member of Parliament for Malmesbury in Wiltshire and as Treasurer of Calais. He was the builder of Siston Court in Gloucestershire, which survives largely unaltered since his time. His excessive speculation and borrowing caused the ruination of the Siston branch of the Denys family.

John Rawson, 1st and only Viscount Clontarf was an English-born statesman in sixteenth-century Ireland, and was regarded as one of the mainstays of English rule in the Kingdom of Ireland. He was the last Prior of the Kilmainham house of the Order of St. John of Jerusalem. The Knights Hospitaller, as they were usually known, were a fighting order of monks, and Rawson himself was an experienced soldier who took part in the Siege of Rhodes (1522). Despite taking holy orders, he was not celibate, and he fathered several illegitimate children. At the Reformation, with no apparent reluctance, he surrendered all his Order's properties to the English Crown in return for a pension and the title of viscount.