Ryu Hyun-woo may refer to: 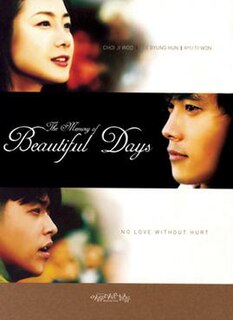 Beautiful Days is a 2001 South Korean television drama series starring Lee Byung-hun, Choi Ji-woo, Ryu Si-won and Lee Jung-hyun. The drama is the first entry in director Lee Jang-soo's Heaven Trilogy which includes Stairways to Heaven in 2003 and Tree of Heaven in 2006. It aired on SBS from March 14 to May 31, 2001 on Wednesdays and Thursdays at 21:55 for 24 episodes.

Save the Last Dance for Me is a 20-episode South Korean television series that aired on SBS from October 23, 2004 to January 2, 2005 on Saturdays and Sundays at 21:45. Starring Eugene, Ji Sung, Ryu Soo-young and Lee Bo-young. The drama revolves around two lovers who don't let amnesia get in the way of their romance.

Yu is the English transcription of several Korean surnames written as 유 or 류 in Hangul. Some of the family names written as Yoo are derived from the Chinese surnames 劉 or 柳 (Liu) and 兪 (Yu). As of 2000, roughly a million people are surnamed Yoo in South Korea, making up approximately 2% of the population. Of those, the most common is Ryu, with more than six hundred thousand holders, whereas Yu accounts for about one hundred thousand.

Love in 3 Colors is a 1999 South Korean television drama series produced and broadcast by KBS starring Choi Ji-woo, Ryu Jin, Lee Hwi-hyang and Park Jin-hee. It premiered on KBS2 on May 9, 1999 and ended on November 14, 1999, airing every Saturday and Sunday at 20:00 for 56 episodes.

Hyun-jin Ryu is a South Korean professional baseball pitcher for the Toronto Blue Jays of Major League Baseball (MLB). He previously played in MLB for the Los Angeles Dodgers and in the KBO League for the Hanwha Eagles.

South Korea participated in the 2006 Asian Games in Doha, Qatar on 1 – 15 December 2006. South Korea ranked 2nd with 58 gold medals in this edition of the Asiad. 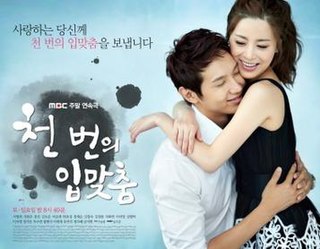 A Thousand Kisses is a 2011 South Korean television series, starring Seo Young-hee, Ji Hyun-woo, Ryu Jin and Kim So-eun. It explores the question of age differences in romance. It aired on MBC from August 20, 2011 to February 5, 2012 on Saturdays and Sundays at 20:40 for 50 episodes. 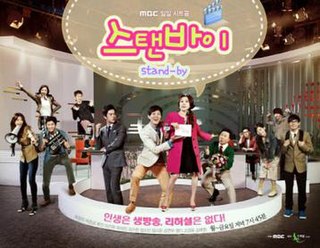 Standby is a 2012 South Korean sitcom that aired on MBC from April 9 to October 5, 2012 on Mondays to Fridays at 19:45. It is about the everyday stories of producers, writers and announcers working at TV11, a fictional broadcasting company.

King of Ambition is a 2013 South Korean television series, starring Kwon Sang-woo, Soo Ae, Jung Yun-ho, Kim Sung-ryung, and Go Joon-hee. It aired on SBS from 14 January – 2 April 2013 on Mondays and Tuesdays at 21:55 for 24 episodes. Based on Park In-kwon's manhwa of the same title, the same source material as Daemul, the drama tells the tale of an ambitious woman born into poverty who will let nothing stand in her way as she tries to become the First Lady, and a hopeless romantic who will sacrifice anything for her. But when she betrays him, he takes his revenge.

Hyun-woo, also spelled Hyeon-woo, is a Korean masculine given name. The meaning differs based on the hanja used to write each syllable of the name. There are 42 hanja with the reading "hyun" and 60 hanja with the reading "woo" on the South Korean government's official list of hanja which may be registered for use in given names. Hyun-woo has been a popular name for baby boys in South Korea for more than two decades, coming in third place in 1988 and fourth place in 1998. In 2008, a total of 1,943 baby boys were given this name, making it the third-most popular name that year.

The Beauty Inside is a 2018 South Korean television series based on the 2015 film of the same name; starring Seo Hyun-jin, Lee Min-ki, Lee Da-hee and Ahn Jae-hyun. It aired on JTBC from October 1 to November 20, 2018. 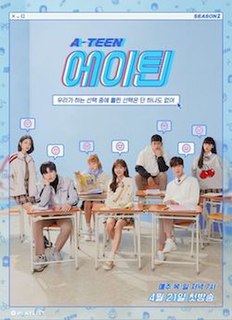 Shi, also spelled Si, or Shie, Shee, Sie, Sea, See, is an uncommon Korean surname, an element in two-syllable Korean given names. As given name meaning differs based on the hanja used to write it. There are 54 Hanja with the reading "shi" on the South Korean government's official list of hanja which may be registered for use in given names.